50%
Tweet
The man behind IBM's hardware strategy talks about future of the mainframe, the Power7 roadmap, the Itanium flap, and more.

Rod Adkins is senior Vice President for IBM's $19 billion Systems & Technology group and has spent almost three decades at Big Blue. I sat down with him Wednesday at IBM's Smarter Computing event on Wall Street to get his take on a number of hardware issues, including the future of the mainframe, the Power7 roadmap, and the squabbling between HP and Oracle over Intel's Itanium platform. Here's what he had to say.

Good afternoon, Rod. Your mainframe sales were down 31% year-over-year in the fourth quarter. Is that cause for concern?

The reason for those numbers is that it was a tough comparison. Fourth quarter 2010 [when IBM mainframe sales were up 69%, following the launch of the zEnterprise], was our most successful quarter in the history of mainframe sales.

If you look at the mainframe, it's following its historical pattern. It's largely hardware and capacity placements, and then you get to the middle and back end of the cycle and it becomes a lot more software and microcode upgrades.

NASA this week switched off its last mainframe, an IBM z9. That wasn't a sign to you that the mainframe era may be passing?

IBM exited the PC business in 2005, and some pundits argue that by the same logic, you should divest the x86-based System x line because it too has become commoditized. What are your thoughts on that?

We have clients of all sizes across many industries and we want to have the broadest set of capabilities. In some cases these clients want Intel-based products. Our approach is: how can we build the best Intel-based capabilities that are differentiated from others in the industry?

A lot of that know-how comes from our large-scale systems that we integrate down into System x. For instance, the ability to scale without compromising performance. Also, overcoming the per-processor memory limitations of the PC architecture. A lot of clients want to run in-memory-type applications. Our System x has the widest memory footprint. 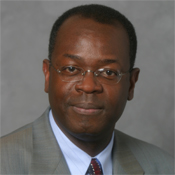 Can you talk about the roadmap for the Power architecture?

Some applications need stronger core performance, some are much more throughput-based. Power7 was one of the first microprocessors to deal with that dynamically. We also built in some interesting features like virtual memory, where the system thinks it has more memory than it has. You should expect the next generation [Power8] will incorporate even more features on the chip from the system. We introduce a new generation every three to four years, and Power7 launched in February 2010.

How will IBM, from a hardware perspective, participate in the tablet and smartphone revolution?

Part of our role is making sure the back-end infrastructure has the attributes to deal with different types of connected devices--to capture, manage, and store all of that data. Also, we have partnerships with some of the mobile participants, such as ARM, where we collaborate on design. We also partner with Qualcomm and others.

Agree; this interview asked substantive questions, and got substantive answers. Moreover, the subject did not assume that the reader is a CIO, or wants to think like one. There are *plenty* of working-level supervisors and technology managers below the C-suite that need to read good work like this.
Reply  |  Post Message  |  Messages List  |  Start a Board

Good interview with knowledgeable questions. People have been predicting the end of mainframe for the last 30 years. It never happens because System z is still the only platform on the planet that offers unbreakable security (EAL5, category of its own, security) and 30-50 year mean time between outages. You can cluster x86 servers to achieve mainframe level processing performance. You can also achieve similar reliability if you cluster x86 servers with automated failover (and an army of engineers to keep it running), but there is nothing out there that competes with System z security or simplicity through integration. You can run a massive enterprise on z with a couple of engineers. I think System z is going to experience a revival, and has been experiencing a revival, with System z running Linux. People are trying to create a mainframe-like architectures with DIY x86 builds for private clouds (migrating away from client-server towards centralization). System z is easier than the inherent complexity of x86 and the cost is about the same for capex and less when you figure in the massive opex x86 requires.

The way I think about it is x86 build = a bunch of people with shovels. System z = a bulldozer. People buy x86 based upon the rationale that a shovel (even a hundred shovels) is less costly than a bulldozer. True, but what is the cost of those hundred people carrying the shovels? What is the cost of integrating and managing those hundred people vs. just having a bulldozer perform the task with no need for integration, coordination, etc?
Reply  |  Post Message  |  Messages List  |  Start a Board
Editors' Choice
Hot Topics