SEARCH
A minimum of 3 characters are required to be typed in the search bar in order to perform a search.
Announcements
Alert
Got some free time? Grow your knowledge from the comfort of your computer for FREE!
Alert
Are you looking to stay on top of IT trends? Check out our FREE webinars and virtual events!
Alert
Planning for 2023? Be sure to check out our upcoming in-person events!
Report
How does your salary stack up? 2022 IT Salary Survey Results Revealed
PreviousNext
Social
3 MIN READ
News

10 Facebook Features To Help You Get Ahead
(click image for larger view)
A scathing report from research company Forrester advises marketers to ditch Facebook advertising in favor of other marketing opportunities. Although the social network has potential to redefine marketing, it said, Facebook has failed to do so. As a result, it creates less business value than any other digital marketing resource, it concluded.

Nate Elliott, report author and principal analyst at Forrester, wrote an open letter to Facebook CEO Mark Zuckerberg explaining why the social network fails to impress marketers and advising him on what Facebook needs to do to win back advertisers.

"I believe there's still time for Facebook to refocus its efforts and realize its enormous potential. To do that, you'll need to once again build bridges between companies and their customers, you'll need to fully leverage social affinity data within your ad targeting products, and you'll need to better listen to the marketers who drive your company's financial success," Elliott said. "But you must act quickly, before more marketers act on their growing dissatisfaction and start earmarking an increasingly smaller budget share to your company. I hope our research convinces you and your team to change course."

Forrester's report takes Facebook to task over two points: that the social network no longer supports social marketing and that it has become a traditional ad seller. Although Facebook promises it will better connect marketers to their customers, the social network shows 16% of each brand's posts to its fans, the report said. Forrester said Facebook has also done little to improve branded page formats and the tools marketers use to manage those pages.

Instead of supporting social marketing, the social has instead become a traditional ad seller, the report claimed. Although Facebook delivers as many as one-third of all display impressions online, fewer than 15% of Facebook ads use social data to reach more-relevant audiences. "Facebook's static-image ad units offer marketers less impact per impression than marketers could achieve with the ad units other sites offer," Elliott wrote. 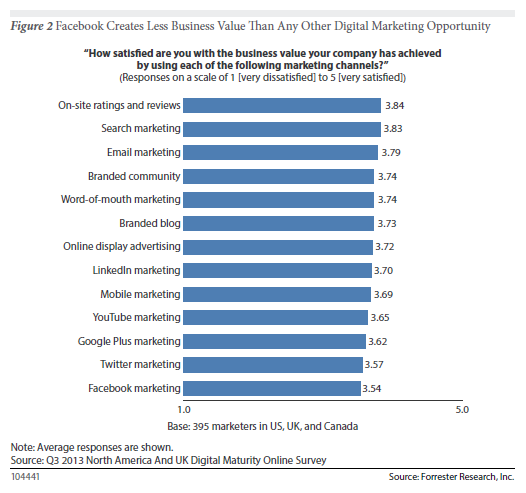 Facebook placed last in a list of 13 marketing channels by 395 marketers in the U.S., U.K. and Canada. Respondents were asked to rank how satisfied they were with the business value their company achieved. Social sites including LinkedIn, YouTube, Google Plus and Twitter all ranked above Facebook. Facebook did, however, achieve a score of 3.54 on a scale of 1 to 5.

"You'd expect a site boasting the largest audience and the biggest collection of data to fare well. But we found that Facebook offered less value than anything else on our list," the report said. "The least valuable tactic within Facebook? Those paid ads onto which Facebook has shifted focus."

Forrester also asked respondents how satisfied they were with six marketing partners, considering the guidance, education, service and support from each property and how much each contributes to their marketing success. Facebook placed behind Google, LinkedIn and Yahoo, with 51% reporting they were satisfied with Facebook as a partner, according to the report.

Forrester offered two recommendations for marketers targeting Facebook. First, pay attention to your Facebook statistics. "If the site really performs well compared with your other media buys, go ahead and spend money there," it said. "But marketers tell us Facebook ads generate less business value than display ads on other sites. It's time to make decisions based on facts, not on faith or fascination."

Second, Forrester says if you want genuine social interaction, add social tools to your own site. "Because Facebook fails to connect brands with the vast majority of their fans, it's time to look elsewhere," the report said. "Marketers tell us that adding social tools to their sites -- such as branded communities, blogs and customer ratings and reviews -- remains a powerful way to engage users through relevant interactions."

Do you agree with Forrester's negative Facebook findings? Tell us about your Facebook marketing experience in the comments section below.