SEARCH
A minimum of 3 characters are required to be typed in the search bar in order to perform a search.
Announcements
Alert
Got some free time? Grow your knowledge from the comfort of your computer for FREE!
Alert
Are you looking to stay on top of IT trends? Check out our FREE webinars and virtual events!
Alert
Planning for 2023? Be sure to check out our upcoming in-person events!
Report
How does your salary stack up? 2022 IT Salary Survey Results Revealed
PreviousNext
Social
5 MIN READ
News

10 Facebook Features To Help You Get Ahead
(click image for larger view)
Jive Software used its annual user conference to showcase new capabilities that will be arriving in the cloud version of its social collaboration platform in November. The company also previewed the Jive 7 release of the software version to follow in December. In addition, the company added JiveX, a new cloud offering for external communities focused on customers or business partners.

"We're trying to move as much of our customer base as we can to the cloud," Jive CEO Tony Zingale said in an interview. "That's going to be where we innovate first." On the other hand, Jive has always stressed the competitive advantage of being able to support more traditional enterprise software deployments, and that hasn't changed, he said.

Jive is an independent software company successfully competing with major enterprise systems providers like IBM and Microsoft that have been investing in social software for the workplace, as well as a horde of startups that all think they have a better way. Most of the startups are coming to market as cloud services, and Microsoft embraced that approach by buying Yammer and introducing a cloud incarnation of SharePoint, even as on-premises SharePoint remains its most dominant collaboration product.

Most Jive Software customers today run the software in their own data centers or through a managed hosting service provided by Jive, with enterprise IT able to make customizations and control the release schedule. By allowing customers to customize the code, however, Jive has hobbled the pace at which customers upgrade to the latest version. While Jive has been promoting the wonders of Jive 6 and starting to hint at what was coming in Jive 7, even some of its most loyal customers are back on a 4.x version or 5 at best. (Zingale said that should be changing because the company has discontinued support for the 4.x versions).

Cloud customers, in contrast, receive product enhancements on a quarterly upgrade schedule. The discipline of sticking to that quarterly schedule and producing a product that is more configurable, without the need to tweak the software code, is also leading to a better installed software product, said Brian Roddy, senior VP of engineering. "We arguably delivered more capability in this latest quarterly release than we did in all of Jive 5," he said.

Enhancements coming to the cloud first -- and the software soon after -- include:

-- A new social directory to simplify finding experts and talent within the company, with a LinkedIn-like capability for employees to endorse their colleagues and a better way to see how well others are connected within the organization. When you create a new group or project space, Jive can automatically suggest people to invite. 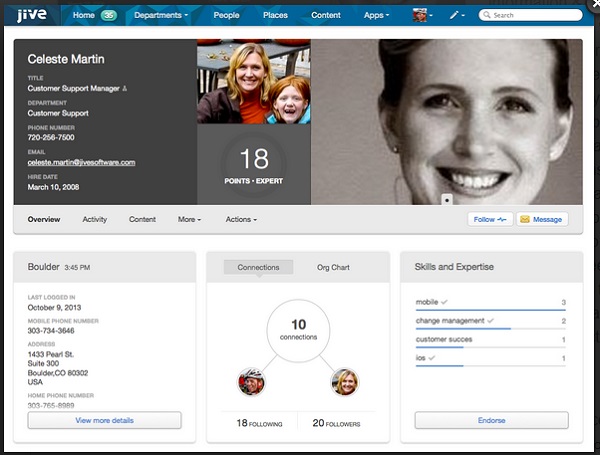 -- Impact metrics to make it easier to see the reaction to blogs and strategy documents, including sentiment analysis, reader statistics, readership by department, and a view of who shared or otherwise improved the distribution of a message.

-- Real-time messaging, including the ability to see who else is viewing the same document and start a conversation with them.

-- Improved social task system that integrates Producteev, a recent acquisition, directly within the Jive platform. People can create, assign and schedule tasks within Jive, including inside meeting notes, blogs, projects, profiles, spaces and groups. Additionally, users can now create tasks in-line in emails and direct them to the Jive community.

-- Google Drive is now integrated as a file storage and document management mechanism that can be embedded in Jive, similar to the Box integration Jive introduced last year. This includes bi-directional synch between Jive and Google Drive, with the ability to comment and mark versions as final or needing action.

-- Jive is also introducing integration with Gmail, including the ability to comment, interact, or create new Jive discussions from within Gmail. This capability is based on the Jive Anywhere browser plugin, which allows users to interact with Jive when viewing other websites or applications.

-- Customers can bring multiple streams, including Facebook and Twitter as well as Chatter and Yammer, into their Jive stream, for collaboration in multiple contexts.

-- An improved app for iPad and iPhone, which makes a greater variety of collaborative tasks accessible for mobile users. An app for Android should follow in a few months, Jive said, and mobile Web access has also been improved. 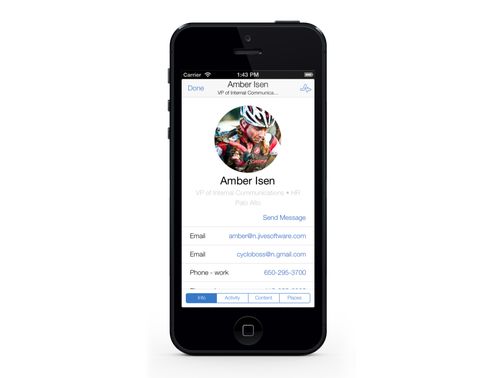 The cloud product Jive has offered to date has focused on internal social collaboration, but with JiveX the company has created a cloud offering for external communities. Roddy said bringing that side of Jive's business to the cloud took longer because when companies create an online community for customers or partners, they often want to customize it heavily not only in appearance but by embedding transactional applications.

Now that Jive believes it has a product sufficiently flexible for those scenarios, it is also adopting a pattern of introducing features for external communities first in the cloud. JiveX capabilities include integration of Facebook and Twitter streams, as well as CRM and marketing automation systems like Marketo. JiveX also offers improved analytics and gamification. Just as Jive for social collaboration is introducing an enhanced social directory for finding experts, JiveX includes a parallel capability for identifying "heroes" from a community of customers or partners.

Follow David F. Carr on Twitter @davidfcarr or Google+. His book Social Collaboration For Dummies is on sale now.