SEARCH
A minimum of 3 characters are required to be typed in the search bar in order to perform a search.
Announcements
Alert
Got some free time? Grow your knowledge from the comfort of your computer for FREE!
Alert
Are you looking to stay on top of IT trends? Check out our FREE webinars and virtual events!
Alert
Planning for 2023? Be sure to check out our upcoming in-person events!
Report
How does your salary stack up? 2022 IT Salary Survey Results Revealed
PreviousNext
Software as a Service
3 MIN READ
News

Its online services push requires a huge investment in new data center facilities.
InformationWeek Staff
Contributor
July 31, 2008
The corn grows taller in iowa--and the data centers, too. Google is investing $600 million in an under-construction data center in Council Bluffs that's slated to go into operation next year. Now, Microsoft plans to build its own data center 130 miles to the east, in Des Moines.

Microsoft's Iowa data center is the latest in a massive infrastructure build-out to support the company's software-plus-services strategy. It opened a new data center earlier this year in Quincy, Wash.; two more are slated to open this fall in San Antonio and Chicago; and another is being built in Dublin, Ireland.

Microsoft's fourth-quarter earnings, released July 17, show the growing investment in computer hardware and other IT infrastructure needed to back the emerging services strategy. Microsoft's Online Services Business (advertising, Live Search, MSN) attributed a $251 million cost-of-revenue increase, in part, to increased data center and equipment costs, while the Microsoft Business Division (Office, Dynamics) pointed to increased online services infrastructure expenses as being partly responsible for an $87 million cost increase. "Additional investments of several hundreds of millions of dollars are worth the cost, given the opportunity to participate in a market where the opportunity is measured in the tens of billions of dollars," says Microsoft CFO Chris Liddell.

For years, Microsoft leased much of its data center capacity, but it's increasingly building and managing its own as it anticipates growing demand for online services, including from business customers. Today, it sells single-customer versions of SharePoint Online, Office Communications Online, Exchange Online, and CRM Online; later this year, it expects to market SharePoint Online, Office Communications Online, Exchange Online, and Dynamics CRM Online through a true software-as-a-service, multitenant model. Microsoft's consumer services--search, MSN, and Windows Live, for example--are likewise hosted in its data centers.

It also wouldn't be surprising to see it push into Amazon EC2-like cloud-computing services. According to Reuven Cohen, co-founder of cloud-computing specialist Enomaly, who says he has spoken with Microsoft about its plans, developers will be able to package their apps in virtual machines in Microsoft's Windows-based cloud, which will likely be licensed on a usage basis. Microsoft isn't commenting. 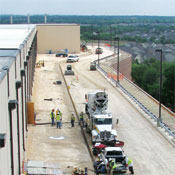 Data centers are under construction in Chicago, San Antonio (left), and Dublin, Irelend

New facility is planned in Des Moines, Iowa
'A NEW COMPUTER'
In July, Microsoft chief software architect Ray Ozzie hinted something could be up. "There's a new computer that is available up in the cloud, and it is going to be transformational in terms of how people write and build solutions," Ozzie said. "The problem that we are trying to solve is of a broader scope and is different than what you have seen our competitors come out with."


Why central Iowa? Des Moines features "strong fiber connections, low-cost power, and good local infrastructure," says Mike Manos, Microsoft's general manager of data center services. Yet "where" isn't the biggest issue. With IBM, Google, Microsoft, and others pouring capital into infrastructure, companies want to hear the "what" and "when" about the cloud-computing services these vendors will offer.