SEARCH
A minimum of 3 characters are required to be typed in the search bar in order to perform a search.
Announcements
Report
IT Enterprise Dashboard: This interactive data tool enables access to global research on IT budgets, business challenges
Event
Get in-depth insights & analysis from experts on all aspects of communications, collaboration, & networking technologies
Event
Data Center World is the leading global conference for data center facilities and IT infrastructure professionals.
Report
Find out what you need to know so that you can plan your next career steps and maximize your salary.
PreviousNext
Software as a Service
Slideshow 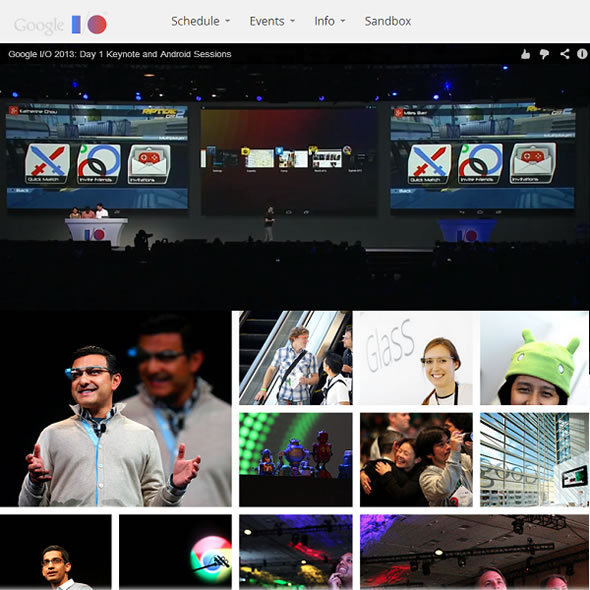 If you were expecting maybe a new Nexus 7 tablet, Android 4.x, Google Glass for $199 or even self-driving (or self-flying) cars, this week's keynote at Google I/O was a bit of a letdown. The presentation at San Francisco's Moscone Center was a three-hour endurance test for the live audience, which sat through a lengthy status report on Google's less flashy undertakings, including upgrades to the Google Play store, Chrome browser and OS, Google+ social network and the company's cash cow, Google Search. But even if audience members began to grow a little restless after, say, 120 minutes of demos and more demos, each was rewarded with a shiny (and very expensive) Google Chromebook Pixel.

Interestingly, Google didn't try to top the spectacle of its 2012 I/O event. There were no new tablet or phone announcements. No mysterioso consumer gear like the infamous Nexus Q, the media streamer that went MIA before it ever shipped. No bombastic Google Glass demos with skydivers descending onto the Moscone Center. Rather, the 2013 keynote ended on an earnest, relaxed tone, with Google CEO Larry Page waxing philosophic on an esoteric mix of questions from the audience.

Perhaps the biggest surprise was what the keynote didn't contain. In the weeks preceding the event, tech rumors hinted that Google would use the keynote to debut an updated Nexus 7 tablet, one with a higher resolution display, faster processor and a rear-facing camera. But said product never materialized. Nor did a new version of of Android -- not even a relatively minor, version 4.3 update -- that some Google watchers had expected.

Google Glass? Nothing new there hardware-wise. Maybe that's no surprise though, considering the flood of media attention that Google's prototype computing eyeglasses have gotten recently. When Saturday Night Live has fun at your expense, it may be time to give the PR effort a rest, at least temporarily. However, Facebook and Twitter announced Glass apps.

Another interesting aspect of the 2013 keynote: Google focused more on Chrome than Android, highlighting its efforts to add sophisticated capabilities to the former, while giving the latter relatively little attention.

Why the lack of Android and Nexus news? It's possible that Google is planning separate events for upcoming releases of these products, which are mainstream enough to warrant standalone media events. In fact, the techie developments highlighted at the 2013 keynote, such as some pretty interesting upgrades to Google+ and Chrome, might have gotten little media love (outside of the tech press) had Google devoted much of the event to Android and Nexus.

Check out our visual tour for more detail on the 10 most interesting announcements at Google I/O 2013.