SEARCH
A minimum of 3 characters are required to be typed in the search bar in order to perform a search.
Announcements
Report
IT Enterprise Dashboard: This interactive data tool enables access to global research on IT budgets, business challenges
Event
Get in-depth insights & analysis from experts on all aspects of communications, collaboration, & networking technologies
Event
Data Center World is the leading global conference for data center facilities and IT infrastructure professionals.
Report
Find out what you need to know so that you can plan your next career steps and maximize your salary.
PreviousNext
Software as a Service
Commentary

Our new survey delivers a good news/bad news scenario: Apps and Gmail are compared favorably one-to-one with Office and Exchange/Outlook. But a cloud stigma still sticks to Google in the enterprise.
Lorna Garey
Content Director, InformationWeek Reports
October 05, 2013
Responses to InformationWeek's new Google in the Enterprise Survey are shades of every cloud poll we've ever done. Security and data privacy worries? Check. Connectivity complaints? Check. Sunk IT investments going to waste? Most definitely.

But what's interesting is that commenters among our 368 respondents don't measure Google and its productivity suite or mail against LibreOffice or Yahoo. They consistently compare the company with Microsoft.

"End user satisfaction is low when moving from Microsoft stack as Exchange and Outlook [are] tightly integrated with Office suite," says an enterprise architect. "Google Apps is not yet functionally on par with Office, especially with PowerPoint; therefore there is still a need to use Office. Google Apps is strongest in its ability to enable real-time collaboration on docs, which is main reason for adoption in our company."

Key words there in case you missed them: "yet" and "real-time collaboration."

"There are a lot of good features in Google products, but not everyone appreciates them ... because they aren't exactly like Outlook," says another commenter. "Collaboration tools are very good. We had a difficult time getting people to collaborate using Microsoft products, so this is a big improvement."

Google also scores big as a visionary for enterprise IT: 22% say its product line is consistently innovative and often leads the industry versus just 2% dismissing it as all flash, better suited for consumers.

Rhese Hoylman, president of GTIN Managed IT, has been a Google Apps reseller for about three years, and he's not surprised. "There are two key areas Google is attacking," says Hoylman. "The Office suite and the foundation-level back-end collaboration tech that the business runs on."

If the future is server-based Office versus Google Apps, the data shows Microsoft has a fight on its hands. Google is doing a good job pushing the message of no hardware infrastructure, less maintenance and lower cost, says Hoylman.

"For $50 per user per year you're all-in with spam filtering, security, and calendaring and collaboration that were built for cloud from the ground up, easing integration," he says. "Google offers an Outlook migration tool that's not difficult to use, though it does take attention to detail. Done properly, you'll maintain folder structure. You can even use an Outlook front end."

Some survey highlights: 34% have already standardized on Chrome as a browser, and 78% rate Google Apps as good (47%) or excellent (31%) for mobility. The No. 1 reason for supporting Google products is end user demand, and about 80% plan to get some percentage of their business applications from Google within two years. Respondents are about evenly split on whether Google's tendency to "fail fast," quickly shutting down projects that don't perform as desired, is a concern when considering it as a business applications provider: 54% say it's a major concern (39%) or deal breaker (15%) versus 46% calling it a minor concern (32%) or not a worry at all (14%).

(Watch for in-depth analysis in our Oct. 21 InformationWeek digital issue, along with a cloud infrastructure showdown.)

There's room to improve for Google. For one thing, IT hates unexpected interface changes. Moving users from Outlook to the Gmail "conversation" mode can be a hard row to hoe, and offline operation is a work in progress. There are verticals, such as healthcare or finance, where a shared Docs folder is never going to fly.

But naysayers should remember this: Apple rode into the enterprise on the strength of consumer affinity that eventually flattened entrenched IT resistance. Google says that 22% of U.S. school districts are using Chromebooks and points to its 99.9% uptime service-level agreement, SSAE 16/ISAE 3402 Type II audit and remote mobile device management, among other features important to IT.

While 32% of respondents say they don't support Google Apps/Gmail because they have a volume Windows license and need to use it, those licenses will eventually come up for renewal. If Google Apps can do 80% of what you need, does that 20% functionality gap justify the cost of reupping with Microsoft? 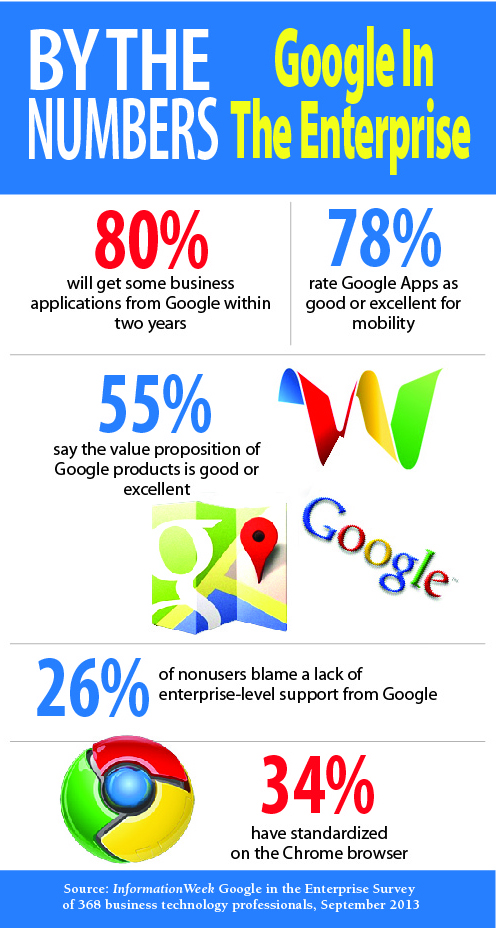