How does Microsoft's improved cloud filesharing and storage service stack up against the biggest names on the market? Consider a Dropbox fan's experience.
Kevin Casey
Contributor
August 21, 2012 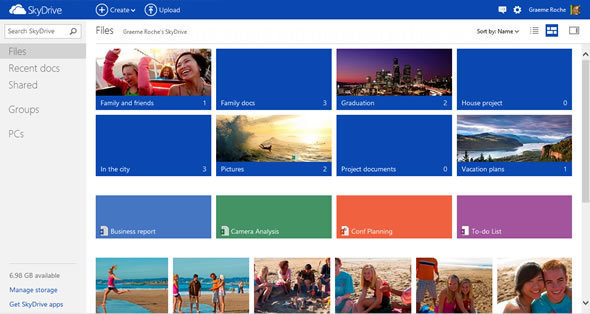 A confession: I kind of, sort of didn't know Microsoft's SkyDrive existed until recently, when the company's cloud storage and filesharing service began getting more attention amid the Windows 8 pre-launch buzz. It's been around in some form for a while, but I somehow missed it--even though I've always been Windows user, especially in business contexts, dating back to my first PC. Oops.

I suspect I'm not alone in my ignorance. SkyDrive hasn't had anywhere near the brand recognition of Dropbox, Apple's iCloud, and other better-known platforms. With Microsoft's recent makeover of SkyDrive, now seemed as good a time as any to try it out.

There are a few things about SkyDrive that caught my eye. Microsoft is giving away 7 GB of free space, which beats most of its competitors. That can quickly run out, but it's a fine starter package. Most of the stuff I'm going to store is relatively light: Documents, spreadsheets, and the occasional PowerPoint. Images are probably the bulkiest residents in my online storage accounts, though I tend to delete them once they've been shared or otherwise have served their purpose, backing them up locally instead. I don't typically handle much video or other large media files.

My primary use cases are filesharing, mobility, and backup. The latter is a redundancy tactic--I'd rather not trust everything to single cloud provider, but it rarely hurts to have an extra copy online if and when things go wrong in the office. My mobility needs, like a lot of other small and midsize business (SMB) users, have skyrocketed over the past couple of years. I have a main office but often work elsewhere, and not always from the same computer.

Some of my curiosity stems from the fact that I'm running Windows 7 on my primary PC, a relatively new laptop. I have no plans to upgrade to Windows 8 when it comes out, or at any point in the foreseeable future. Given that SkyDrive will be more closely integrated with the newest versions of Windows and Office, I wondered if that made it a bad fit for me. Similarly, I'm not a Windows Phone user--would mobility be hampered on Android and other non-Microsoft operating systems? I also wasn't convinced that browser interoperability was a safe assumption; it seemed plausible that Microsoft might try to steer users to Internet Explorer, and I typically use Google's Chrome.

I focused on Dropbox and Google Drive as comparison points for SkyDrive because they're the ones I currently use most often for both business and personal needs. There are, of course, plenty of alternatives out there. They include several that keep it strictly business, eschewing the consumer and crossover markets, for those paranoid about security and related issues.

I'm a regular Dropbox user for business purposes. Tons of other people use it, too, so if you ask someone share a file or vice versa via Dropbox, odds are they know what you're talking about. The 2-GB free account feels a little skimpy these days, though Dropbox offers plenty of upgrade options, including Dropbox for Teams, which may be a better fit for SMB users provisioning filesharing and storage on the company dime. (More to come on pricing.)

Google Drive, on the other hand, was sort of foisted upon me as a regular Google Docs user. I still tend to use it mostly as a function of Docs. It has already become sort of a disorganized mess, whereas I'm normally a neat freak when it comes to file management, online and off. I'm a Docs fan, and will likely continue to interact with Drive as a result--that's surely part of Google's strategy--but it has yet to convince me that I actually need it.

Is there room for SkyDrive in the mix? Could it replace something I already use? Read on for the details, but here's the bottom line: I started using SkyDrive as a healthy skeptic with modest expectations. I'm going to keep using it after this initial tryout because I was pleasantly surprised. Perhaps I'm not yet a full-fledged convert, but it has been useful and is worth a long look if you're in the market for online backup and storage--even if it's just an "extra" on top of what you've already got in place. And if you're going to jump on the coming release of Windows 8, the case for SkyDrive is probably even stronger.