250,000 students and faculty at Los Angeles community colleges will move to Microsoft [email protected] online communication and collaboration services after school system rejects Google Apps.
Paul McDougall
Editor At Large, InformationWeek
May 16, 2012
In a deal that shows how Microsoft can use its lock on conventional productivity software as a springboard into the cloud, the company beat out Google to secure a deal to provide the nation's largest community college system with online apps and collaboration tools. It's the latest setback for Google in Southern California, as the search giant is locked in a dispute with the City of Los Angeles over a troubled Google Apps implementation.

The deal follows an intensive, three-year evaluation period during which LACCD officials piloted [email protected] and Google's Google Apps offerings. "We wanted to find a standard way for everyone on campus to communicate," said LACCD CIO Jorge Mata, in an interview. "Our goal on campus is no lineups, no paper."

Mata said that, while Google Apps and [email protected] offered similar functions across a number of areas, what sold LACCD on Microsoft's educational cloud was the fact that the school system was already an Exchange and Outlook user. That meant that integrating [email protected] with in-house apps would be that much easier, and users would get a consistent experience whether they were working with the cloud tools or their existing software.

[ How do you choose the right online productivity solution? See: Google Apps Vs Office 365? It All Depends. ] 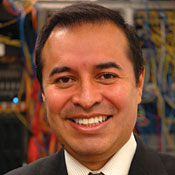 LACCD CIO Jorge Mata
"We wanted to make sure the experience was the same, as much as possible," said Mata. "If I'm a faculty member and I'm teaching a class, and then go to my office to conduct some business, and then to a lab to help a student, if all those are using the same kinds of themes and interface then that was something important to us." Mata added that if LACCD "was completely Google, then that would have been a major point [in Google's favor]."

Another requirement that Microsoft had to meet was for [email protected] to be accessible through multiple platforms, including Apple iPads and iPhones, and Google Android devices.

"Our students would love to have laptops and tablets, but if they can buy only one thing it's usually a smartphone," said Mata. [email protected] supports mobile management and synchronization through ActiveSync on Mac OS, iOS, and Android, as well as on Windows and Windows Phone.

He also said that Google's troubles with the City of Los Angeles didn't weigh much on LACCD's decision. Google and the city struck a $7.25 million deal in 2009 under which L.A. was to move to Google Apps for e-mail and productivity software. But the implementation is on hold after the LAPD and other security agencies complained that Google has yet to prove it can securely manage sensitive data. Mata said that there was a general feeling among LACCD's evaluation committee that Microsoft offered stronger user authentication tools than Google, but added that that wasn't the primary factor in the school systems' decision to go with [email protected] "The city was having major stability issues with its older technology (Novell GroupWise). Our Microsoft stuff was pretty reliable already," said Mata.

Mata said that price was not a factor in the decision, as both Microsoft's and Google's educational offerings are virtually free. Integration, however, isn't cheap. LACCD will spend between $500,000 and $1 million tying the software to its in-house IT systems. "We have to enroll 100,000 students. There is no way to do that manually so we had to procure some hardware and some consulting services," said Mata.

LACCD is working with SADA Systems for deployment and management.

Microsoft and Google are battling head-to-head for cloud market share. Neither company discloses its total cloud users or sales, but it's generally believed that Google holds the dominant share as it's been in the market longer. Microsoft's deal with LACCD, however, shows that it can catch up quickly if it can convince users that moving from in-house, Exchange-based services to the Microsoft cloud is the easiest path.

And while Microsoft won't make much money from the deal, given that [email protected] is a free offering, it ensures that at least 250,000 more users will be familiar with its cloud environment, which includes Office 365, once they enter the workplace.

"LACCD is committed to student employability and recognizes the value to its students of skills gained using Microsoft technology, and that the knowledge will serve them well as they prepare to enter the workforce," said Sig Behrens, Microsoft's general manager for U.S. education, in a statement.