Consumers can pre-order the $99 gaming system, which operates without the need for discs, downloads, or updates.
Esther Shein
Contributor
November 18, 2010 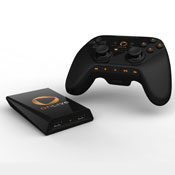 Users can play on-demand video games on their TVs with the OnLive Game System without having to use discs or do downloads or updates.

The $99 OnLive Game System comes with the MicroConsole TV adapter and OnLive Wireless Controller. Any OnLive game is included for free as a holiday promotion, the company said.

"The OnLive Game System marks the start of a new era for video games and home entertainment," said Steve Perlman, founder and CEO of OnLive, in a statement. "Not only is the OnLive Game System the fastest, simplest way to play, watch, and test-drive top-tier games instantly on the living room big screen, it also opens the door to a new world of options for gaming and entertainment -- from media-rich social networking and massive spectating to game portability across TV, PC, Mac, and mobile devices."

The system hooks up to a broadband Internet connection and a TV and takes only a few minutes to set up, the company said. The wireless controller provides video recording and the ability to pause, play, rewind, and fast-forward through videos. Up to four OnLive wireless controllers can be used simultaneously, along with an optional keyboard and mouse.

More than 35 games will be available at the product's launch, including Borderlands: Game of the Year Edition; Just Cause 2; Mafia ll; NBA 2K11; and Shaun White Skateboarding. OnLive games can also be played on a PC or Mac by downloading a small browser, the company said.

Games may be tested for free and then converted to a three-day or five-day rental or Full PlayPass, ranging in price from $4.99 to $49.99. Game rentals range in price from $3.99 to $8.99. Later this year, OnLive said it will add a monthly, flat-rate plan giving users access to a game library. OnLive can be ordered from the OnLive Store.