10 Must-Read Books For All Programmers - InformationWeek

20 comments
Comment Now
The road from newbie to professional developer can be long and bumpy. Here are 10 books (plus a few more) that can help guide you on the journey to success. 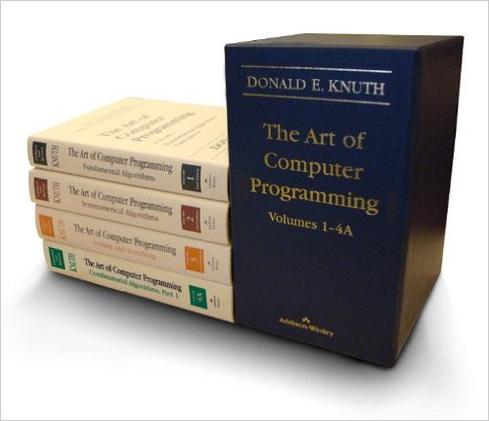 The Art Of Computer Programming

When you talk about modern computer programming, you won't get far before quoting, talking about, or riffing on Donald E. Knuth and The Art of Computer Programming. Knuth provided basic definitions for many of the terms and concepts we use in computer programming, and even those who ultimately disagreed with him have tended to define their ideas in opposition to his, rather than in a vacuum.

Now, there's nothing about this four-volume set that's light reading or easy going. It's a serious wade through complex ideas, though there are a fair number of jokes and witticisms in its 3,000+ pages. There's something else you should know: It's not finished. Knuth started writing it in 1962 and he's still working on it. I suspect that George R.R. Martin is using Knuth as a writing model.

It's fine for a few pages of codes. Beyond that maintenance or debug is painful for somebody else.

Web programming is a few lines of codes here & there. Most websites, mgt don't know what they want before they see it. Since it's changing constantly, it fits agile; young programmers.

So here is an interesting tidbit from a study done by Triplebyte, a company that matches engineers with startups, regarding the skill difference between those who have attended college vs bootcamps for coding. They found that bootcamp grads match or beat college grads on practical skills, defined as understanding a problem devising a solution and coding it).  But, college grads do better with algorithms, low-level systems and how a computer actually works.
Reply  |  Post Message  |  Messages List  |  Start a Board

Will be checking in to a couple of those books! I was surprised that these were not on th elist:

Additionally, there is a little known book called Code Craft which I found incredibly useful and interesting. Then one out of left field for this list: SOA: Principles of Service Design by Thomas Erl. "What? SOA?!?!" I found that book changed the way I though about coupling and design quite a bit, and has affected nearly all design work I do, SOA or not.
Reply  |  Post Message  |  Messages List  |  Start a Board

Not all of them though.

Programmers without college write clean, good codes too. But it's rare. I guess it depends on the first trainers.

If they establish bad habbits is a hard thing to change. Most programmers are very strong and opionated.
Reply  |  Post Message  |  Messages List  |  Start a Board

@TerryB, I agree that pretty much no one would mistake me for a script-kiddie: The photo, alone, should take care of that!

It may be that I'm unusual in that I like to read books in subjects for which I have some expertise -- from programming to photography to audio production. I think it's a good technique for getting better and getting better is typically a good thing.

And I do think the question of how people who don't go to university can improve will become more and more important as a growing number of people question whether a batchelor's degree is necessary for a programmer. I'm not sure the answer is "yes" and I'm not sure what hiring managers are going to do to replace the credential. I suspect that something like a programming portfolio is going to become more and more important.

I read it as a programmer and found it useful to understand my colleagues and myself.

I certainly think managers could also get some insight into cat herding.

I would say the book is targeted at both audiences equally.
Reply  |  Post Message  |  Messages List  |  Start a Board

I don't think @hho927 was calling you script kiddie, Curtis. I get what he meant though, people that go to ITT for two years and get "programming" degree. No question the books you mentioned would be useful to them.

Web programming certainly didn't create spaghetti code though. By far the worst code I've ever seen was the RPG people used to write back on IBM Sys 34/36 midranges. Nothing else compares to that.  I remember having to use the "structured goto" approach in RPG until newer versions implemented LEAVE and LEAVESR opcodes.

Server side web programming was a challenge to organize in the pure CGI days. That was first time I ever applied MVC, just to get some maintainability in the code.
Reply  |  Post Message  |  Messages List  |  Start a Board

@hho927, I'm going to disagree with you. While these might not be on university book lists I think they're useful for developers at different points in their careers who want to get better. Some of them -- the ones that present problems and help you work through solutions -- are for those who want to go beyond the basics taught in the universities. Others, such as those on design, are for those who want to build their skills beyond basic problem solving.

I suppose I'm going to disagree most, though, because no one's ever called me a "script-kiddie" (I was well into my career before the term was coined) and many of these were suggested by professionals well out of the script-kiddie pool themselves.

But I appreciate your opinion and I have a question: Which books have you found to be most helpful in your career?
Reply  |  Post Message  |  Messages List  |  Start a Board

@TerryB I also learned to program when at least some of my work involved spending time at a card punch machine. I think that I'd put most of these in the same category as the business books you talk about -- trying to understand what you're doing (and, in the context of the organization, why) so you can be better at the craft within the organization.

And I think some of them apply at different levels depending on how you approach programming. I like thinking about things from different perspectives because it helps me be open to trying new solutions to problems. Others have approaches that work best for them -- that's why looking at the books someone finds useful is so interesting!
Reply  |  Post Message  |  Messages List  |  Start a Board
Page 1 / 2   >   >>
Editors' Choice
Hot Topics