Golden disk images are simple, but they won't cut it as implementations get more complex. Here's the problem and what vendors are doing about it.

The key strategic decision when determining how to deploy and administer virtualized applications is the mode of packaging and distribution. The default--ever since VMware, the market-share leader in virtualization software, adopted the format--is disk images. Now known as virtual appliances, images are bundles comprising an operating system, applications, and configuration details that completely describe a VM's runtime environment.

While this approach, which is borrowed from deployment practices pioneered by enterprise PC client distribution, is simplistic, the benefit is that it's repeatable: Each new virtual application is identical to the golden master. IT likes repeatability, with good reason.

Unfortunately, problems arise once the pristine image is subjected to the vagaries of operating system patches, application updates, and configuration changes. Applications, once released into the runtime wild, tend to quickly diverge from the golden image.

There are a couple of ways to address this problem. One is a reprise of the Unix diff patch management approach, in which the current state of an application or system is compared against a prior snapshot. Much like image-based disk backup software, this technique can identify changes at the disk-block layer to create a delta image that can transform applications from one golden image to another.

This approach can be problematic, however. "If you can make an application totally stateless, then it works," says Shawn Edmondson, VP of product strategy at private cloud software provider rPath. But that's not possible for most applications. For deployed applications accumulating state information such as configuration settings or user information, IT ends up creating separate diff images for each VM instance. "Most people use golden images for new deployments but do updates the old-fashioned way," he says. Read: patch files and binary package distributions applied on each VM--which clearly isn't scalable.

Another, more flexible strategy entails using templates, which may include, for example, scripts to pull Perl packages from CPAN or build a standard J2EE stack. This tactic allows the same application model to be used on different cloud environments, both private and public. Such a template-driven approach facilitates updating stacks without rebuilding the entire bundled disk image. Nand Mulchandani, CEO and co-founder of cloud management system vendor ScaleXtreme, describes this approach as "dynamic VM assembly."

This strategy extends traditional software-building approaches, like makefiles and package managers, which focus on source code and application libraries, into the realm of VMs and virtual appliances. Developers build a detailed model of all the application and OS binary files, reminiscent of source code makefiles or Linux binary packages. It's no coincidence that rPath is a leading advocate of this approach since the startup was co-founded by an originator of the Red Hat Package Manager.

However, Mulchandani cautions against commingling application and operating system configurations if you plan on deploying to public clouds, since even IaaS providers using the same Linux distribution--say Red Hat or Centos--often use different kernel or library versions in their VMs. That's a critical detail that IT can't control. He also points out that application models can get quite detailed and that building them is painstaking, time-consuming work that can be impractical for large companies with scores of applications and thousands of machines.

So what's the answer? For now, that has a lot to do with whether you're using a public or a private cloud. Yes, SaaS products like ScaleXtreme's are trying to bridge that gap, but they are very new and are designed to do everything from their own service--so they don't integrate well, if at all, with existing internal management software. 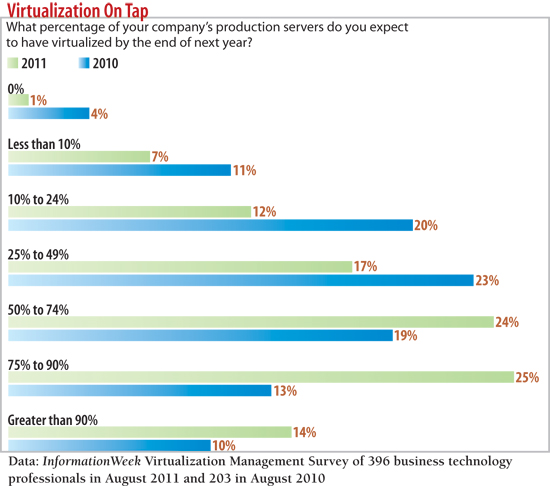