10 Cool Back-To-School Tech Tools
(click image for larger view)
On Wednesday Microsoft announced Bing for Schools, a program that offers an ad-free version of Bing for the classroom, along with the opportunity for schools to rack up points that can be used toward Surface RT tablet systems. But included in the Bing for Schools initiative is a program designed to increase students' digital literacy and critical thinking skills through daily lesson plans based on Bing's image of the day.

Each day, starting on Sept. 3, teachers can access lesson plans available for three different grade levels: K-4, 5-8 and 9-12. The lessons, which are developed by working classroom teachers, are aligned with the Common Core State Standards.

Matt Wallaert, a Bing behavioral scientist, told InformationWeek Education that the adoption of the Common Core standards has made it easier for companies like Microsoft to support teachers and students in K-12 institutions. He added that the Bing initiative may also help close the tech gap between what the Common Core State Standards require in terms of resources and skills and what many K-12 schools actually have.

The Common Core State Standards were designed to provide clear expectations about what students should be learning in each grade. The standards have been adopted by almost every state in the country and are just starting to be implemented widely in the classroom, replacing state-specific standards that have tended to vary widely in terms of both curriculum content and level of rigor. The Common Core State Standards emphasize critical thinking and the ability to justify that thinking orally and in writing.

Wallaert said the Bing for Schools lesson plans, which are hosted at Microsoft's Partners in Learning site, are designed to encourage and support critical thinking at all grade levels. "With Bing for Schools we take a big, beautiful image of the day and ask questions that require critical thinking," said Wallaert. "As the kids get older we tend to ask more complicated questions, and the searches required to answer them get more complex."

For example, a lesson focused on a photograph of the longjaw fish asks students in grades 5-8: 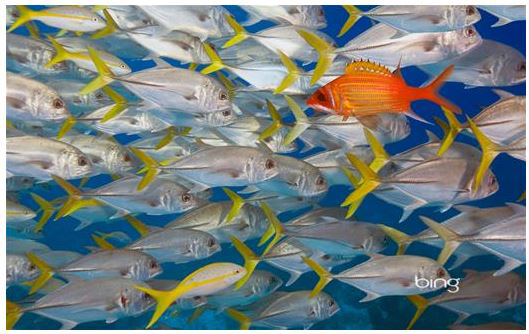 This longjaw squirrelfish looks a little outnumbered as it swims toward a school of horse-eye jacks. But rest assured: There's plenty of room for all the fish to swim on Lighthouse Reef off the shores of Belize. The reef is part of the Belize Barrier Reef, second in size only to Australia's Great Barrier Reef.

Other than the longjaw squirrelfish and the horse-eye jack, what other kind of fish is in the picture? Find three pieces of evidence to support your conclusion.

The lesson based on that same image for students in Grades K-4 also uses Bing Maps and asks students:

The lessons include the standards being met and clearly outline objectives.

Teachers in classrooms lucky enough to have a computing device for every student can assign the lesson as independent work. The Bing for Schools tasks could also be done as a center in classrooms that have a have only a few computers, or during computer lab time. The question of the day could also be projected from a teacher's computer if that is the only one available.

Wallaert also conceded that the abilities of students in the grade-level spectrums set forth by Bing for Schools range widely, noting that he has observed teachers effectively scaffolding students using the lessons based on their ages and skill sets.

He added that the lessons, which are designed to take about 10 minutes in the classroom, will take into account different factors, including geographic diversity and things that happened on a particular day in history.