Google, Microsoft, Spiceworks offer apps--along with a word from the sponsor.
Mary Hayes Weier
Contributor
May 04, 2007
You've heard the slogan that software is dead. Here's another spin: Paying for it is dead.

Ad-supported business software is catching on. Google and Microsoft have signed several hundred thousand customers since introducing free, ad-funded software in recent months, and they're not just small and midsize businesses. Procter & Gamble and General Electric are testing Google Apps.

Spiceworks reports 80,000 subscribers to its ad-funded network management software, available since last summer, and a company called Practice Fusion, which uses Google's AdSense program, lets doctors view electronic records for free. A third of businesses plan to use ad-funded software within the next two years, according to a survey of 475 IT and business executives by McKinsey & Co. and Sand Hill Group.

The emergence of ad-funded software raises issues new to IT, though long grappled with in the media world, about the potential intrusiveness of advertising. In this case, it's not moms fretting over fast-food commercials, but IT managers concerned about the impact of advertising on computer users.

Ads can serve a valuable purpose. Jon Chorney, systems administrator at accounting and consulting firm Master, Sidlow & Associates, is a big fan of Spiceworks. It's well-designed software, giving him a great view of the network, he says, and he occasionally finds information he needs via advertisements from Hewlett-Packard, McAfee, and others. The software runs on his company's servers; Spiceworks regularly downloads ads to the application.

So far, the ads have been unobtrusive, but Chorney's keeping an eye on them. "The visual experience is very important," he says. "If I see ads start to flash and blink, I'll call Spiceworks and say, 'Look, fellas, this is in the way.'"

What about the threat of bogus promotions and malware? Vendors dealing in ad-supported software insist controls are in place. Among Google's apps, just Gmail has ads. "We only put advertising in areas where we think it will be beneficial and useful to users," says Google project manager Rajen Sheth.

About 150,000 people subscribe to the free, ad-supported version of Google Apps, launched in February. Others pay $50 a year per user for the same software with tech support and more storage--and no ads. 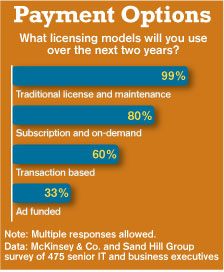 Microsoft's Office Live service is available in a free, ad-supported version or for $20 per month without ads. Most of the 350,000 subscribers choose the no-cost version, which comes with a hosted Web site, 25 e-mail accounts, 500 Mbytes of site storage, and ads from American Express, Best Buy, Dell, Sprint Nextel, and others.

"The challenge for the industry is, how do we make ads an integral part of the product experience and add value?" says Baris Cetinok, director of project management and marketing for Microsoft Office Live. "All of us are experimenting with how you can make the marketing message part of your experience without disrupting the experience."

One possibility: When a customer is developing a Web site, trigger a message that's both educational and an advertisement for a product or service that can help. Cetinok is less optimistic about the prospects for ad-supported software in large companies, since they tend to be willing to pay for more capabilities and a higher level of service.

But it's early in the game, and anything could happen. Just as subscription-based software crimped conventional software licenses, we're just beginning to feel the effects of software that costs nothing but comes with a word from the sponsor.