Apple upgrades MacBook Pros with faster processors and, for some models, lower prices and more RAM.

Apple on Tuesday continued its season of incremental Mac updates, announcing refreshed MacBook Pros with slightly faster processors and, in the case of its high-end configuration, a $100 price cut. In line with recent rumors, Apple also bumped up the base RAM in some models.

Apple's 15 inch Retina model, meanwhile, still starts at $1,999, but now boasts a 2.2 GHz quad-core i7 processor, bumped up slightly from a 2.0 GHz chip in the older model, and 16 GB of RAM. Base storage capacity is still 256 GB, however. Apple's top-of-the-line model now runs $2,499, $100 less than before. It offers a 2.5 GHz quad-core i7 processor, 16 GB of RAM, 512 GB of storage, and both Intel's integrated Iris Pro Graphics, and a discrete Nvidia GeForce GT 750M card with 2 GB of memory. As was the case before, only the high-end model features a discrete graphics card. Buyers can max out the 15 inch model with up to 1 TB of flash storage and a slightly faster 2.8GHz i7 chip. Those updates bring the price to $3,199. 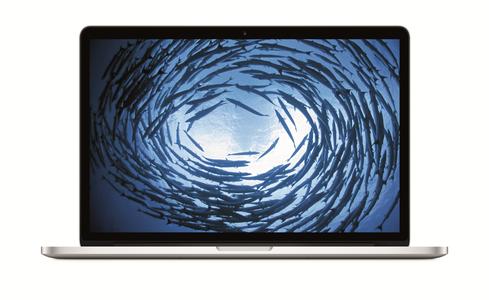 Apple also cut $100 from the price of its non-Retina 13 inch MacBook Pro, which hasn't been updated since 2012. The only model to still feature an optical drive, it now starts at $1,099 and offers a 2.5 GHz dual-core i5 processor, 4 GB of RAM, and a 500 GB 5,400 rpm hard drive. Apple claims this model is particularly popular among Windows switchers.

With Intel facing delays in its next-gen "Broadwell" chips, Apple has focused in recent months on modest spec bumps and small price cuts. Last month, the company launched a new, modestly powered iMac for $1,099. While not exactly budget friendly, the device is $200 cheaper than the previous entry-level model. Apple also refreshed its MacBook Air lineup at the end of April, with slightly faster processors and $100 price cuts.

Over the last year, numerous supply chain reports and rumors have maintained Apple is working on a new 12 inch MacBook that will feature a Retina display, a redesigned trackpad, and a design that is both thinner than the current Air, and built without a fan. Recent reports claim that Broadwell delays could push the device, originally alleged to be a 2014 release, into early 2015, and that substantially improved, Broadwell-based MacBook Pros might not arrive until the spring, if not later.

Despite its focus on stop-gap upgrades, Apple's Mac business outperformed the market in the most recent quarter. According to the company's earnings report, it sold 4.4 million Macs during its fiscal Q3 and enjoyed 18% year-over-year growth. Interestingly, Apple's figures contradict those released by research firms Gartner and IDC, both of which said Apple lost ground. Looking specifically at the enterprise, other data indicates that Macs remain far outnumbered by PCs, but that more and more businesses are supporting Apple machines for at least some employees.

Michael Endler joined InformationWeek as an associate editor in 2012. He previously worked in talent representation in the entertainment industry, as a freelance copywriter and photojournalist, and as a teacher. Michael earned a BA in English from Stanford University in 2005 ... View Full Bio
We welcome your comments on this topic on our social media channels, or [contact us directly] with questions about the site.
Comment  |
Email This  |
Print  |
RSS
More Insights
Webcasts
The Experts Guide to Ransomware Response
Multi-Cloud Data Management for Modern Applications
More Webcasts
White Papers
Ransomware Security Breach Summary: Food Production
Managed Threat Detection and Response
More White Papers
Reports
Are We Cyber-Resilient? The Key Question Every Organization Must Answer
Intelligent Outcomes Are Key to Business Resilience
More Reports

This argument always comes up, and in a narrowly-defined, austerely utilitarian sense, it's true: if you want to maximize power while minimizing upfront costs, building your own machine can be cheaper than buying a Mac. But that narrowly-defined perspective ignores the value of design and aesthetics, hardware-software integration, out-of-box experience, user comfort with the device, and so on. Perhaps you're the sort of person who dismisses all that as fluff, or who simply doesn't think Apple's hardware is as good as advertised. That's fine-- it doesn't have to matter to you. But to assume none of that matters to the larger market (or that if it does, it's all the result of marketing) is misguided. Certainly, Windows OEMs seem to have gotten the message-- after churning out anonymous commodity models for ages, they (with prompting by Intel) have focused much more on integrated experiences and new designs.