At this year's BoxWorks conference, Apple CEO Tim Cook sat down for a fireside chat with Box CEO and cofounder Aaron Levie.

Cook's appearance at the enterprise event was undoubtedly strategic. Business customers are becoming an increasingly important segment for Apple, which unveiled its iPad Pro tablet and Apple Pencil at a September press event.

Enterprise sales pulled in $25 billion for Apple during a year-long period that started June 30, 2014. While not a big number for a company of Apple's size, $25 billion is significant considering its longstanding reputation as a consumer-focused company.

Cook's approach to serving the enterprise focuses on the consumer. Enterprise hardware is no longer separated from consumer-focused devices, he noted. Apple's goal is to develop services and appeal to iPhone and iPad users who work on devices other than their office PCs.

Cook spoke to the power of collaboration, not among business customers but among the companies building and distributing new technologies. Apple doesn't have deep knowledge of enterprise software, he admitted. Partnerships with major players will help it create and distribute products people need.

He cited Apple's relationship with Microsoft as a prime example. The power of Microsoft services on Apple devices has already become reality; with services like Office and Skype for Business now available for Mac and iOS devices. Microsoft also made an appearance at Apple's September event.

"We still compete today, but Apple and Microsoft can partner on more things than they compete on," said Cook. "Partnering with Microsoft is great for our customers. That's the reason we do it." 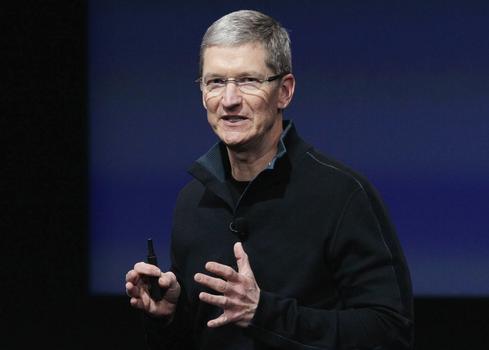 Its partnerships with IBM and Cisco are additional business deals in Apple's basket. Cupertino joined forces with IBM in July 2014 to bring mobile business apps and better support for Apple devices, to the enterprise.

With respect to the 2014 deal, Cook acknowledged the power of IBM to make Apple's products more appealing to business users.

"The kind of deep industry expertise you would need to really transform the enterprise isn't in our DNA," he said in a statement to Re/code. "But it is in IBM's."

As expected in a chat with Apple, mobile technology inevitably entered the conversation. Cook believes the best companies of the future will also be the most mobile ones. He doesn't think Apple is too late to compete in the enterprise because so many people primarily use email and browsing for work.

"It is shocking how many people haven't gone beyond emails and browsing," said Cook. This leaves plenty of space for Apple to push their devices with new work software it could develop in partnership with other companies.

Kelly Sheridan is the Staff Editor at Dark Reading, where she focuses on cybersecurity news and analysis. She is a business technology journalist who previously reported for InformationWeek, where she covered Microsoft, and Insurance & Technology, where she covered financial ... View Full Bio
We welcome your comments on this topic on our social media channels, or [contact us directly] with questions about the site.
Comment  |
Email This  |
Print  |
RSS
More Insights
Webcasts
Key technology trends in 2021 - Making these technologies work for your business
Strategies for Success with Digital Transformation
More Webcasts
White Papers
Sunburst: Impact and Timeline
MontanaPBS Shifts to Agile Broadcasting with Help from Raritan KVM Solutions
More White Papers
Reports
Intelligent Outcomes Are Key to Business Resilience
How IT Security Organizations are Attacking the Cybersecurity Problem
More Reports

@batye: I don't think there's anything necessarily wrong with that.  As the adage goes in Hollywood: "Don't come up with a new idea; come up with a good idea."
Reply  |  Post Message  |  Messages List  |  Start a Board

I think, whereas a lot of Apple's innovations are about making choice of carrier obsolete, Microsoft's innovations and business focuses are targeted to making device choice obsolete -- provided that people are still using Microsoft software and cloud solutions.
Reply  |  Post Message  |  Messages List  |  Start a Board

@Kelly22, I would say it also depends on the hype... or the iphone as status simbol for Corporate world..
Reply  |  Post Message  |  Messages List  |  Start a Board

@tzubair interesting point, I could not agree more... I would say we should not overlook BB by RIM... as I think one day it will come back...
Reply  |  Post Message  |  Messages List  |  Start a Board

I think the point about security is a good one, but Apple undoubtedly has the edge over Microsoft when it comes to smartphone adoption. People who want one business/personal phone will probably choose iPhone over Lumia. It's part of the reason Microsoft put its Office apps on iOS - so people are still using Microsoft, even if they have an Apple phone.
Reply  |  Post Message  |  Messages List  |  Start a Board

I <3 the Tim Cook quote about getting "an enterprise smartphone."  Additionally, it's worth noting that this is a philosophy Apple has long carried, since the Steve Jobs era -- and it's how the company got to be where it is today.
Reply  |  Post Message  |  Messages List  |  Start a Board

Eventually, though, those IT departments may relent and/or increased enterprise adoption leads to better enterprise application/security in the next model to stay competitive.

Look at the iPhone and the iPad -- fundamentally consumer devices to start out with, and CIOs used to *hate* the iPhone.
Reply  |  Post Message  |  Messages List  |  Start a Board

I don't think I agree with Tim Cook on this entirely. Yes, there are certain users who'd want the same device to become an "enterprise device" with a help of a gadget or two. Yet, the IT department within organizations may think differently. They may want a a dedicated enterprise device which has the proper security measures required as per the policy. This is where Microsoft has an edge in the area of enterprise devices.
Reply  |  Post Message  |  Messages List  |  Start a Board
Editors' Choice
Hot Topics