Can new "cloud" ERP options from Microsoft, Oracle, SAP, and Infor be compared to SaaS offerings? These four attributes must be questioned.

A cloud is a cloud is a cloud. That's what several leading enterprise resource planning (ERP) vendors would like you to think, and in some respects, perhaps they're right. But it's important to get beyond the buzzwords and understand the details of the offering.

Is that cloud ERP option delivered as software-as-a-service (SaaS), as a managed service (maintained by the vendor or partner in its datacenter), or as a hosted app that you might have to administer and manage yourself? The differences will affect your flexibility, agility, cost, and control over the app, so there are many questions you should ask.

The questions arise because leading providers of on-premises ERP applications, including Infor, Microsoft, Oracle, and SAP, have either introduced or stepped up their marketing of cloud offerings in 2013. Of course, they're doing this because many vendors are seeing flat or declining sales of on-premises ERP (at least in North America). SaaS ERP vendors, including NetSuite and Workday, are growing at double-digit rates. (Privately, Plex Systems and Kenandy also show signs of growth; both companies have landed $30 million-plus venture capital infusions in recent months.)

Have Infor, Microsoft, Oracle, and SAP created SaaS-based ERP systems? In some cases, yes; in some cases, no. In other cases, multitenant SaaS is the direction, but the vendors aren't there yet. Confused? This is only the start of the confusion, and it's why it's important to know exactly what you're getting.

We'll get to the questions you should ask in a moment, but let's start with a closer look at the latest offerings from four on-premises incumbents.

Infor recently announced UpgradeX, a program designed to help customers move to the latest versions of Infor applications by migrating to them in the cloud. The apps are not multitenant SaaS, but with UpgradeX, they're managed as a service by Infor and run on Amazon Web Services cloud infrastructure. Infor handles the patches and upgrades, and customers switch from capex licensing to the opex subscription model. The ERP options include LN, M3, Lawson, and SyteLine.

Infor has multitenant human capital management, asset management, and marketing management apps, but there are no SaaS-based ERP options -- yet. Stephan Scholl, the company's president, told us it is "moving toward" multitenant ERP offerings, but it will be 12 months or more before any options will be available.

Microsoft Dynamics GP and Dynamics NAV ERP systems have been hosted by partners for years, and they've been available on the Microsoft Azure cloud since June. Last week, Microsoft said its flagship Dynamic AX ERP application will become available on Azure by April, but this, too, will be hosting of the coming Dynamic AX 2012 R3 release. Hosting is supported by partners, and arrangements to handle everything from development, texting, and deployment to ongoing admin, patching, and updating vary by partner.

With the next major release of Dynamics AX (presumably AX 2015, set for beta release in 2014), Microsoft says it will offer both on-premises deployment and an Azure-based public cloud SaaS version. In this case, the cloud offering will be managed as a multitenant service by Microsoft. This is how Dynamics CRM has been offered for nearly two years, and Microsoft boasts that it gives customers the choice of running the same application on-premises, in a private-cloud (provisioned on your own datacenter or in a third-party one), on Microsoft's Azure public cloud, or in a hybrid combination. 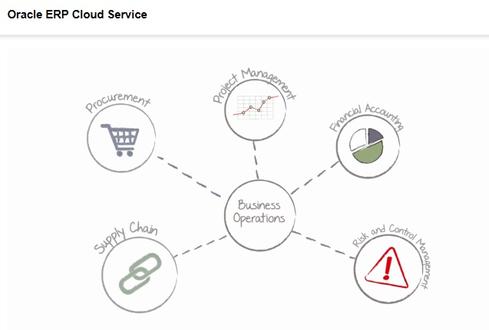 Oracle brands its cloud ERP option, Fusion, more generically as "Oracle ERP Cloud." The company reported at Oracle Open World in September that its ERP Cloud is in use by more than 50 customers (though it didn't name names). Fusion is very new, so the question here is the depth of general-purpose and industry-specific functionality and configurability.

Oracle said its ERP Cloud runs the same versions of software for all customers, with upgrades two to three per year. Also, "we do not co-mingle customer data in the same database as some define 'multitenant' to be." Oracle says its version of multitenancy is supported by the security features of the Oracle database, which include pluggable, independent container functionality introduced in the recent 12c release for a "scalable and secure multitenant model."

We haven't heard any accounts about SaaS-customer data being hacked, yet many would-be customers have fears about the security of the SaaS deployment approach, so Oracle's extra layer of security might hold some appeal for them.

A SaaS player, for example, might have high development costs and a small scale of economy, whereas an incumbent with lots of customers can quickly scale up hosting/managed services without doing much of anything to its software. You have to answer the questions about agility and cost, but if the flexibility and speed are good enough and if the costs are right, then don't get hung up on architectures.

In the long run, Darwinian forces will see the superior approaches prevail, but that process of natural selection may take longer than your committment to any one cloud app.
Reply  |  Post Message  |  Messages List  |  Start a Board
InformationWeek Is Getting an Upgrade!

How to Submit a Column to InformationWeek InformationWeek Staff 4/9/2021
White Papers
Annual Cybercrime Report
IDC Market Share: How the Network Is Used to Unmask the Adversary
5 Steps to Perimeter-Less Security: Adopting a Zero-Trust Model
The Essential Guide to Securing Remote Access
5 Reasons to Protect your VPN with Multi-Factor Authentication