Fortran: 7 Reasons Why It's Not Dead - InformationWeek

In the 1950s, IBM programmer John Backus invented a programming language called Fortran. It's still in use today, and here's what you need to know about it. 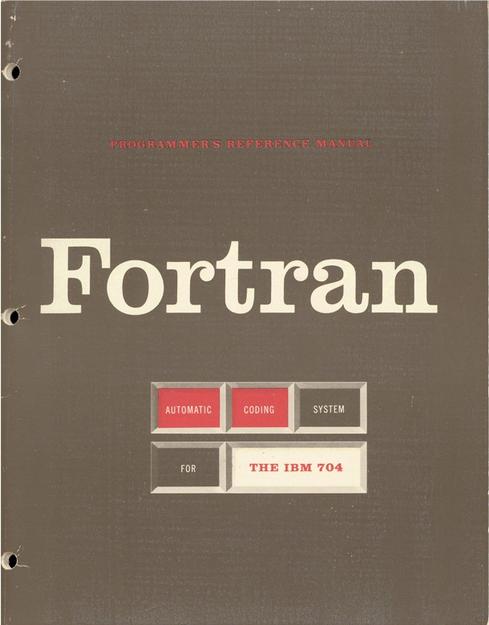 The list of high-tech tools in continuous use since the early 1950s isn't very long: the Fender Telecaster, the B-52, and Fortran.

Fortran (which started life as FORTRAN, or FORmula TRANslator) was first created by IBM programmer John Backus in 1950. By the time John F. Kennedy was inaugurated, FORTRAN III had been released and FORTRAN had the features with which it would become the predominant programming language for scientific and engineering applications. To a nontrivial extent, it still is.

Whereas COBOL was created to be a general purpose language that worked well for creating applications for business and government purposes in which reports and human-readable output were key, FORTRAN was all about manipulating numbers and numeric data structures.

Its numeric capabilities meant that Fortran was the language of choice for the first generation of high-performance computers and remained the primary development tool for supercomputers: Platform-specific versions of the language power applications on supercomputers from Burroughs, Cray, IBM, and other vendors.

[Is COBOL dead? The answer is no.]

Of course, if the strength of Fortran was in the power of its mathematical processing, its weakness was actually getting data into and out of the program. Many Fortran programmers have horror stories to tell, most centering upon the "FORMAT" statement that serves as the basis of input and output.

While many scientific applications have begun to move to C++, Java, and other modern languages because of the wide availability of both function libraries and programming talent, Fortran remains an active part of the engineering and scientific software development world.

So how can you get your hands on Fortran? It's actually pretty easy. This isn't an exhaustive list of all the Fortran compilers in the world, but rather a survey of some of the packages easily available to those who want to learn the language or use it in their own projects (plus a couple that you're likely to run into if you land that Fortran programming job you're hoping for).

If you're looking for a programming language in use on everything from $25 computers that fit in the palm of your hand to the largest computers on earth you only have a couple of choices. If you want that programming language to be the same one your grandparents might have used when they were beginning his or her career, then there's only one option. Welcome to Fortran, the once and future language of scientific computing.

Our tour starts on the next page. Let me know which packages I left out and how you're still using the Fortran skills you learned "back in the day." If you can do that while using a FORMAT statement, everyone here will be impressed. Really.

@parekhvs, thanks for bringing some updated information to the discussion! I'm pleased to hear that Fortran has moved past the rigors of FORMAT -- clearly, I need to spend more time with the modern versions of the language.

The IEEE's Supercomputing Conference is coming up soon -- it was always my go-to conference for running into wandering herds of Fortran coders. I'm curious: Can you give us an idea of the kind of applications you're coding in Fortran these days?
Reply  |  Post Message  |  Messages List  |  Start a Board

OK, @TomV424, you got me: I never had to learn Algol. We talked about it when we were designing the early Ada compilers, but I never wrote a line of code in the language.

And I think your description of Fortran is spot-on: No one would mistake it for a coding Ferrarri, but when you need to power through some serious numeric problems, it's hard to bear.
Reply  |  Post Message  |  Messages List  |  Start a Board

@pattrick, ahh, the heartbreak of a dropped deck if you forgot to run a marker along the edge first! I can still remember watching a grad student have a complete emotional collapse when he dropped a deck of a couple thousand cards on his way to the sorter...

But there was something very real about them. And you felt very official (or at least I did) carrying around an attaché case with your card decks, your green-bar printouts, your coding pads, and IBM flow-chart template. We might have still been learning everything but doggone it, we LOOKED like we knew what we were doing!
Reply  |  Post Message  |  Messages List  |  Start a Board

@cwaser10, Don Knuth deserves his own article. I read his amazing trilogy and still refer to his definition of an algorithm when I'm trying to teach the concept to new programmers.

I got to talk with Knuth in the mid 1980s. He's one of the three towering giants of information science (Claude Shannon and Bob Metcalf are the others) I've had a chance to talk with. I treasure the memories of all three encounters.
Reply  |  Post Message  |  Messages List  |  Start a Board

@rlhyde, thanks for the chuckle.

OK, I'm curious: Do you really think that Java is easier than Fortran? I know that the world has moved to OOP rather than procedural languages, but is that the only thing that makes you want to use Java rather than Fortran to teach kids?

I never used WatFor, though I know plenty of people who spent their lives there. I suppose I should have been grateful I wasn't having to chisel my code into blocks of stone...
Reply  |  Post Message  |  Messages List  |  Start a Board

@enviroman, thanks for the info on some of the current systems running Fortran-based code. Weather and environmental applications are precisely where I'd expect to still see Fortran used to a significant extent.

OK, now I'm curious about your Florida Atlantic days: You could submit batches twice a day but did you have hard-dollar accounts on the CPU? That's what they used to keep us in check at Alabama-Brimingham. For each class you got $25 work of CPU time for the term: If you used it up, you had to go beg the dean for more money. He usually said yes, but there was alway the chance that you might have found a way to really tick him off...

CPU cycles were priced according to time of day (and day of the week) so there was always a line at the card reader as the clock ticked toward 2300, when the CPU magically got much, much cheaper.
Reply  |  Post Message  |  Messages List  |  Start a Board

@pattrick, I did a lot of my Fortran programming on an IBM 4341 -- a mid-range system that was S/360 compatible. There was something kind of cool about going up to the card reader and submitting a deck (JCL followed by the Fortran code) but I'm very, very happy that I can work on a program today without having to drive down to the building where they keep the computer.
Reply  |  Post Message  |  Messages List  |  Start a Board

@Dan, don't you just love non-standard standards? I suppose it's nice to know that some things never change, but I think a lot of us would be OK with the kind of hassle you went through fade into the dim recesses of memory!
Reply  |  Post Message  |  Messages List  |  Start a Board

@jtaff922, I remember going to the press conference where Ken Olsen announced the Alpha: It was an amazing processor architecture and I'm sorry it brought down the company. Now, I'll admit that I'm truly astounded to see that you're still using a VAX -- that's a serious blast from the past. Even so, those were workhorse computers that powered much of the technical and scientific world through the 80s and 90s. It's cool that you still have the chance to work on one of the VAXen!
Reply  |  Post Message  |  Messages List  |  Start a Board

@Bud, Fortran was a great general-purpose language until you had to move data in our out. I still have nightmares involving FORMAT statements. As far as development today, if you find a shop that has a CRAY machine (or an IBM Blue Gene, or something similar) you'll find Fortran programmers. I don't believe that anything has ever come along that's better than Cray Vectorizing Fortran for writing software for Seymour's beautiful, bizarre systems.
Reply  |  Post Message  |  Messages List  |  Start a Board
Page 1 / 2   >   >>
InformationWeek Is Getting an Upgrade!