At its second annual Global Partner Summit on Thursday, Google launched a program to support its Google Apps technology partners and to help them create software that augments Google's cloud-based applications. The company also expanded and reorganized its Cloud Platform Partner Program into three tiers to provide differentiated partnership levels and to offer a path for any company to participate.

Google first set its eyes on the enterprise market in 2002 with the release of its Search Appliance and got serious about building a Google Apps partner ecosystem in 2005, adding an Apps reseller program in 2009 and a business-oriented Apps Marketplace in 2010. In parallel, Google launched App Engine in 2008 and the cloud-based application hosting service has since evolved into the Google Cloud Platform, which competes for corporate computing business with Amazon Web Services and Microsoft Azure, among other cloud-oriented offerings.

In 2005, Google said it had 2,000 enterprise customers. Today, it claims more than 5 million businesses use its products, from its search hardware to its cloud-based apps. Google said at the summit it has more than 10,000 Google Apps resellers. That's up from 6,000 in July 2012. The company also said Apps customers have added over 200 million installs of partners apps from the Google Apps Marketplace and that its Apps Marketplace now has more than 750 apps (a rough measure of Google-focused ISVs). It has admitted 161 partners into its Cloud Platform Partner Program. 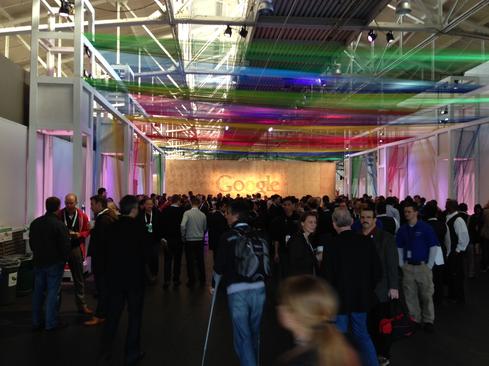 To join the Google Apps Tech Partner Program, independent software vendors (ISVs) must meet specific criteria established by Google and must sign a contract. Thereafter, they receive access to the same benefits Google provides to its resellers: partner community newsletters and webinars, favorable placement in the Google Apps Marketplace, and access to the online partner content and training materials.

Partnerships with ISVs and IT service resellers have been instrumental in the growth of Google's enterprise products. According to a report issued by consultancy Frost & Sullivan last month, 33% of Google Apps administrators overseeing corporate IT infrastructure cite third-party applications as important or very important in helping their organization adopt Google Apps. Half of them consider third-party apps helpful in making the move to the cloud. The Google Apps Marketplace, where ISVs can sell their wares, gives Google's enterprise ecosystem greater gravity.

Scott Strawn, an analyst with research firm IDC, sees the expansion of Google's partner programs as a sign the company is making progress in its effort to attract business customers."This is an indication that Google is getting to a scale where ISVs are saying it's worth our time to learn to implement Google's technology," he said in a phone interview.

Although Strawn said it's difficult to assess success in the enterprise market because Google and its competitors don't release detailed customer data, Google's enterprise customer base has grown large enough that Microsoft, long unchallenged as the primary source of office productivity software for businesses, has responded with Office 365, its Azure cloud platform, and a corporate reboot.

The fact that Microsoft's new CEO Satya Nadella previously headed Microsoft's cloud and enterprise group attests to the importance that the company places on enterprise cloud computing and on its competition with Google. One particular data point from Frost & Sullivan's report underscores the threat Google presents: In a survey of 1,158 IT administrators at companies that had implemented Google Apps, "only 42% of administrators plan to continue investing in Microsoft Office products for the majority of their workforce."

Once you "go Google," you may not go back to Microsoft.

"Google's goal with Google Apps is to provide solutions that meet the most common needs of users at work," explained Rahul Sood, director of product management for enterprise apps at Google, said in phone interview. These needs include messaging, storage, document editing, video meetings, and collaboration tools.

Sood said that Google's customers also need complementary line of business tools and industry-specific applications. That's why ISVs and partners are so important, he emphasized. They create and customize apps that interact with Google service APIs, like the Drive SDK or the Admin SDK. They deliver specific products and services that make Google Apps and Google Cloud Platform a viable choice for businesses with particular needs.

Google's decision to support its ISVs in the same way that it supports its resellers demonstrates the value partner companies bring to Google's ecosystem. Sood said Google wants to recognize partners for the quality of their work and for the success of their integrations by providing marketing and sales support. The ISV program will make it easier to discover apps endorsed by Google, he said.

One ISV benefiting from Google's attentions is UberConference, a company run by Craig Walker, who helped found telephony startup GrandCentral, which was acquired by Google and turned into Google Voice.

In a phone interview, Walker said being a Google technology partner "has been really, really helpful in that we have access to their APIs and developer relations."

Last month, UberConference launched a version of its software that integrates with Google Hangouts, turning Google's consumer-oriented video chat and conferencing service into something more suitable for businesses. The integration allows Hangouts users to add UberConference easily to a Hangouts session by invoking a sidebar with product-specific controls. It lets users join Hangouts from any phone, no Web connection required, and provides support for up to 100 users at a time.

Being a Google technology partner hastened the development process for UberConference. Walker said that while UberConference had already integrated Google Sign-In and Google Drive, the Google Hangouts app went particularly quickly. "We started working on it in early January and we launched it in early February," he said. "The Google guys were sure easy to work with and the APIs were very clear."

UberConference perhaps also benefited from Walker's past ties to Google and his familiarity with the technology. Nevertheless, with only a month's work, UberConference's Hangouts app has racked up 100,000 customer installations and almost as many conference sessions. Walker said the tight integration between UberConference and Hangouts makes all the difference.

At the Summit, DocuSign product manager Ryan Hutnick described how his company has integrated its digital transaction management service into Google Apps and Drive. He noted that consumer familiarity with DocuSign, through activities like renting an apartment or buying a house, has hastened business adoption. Sood, moderating on-stage, noted that this sort of viral adoption has tended to be the way Google usage spreads.

The integration of software applications from different companies isn't new, but with the shift toward cloud computing, integration takes on a new dynamic: The integration of cloud-based apps benefits Google, the partner, and everyone invested in Google's ecosystem. It gets magnified by network effects. It goes beyond the advantages of creating software that enhances a single app in a desktop environment.

"We think [our tech partner program] is going to be a win-win for all of us, for Google partners and customers," said Sood. The same probably can't be said for Google's competitors.

Thomas Claburn has been writing about business and technology since 1996, for publications such as New Architect, PC Computing, InformationWeek, Salon, Wired, and Ziff Davis Smart Business. Before that, he worked in film and television, having earned a not particularly useful ... View Full Bio
We welcome your comments on this topic on our social media channels, or [contact us directly] with questions about the site.
Comment  |
Email This  |
Print  |
RSS
More Insights
Webcasts
The Experts Guide to Ransomware Response
Multi-Cloud Data Management for Modern Applications
More Webcasts
White Papers
A Decade of Passive DNS
Global software company contracts with CBTS for Virtual CISO
More White Papers
Reports
2021 Application Security Statistics Report Vol.1
Immuta Data Engineering Survey: 2021 Impact Report
More Reports