Microsoft surprised us all when officials unveiled its HoloLens augmented reality headset at the tail-end of a media event primarily focused on sharing the details of Windows 10.

HoloLens is a set of glasses designed to project holograms onto real-world objects. By incorporating holograms into everyday life, the device creates tremendous ramifications across industries from gaming to business.

Since the HoloLens debut, Microsoft has shared minor updates on its development. At this year's Build conference, we saw how the headset can be used as a computer by projecting a Windows 10 desktop screen and apps on the walls and objects surrounding its wearer. Shortly after, Microsoft appointed a creative director for HoloLens Experiences.

[Windows 10 Launch: Later Than You Think]

"We are on a path to wearable augmented reality that will become a part of our everyday interactions and experience," wrote cofounder Raven Zachary in an email to InformationWeek. "While we are not there yet, it's an inevitable outcome."

Zachary is a mobile entrepreneur who sold his development business, Small Society, to Walmart Labs in 2012. He was toying with the idea of entering the virtual reality space, which he saw as more advanced than augmented reality, when Microsoft unveiled HoloLens earlier this year. It was then that he decided augmented reality would be more successful in business and everyday use.

Object Theory has a unique advantage in shaping the future of HoloLens applications. Cofounder Michael Hoffman, a former principal engineering lead from the Microsoft HoloLens Studios team, used to lead the creation of showcase experiences for the headset. Wanting to be closer to his family, Hoffman headed back to Portland, where he and Zachary went into business together.

The cofounders believe augmented reality will benefit consumers, but their real focus is on business use. Zachary sees the greatest early potential within industries that currently need to visualize data on-screen in 3D. Its uses would touch on physical network visualization, product design, architecture, space planning, and construction.

"I believe that this technology has real value in the enterprise, and there will be more opportunities to build mixed reality applications than we as a single firm could even hope to accommodate," explained Zachary. "We see a diverse software ecosystem emerging for this product."

"Mixed reality" is a blanket term used at Microsoft to explain the HoloLens space. The term encompasses a spectrum that includes reality, augmented reality, and virtual reality applications. 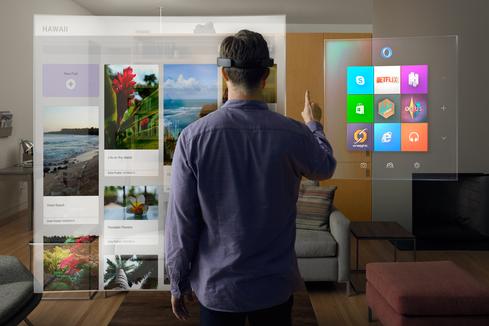 Object Theory hopes to build launch day-ready apps for HoloLens through partnerships with enterprises, brands, and vertical market companies. Microsoft has not yet announced the release date or pricing information for the headset.

The news of Object Theory's launch follows Microsoft's offer to award a $100,000 grant, and two HoloLens development kits, to each of five universities that submits a winning proposal for developing holographic computing solutions.

Microsoft's suggested areas for HoloLens applications include data visualization; psychology-related topics; the evolution of pedagogy in STEM, medical, and design education; interactive art and experimental media; and the future of communication and distributed collaboration. Applicants have until September 5 to submit their ideas.

Kelly Sheridan is the Staff Editor at Dark Reading, where she focuses on cybersecurity news and analysis. She is a business technology journalist who previously reported for InformationWeek, where she covered Microsoft, and Insurance & Technology, where she covered financial ... View Full Bio
We welcome your comments on this topic on our social media channels, or [contact us directly] with questions about the site.
Comment  |
Email This  |
Print  |
RSS
More Insights
Webcasts
Monitoring Critical Cloud Workloads
4 Practical Tips for Building a Data Lake
More Webcasts
White Papers
Guide to Enabling 5G Deployments
Ransomware Security Breach Summary: Food Production
More White Papers
Reports
2021 Email Threat Report
The State of Cybersecurity Incident Response
More Reports