IBM has added Microsoft's .Net language and runtime capabilities to its Bluemix platform, opening it to millions of Windows developers and declaring Bluemix the largest deployment of the open source Cloud Foundry development environment.

IBM is beating the Bluemix drum as the Cloud Foundry Summit gets underway Monday, May 11, for a two-day developer conference in Santa Clara, Calif.

Bluemix was among the first platforms-as-a-service, or integrated sets of development tools on an online platform. Launched in February 2014 as a publicly available service and available to developers on a trial basis well before that, Bluemix has been the IBM world's rival to Microsoft's Azure with its Visual Studio online tools and Google App Engine with its Python and Java options.

Bluemix is currently adding 8,000 developers a week to its total body of active users, Angel Diaz, VP of IBM Cloud architecture and technology, said in an interview with InformationWeek. 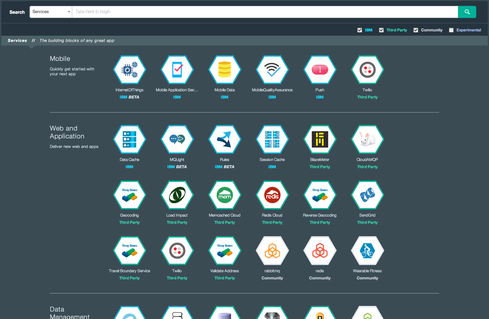 Bluemix provides an extremely broad selection of languages and tools, in part because it's sitting on top of Cloud Foundry. Cloud Foundry is an open-source project started by VMware, then spun out as part of Pivotal. It finally achieved independence with its own governance and foundation board last year. Cloud Foundry provides a framework for using Java, Node.js, PHP, Python, Ruby, and Google's Go programming language in supporting concurrent processes and parallelism in the use of the CPU. In addition, Bluemix provides support for the use of IBM tools on Power servers. That support makes the Rational C and C++ and other languages available.

Working with Microsoft, as of May 11 IBM has added to Bluemix a .Net Buildpack or set of tools, along with the .Net runtime, giving developers a wide mix of options: Java, the dynamic, interpreted languages (Ruby, PHP, and Python), and C and C# for the first time, said Diaz.

The popular C# language and .Net runtime will be commercially supported outside Microsoft's Azure and on another PaaS for the first time, he added. Microsoft made then open source code last November.

Cloud Foundry includes the Iron Foundry project, which attempted to bring Microsoft languages to the open source platform, but Diaz said that Microsoft and IBM engineers worked together to support the .Net technologies in their own fashion on Bluemix, without relying on Iron Foundry. That means .Net languages can be meshed into applications already using some of IBM's standard middleware and open source code, with integration and networking support from the platform, he said.

IBM was an early supporter of Java. "Java remains the number one language. But on Bluemix, you're not constrained to one language or API set… We don't want to put any barriers in the path of developers," Diaz said.

A third party, Cupenya Insights, can also be used on Bluemix. It allows a developer to define key performance indicators, using "metrics that matter to the business," and embed them in application code to illustrate how well or poorly its running in support of a business process.

Charles Babcock is an editor-at-large for InformationWeek and author of Management Strategies for the Cloud Revolution, a McGraw-Hill book. He is the former editor-in-chief of Digital News, former software editor of Computerworld and former technology editor of Interactive ... View Full Bio
We welcome your comments on this topic on our social media channels, or [contact us directly] with questions about the site.
Comment  |
Email This  |
Print  |
RSS
More Insights
Webcasts
The Changing Face of Threat Intelligence
Emerging Security Threats Your Enterprise Should Be Aware Of
More Webcasts
White Papers
Case Study: Scaled Up InfoSec Risk & Compliance
DDoS Attack Mitigation: Don't Sacrifice Speed for Security
More White Papers
Reports
The New Face of IT Automation
State of Endpoint Security: How Enterprises Are Managing Endpoint Security Threats
More Reports