A prominent Apple developer suggests the company's OS X software is so buggy it should be named after Microsoft's hometown. Apple acts as if it doesn't need to respond to the media, to developers, or to customers. For a company that wants a more substantial enterprise presence, that's a self-defeating strategy.

Craig Hockenberry, a principal at the Iconfactory, expressed his dissatisfaction in an expletive-laden blog post. Hockenberry said he reported problems with discoveryd during the Yosemite beta testing period. Beta testing is intended to catch significant software problems so they can be fixed. Despite the submission of detailed bug reports, Apple has not fixed the software or acknowledged the issues raised.

Hockenberry's bug report can be seen on Open Radar, a website created to allow developers to view the bug reports submitted to Apple by other developers -- because Apple does not track bugs publicly, despite the benefits of doing so. Other developers have taken the time to post similar reports about discoveryd. They include titles like "Information leak from discoveryd ('s address space) caused by valid DNS server responses" and "Memory leak / High memory usage in discoveryd."

Pointing to the networking problems that plagued Microsoft Windows in the past, Hockenberry wrote, "It's too bad that Apple only uses place names from California [for its OS names], because OS X Redmond would be a nice homage." (Defenders of Windows have noted that Microsoft's software is far better today than it was in previous iterations.) 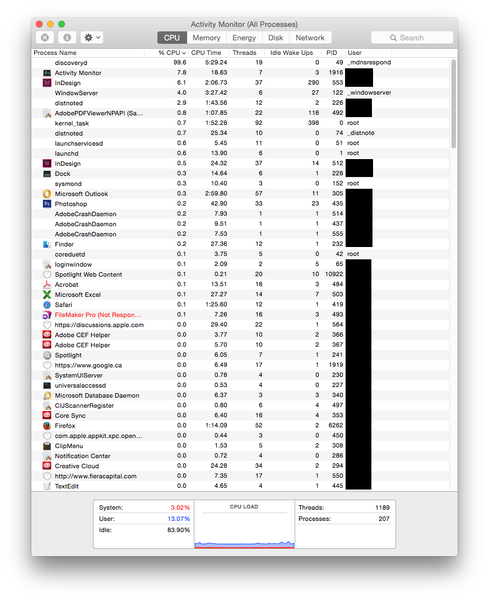 Marco Arment, the lead developer of Tumblr and the creator of the apps Instapaper and Overcast, endorsed Hockenberry's criticisms. "Yosemite is now six months old, these bugs still aren't fixed, and it feels like they probably won't be fixed anytime soon," he wrote in a blog post. "Yosemite is probably in minimal-maintenance mode as primary resources have likely moved on to headlining features for 10.11. This is what's so frustrating about today's Apple: If a bug persists past the early beta stages of its introduction, it rarely ever gets fixed. They're too busy working on the new to fix the old."

Such veiled threats evidently don't bother Arment, who slammed Apple for the declining quality of its code earlier this year.

Apple did not respond to our request for comment, underscoring Hockenberry's complaint about the company's lack of communication. But Apple does appear to be paying attention. A report published in February suggested that iOS 9 will focus on bug fixes. With any luck, the next version of OS X will also prioritize stability over features.

Apple's problem runs deeper than buggy software. It's simpler than that. Its problem is hubris. Apple acts as if it doesn't need to respond to the media, to developers, or to customers. It acts as if communication should be one way, from Apple to the public, at Apple's discretion. Particularly for a company that wants a more substantial enterprise presence, that's a self-defeating strategy.

Apple's hubris has been fed by its competitors. In recent years, those looking for alternatives to Apple's ecosystem can't really be blamed for favoring Apple's products over Google's or Microsoft's, or from shying away from the dedication required to run a Linux system.

Now the gap is all but closed. Microsoft, its past as a ruthless monopolist unknown to young consumers, shows signs of a second wind and new willingness to innovate rather than defend its cash cows. And Google, still free of regulatory entanglement, has turned Android and Chrome OS into appealing platforms, with the help of its partners. What's more, the emergence of the Internet of Things argues for greater interoperability, something better done in the open than from Apple's fortress of solitude.

Apple, it's time to be more open. It's time to use the tools you make to communicate.

Thomas Claburn has been writing about business and technology since 1996, for publications such as New Architect, PC Computing, InformationWeek, Salon, Wired, and Ziff Davis Smart Business. Before that, he worked in film and television, having earned a not particularly useful ... View Full Bio
We welcome your comments on this topic on our social media channels, or [contact us directly] with questions about the site.
Comment  |
Email This  |
Print  |
RSS
More Insights
Webcasts
Fintech at SaaS speed: Navigating the scale & security challenge
Bolstering Your Enterprise Cyber Risk Assessment
More Webcasts
White Papers
2021 Digital Transformation Report
Automate Your Cloud Compliance Journey in 6 Steps
More White Papers
Reports
Are We Cyber-Resilient? The Key Question Every Organization Must Answer
The Need for Speed: Second Generation EDR
More Reports