Microsoft's Dynamics CRM -- chief rival to Salesforce CRM -- has had 42 straight quarters of double-digit growth, according to the company. But Dynamics CRM Online is growing even faster, doubling in revenue in recent quarters, according to Microsoft.

That performance, reported Monday at the company's annual Convergence Conference, fits right in with the cloud-first, mobile-first ethos CEO Satya Nadella espoused in the show's opening keynote. The company's announcement on a pending Dynamics CRM spring release, set for May, was also laced with such details, including new mobile phone clients boasting deeper functionality yet requiring fewer clicks. There's a new mobile SDK on the way to better support native Windows, Android, and iOS apps. The Spring release will also offer Microsoft Social Engagement, an enhancement over the company's previously listening-oriented social tools.

What Microsoft didn't talk up, but that InformationWeek learned in discussions with executives, is that the Dynamics ERP business still doesn't include a production-ready public cloud offering -- something the company first started talking about in 2011.

Since then, Microsoft in 2013 brought hosted -- not public-cloud -- Dynamics GP and Dynamics NAV ERP instances to Azure infrastructure-as-a-service. At last year's Convergence Conference, Microsoft was still all talk and no deadlines on offering its flagship Dynamics AX ERP system -- the one with more than 20,000 customer firms -- as a true SaaS service on the Azure Public Cloud.

Finally, last fall, Microsoft made Dynamics AX 2012 R3 available as an Azure Service, but to this day it's only recommending it only for test and development work.

What's the holdup? Azure infrastructure upgrades, said Michael Ehrenberg, a Microsoft technical fellow and chief technology officer for Microsoft Business Solutions, in an interview with InformationWeek. To support production workloads, the Azure team is working on a Premium Storage option backed by fast drives and streamlined data access that will ensure fast performance within service-level agreements. Also in the works is an Azure Key Vault feature that lets customers provision and revoke keys that Microsoft can use for encryption. Big firms will also gain faster, bigger G-Series servers soon to be available. 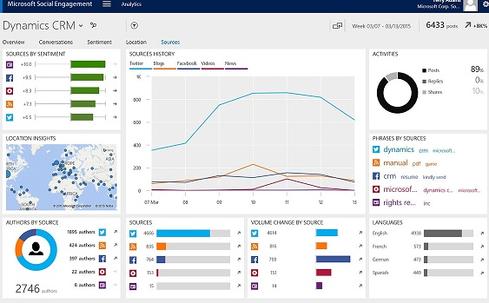 New social-engagement functionality, among a bevy of cloud-first upgrades to Dynamics CRM. Dynamics AX ERP, meanwhile, has yet reach production release on Azure.

"We have enormous dev-and-test usage and pent-up demand to turn on production deployments," said Ehrenberg. He declined to cite numbers, but admitted "a few customers" had moved into production without awaiting Microsoft's blessings. "Everybody talking about new deployments is planning to deploy on Azure, and the floodgates will start to open this spring."

Even customers currently running Dynamics AX on-premises are looking to move it into the cloud. For example, Mushtaque Ahmed, COO of JJ Food Service, a supplier to restaurants and caterers throughout the UK, says he wants the three IT people he has had running AX on-premises for years to focus more on developing new apps, not babysitting servers and applying patches and upgrades.

Cloud and mobile are a big part of the innovation at JJ Food Service. In October the company added a recommendation engine powered by the Azure Machine Learning service. The app compares live purchase orders in AX against order histories for key customer segments and then automatically suggests related items before the customer closes the order. The company also added the recommendation engine to new customer-facing iOS and Android mobile ordering apps introduced this month.

The company's next project is an IoT app that will monitor the company's 200 refrigerated delivery trucks via smartphone-connected Bluetooth sensors. Monitoring will ensure that temperatures won't fall below alert levels where foods like like ice cream and seafood will spoil as summer temperatures rise. Ahmed also wants to arm those smartphone-carrying drivers with mobile order forms so they can save customers the time and trouble of going online or calling. In fact, Ahmed says he may hire two more developers to work with AX, cloud, and mobile technologies to drive more innovation.

"We have other projects lined up, like a drive-through order-and-pickup application and process automation in the warehouse, but these things aren't available out of the box," he told InformationWeek. "Microsoft can run servers and give me a plain-vanilla version of AX, but we have to build custom apps like these to improve our efficiency."

It may be that Microsoft gets more bang for the buck driving CRM and marketing applications into the cloud as compared with ERP, which demands steeper infrastructure investment. But Microsoft is no longer protesting, as it has in the past, that most midsize ERP customers aren't so interested in moving into the cloud. Times have changed, as fast-growing cloud-ERP vendors Kenandy, NetSuite, Plex Systems, and Workday have been saying lo these many years.

Doug Henschen is Executive Editor of InformationWeek, where he covers the intersection of enterprise applications with information management, business intelligence, big data and analytics. He previously served as editor in chief of Intelligent Enterprise, editor in chief of ... View Full Bio
We welcome your comments on this topic on our social media channels, or [contact us directly] with questions about the site.
Comment  |
Email This  |
Print  |
RSS
More Insights
Webcasts
People Are The Most Important Part of Autonomous SOC
Nip Ransomware in the FUD: Detecting Attacks Pre-Encryption
More Webcasts
White Papers
Gartner Market Guide for Insider Risk Management Solutions
Tech Insights: Detecting and Preventing Insider Data Leaks
More White Papers
Reports
Intelligent Outcomes Are Key to Business Resilience
How IT Security Organizations are Attacking the Cybersecurity Problem
More Reports

Talking to ERP customers today, it seems that most are going to wait for the next release of AX -- which will be either AX 2015 or AX 2016 -- before committing to a move to ERP in the cloud. It just seems at odds with the urgency of the likes of SAP, Oracle and other ERP vendors to go cloud ASAP.
Reply  |  Post Message  |  Messages List  |  Start a Board
Editors' Choice
Hot Topics

Communications & Collaboration: 2024 (March 9-10)Network Security for 2021 and Beyond (April 29)Baking Cybersecurity Into Enterprise IT (April 29)