Microsoft on Tuesday announced a wave of new Dynamics CRM and ERP applications and enhancements, tying the marketing, social, mobile, and cloud-deployment enhancements to the theme of improving customer experience.

The new apps and features, announced in Atlanta at the company's annual Convergence Conference, include Microsoft Dynamics Marketing and Microsoft Social Listening applications based on the company's MarketingPilot and NetBreeze acquisitions. The products were partially integrated with Microsoft Dynamics CRM soon after their purchase in 2012 and 2013, respectively, but the new Microsoft branding denotes a completed transition to consistent, Office-inspired interfaces, and cross-application data access and workflows.

Microsoft is not alone in mixing marketing and social capabilities with CRM. Competitors Salesforce.com and Oracle have followed the same path. Salesforce.com acquired Radian6 for customer-sentiment analysis in 2011, and it added Buddy Media in 2012 and ExactTarget in 2013 to bolster its Marketing Cloud services. Oracle acquired Collective Intellect and Vitrue for social-analysis and social marketing in 2012, and Eloqua and Responsys in 2013 for marketing.

Microsoft Social Listening will be included with the next release of Microsoft Dynamics CRM Online, which is set for release in the second quarter. Customers deploying Dynamics CRM on-premises can add the social app for $20 per user, per month.

Microsoft often uses aggressive pricing as a weapon against its cloud rivals, and a new Microsoft Dynamics CRM Online Enterprise license might be the latest example. Salesforce.com's Sales Cloud Enterprise license is $125 a month, but Microsoft is including Microsoft Dynamics Marketing, Microsoft Social Listening, and a new Unified Service Desk (supporting social and more conventional service channels) in its $200-per-user, per-month deal. Salesforce.com sells its Marketing Cloud social and marketing services separately, and it doesn't publish the prices for those services.

Microsoft honored Atlanta-based Delta Airlines with a Customer Excellence Award at Convergence for its use of the Microsoft Dynamics Retail mobile point-of-sale platform. As part of the deployment, Delta has distributed Nokia Lumia Windows phones equipped with credit card readers to more than 19,000 flight attendants to support in-flight food and beverages purchases on 5,800 flights per day. The Mobile Airline app that Delta is using is based on the point-of-sale system and was developed by integrator Avanade. The platform also handles passenger manifests, frequent-flyer information, connecting-gate updates, and flight-attendant scheduling updates. 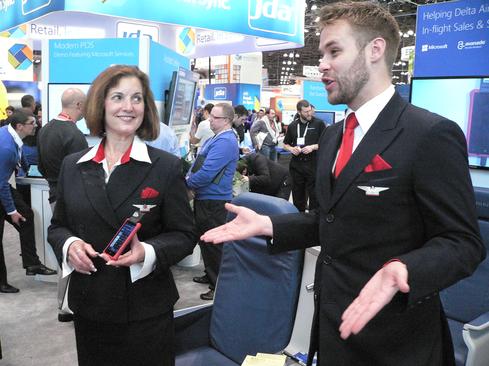 Microsoft announced a series of ERP upgrades at the event including a new applications and services framework for its flagship Dynamics AX ERP suite. The framework makes it easier for companies to develop and distribute mobile applications tied to AX, according to Microsoft. A new application for shop-floor operators, for example, lets these factory workers report on production using touch-enabled Windows tablets and phones.

AX 2012 R3, a release expected in May, supports deployment on the Windows Azure cloud platform via infrastructure as a service. Microsoft will also offer pre-configured AX instances on Azure, but in both cases it's apparently handled in a hosted (managed services) approach. Kirill Tatarinov, executive VP of Microsoft Business Solutions, was recently quoted as saying that multi-tenant AX services won't be offered until the next major AX release in 2015.

Microsoft's GP and NAV ERP applications run as hosted services on Azure and on multiple partner cloud platforms. Microsoft apparently isn't too worried about competition from Kenandy, NetSuite, Plex Systems, and Workday, as it's taking its time about delivering multi-tenant ERP services.

Doug Henschen is Executive Editor of InformationWeek, where he covers the intersection of enterprise applications with information management, business intelligence, big data and analytics. He previously served as editor in chief of Intelligent Enterprise, editor in chief of ... View Full Bio
We welcome your comments on this topic on our social media channels, or [contact us directly] with questions about the site.
Comment  |
Email This  |
Print  |
RSS
More Insights
Webcasts
[Free Virtual Event] Managing Apps in a Multi-Cloud Environment
The Best Ways to Stop Malware and Ransomware That No One Else Will Tell You
More Webcasts
White Papers
[Forrester Research] The State of Data Security & Privacy
2020 SANS Cyber Threat Intelligence
More White Papers
Reports
2020 State of Cybersecurity Operations and Incident Response
State of Endpoint Security: How Enterprises Are Managing Endpoint Security Threats
More Reports

Salesforce.com, a SaaS provider, has heretofore been one of the companies leading the charge in making pricing transparent, but as its app portfolio has grown, the new bits and pieces (like marketing social) seem to be less transparently priced. What's more, they have introduced all-you-can eat Enterprisewide license deals for those getting tired of keeping track of users, seats, and services requirements.

Subscription is it he cloud model, so, yes, it does encourage transparency generally.
Reply  |  Post Message  |  Messages List  |  Start a Board

Doug, I saw that "Salesforce.com sells its Marketing Cloud social and marketing services separately, and it doesn't publish the prices for those services."

I know this pricing obscurity for enteprise applications was prevalent in the past ... "call for a quote, volume discounts available." Do you think cloud/SaaS is forcing vendors like Oracle, Microsoft and Salesforce to be more granular and open about pricing for systems like CRM and ERP?
Reply  |  Post Message  |  Messages List  |  Start a Board

Do you see the Yammer integration into the Microsoft suites making any positive difference in usability or collaboration capabilities?
Reply  |  Post Message  |  Messages List  |  Start a Board

This is really a good case - Delta Airlines somehow form a kind of loose alliance with MS. The Enterprise Apps is a big market and it's different from normal consumer/end-user apps. If MS performed well, it may become one strong player in this market segment.
Reply  |  Post Message  |  Messages List  |  Start a Board

Vigin would-be deployment was a customer-facing implementation, and it wasn't on mobile devices, it was through seat-back entertainment screen systems. What's more, they deployment presented at Dreamforce a couple of years ago was actually a vision statement about what they were thinking about enabling. It wasn't actually real at the time. I've not seen a follow-up story on what was actually achieved, but I do know that Virgin is a Salesforce.com CRM customer.

This Delta Airlines deployment running on Dynamics AS and its Retail Point-of-Sale platform. It went live last September, and at this point Nokia Windows smart phones with card readers in the hands of more than 19,000 flight attendants. What's more, pilots are experimenting with Surface tablets to handle cockpit documentation that's required but that weights something like 20 pounds in paper form. The FAA has to review that deployment for six months before it can be approved. Delta said next steps will include selling seat upgrades onboard after takeoff -- something it couldn't do previously. Flight attendants are also required to have four-pound operations manuals onboard, and these, too, will be digitized and stored on the smart phones.
Reply  |  Post Message  |  Messages List  |  Start a Board

Doug, how would you compare the Delta project to similar efforts we have seen from Salesforce.com customers, such as Virgin Airlines?
Reply  |  Post Message  |  Messages List  |  Start a Board