Microsoft is opening up its Office software suite to rival platforms, including an interesting relationship with Apple's new iPad Pro and Apple Watch.

It seems that even Microsoft is susceptible to the Apple's magic. On the heels of Apple's Sept. 9 event, Microsoft announced its Office suite would support the new iPad Pro, along with the iPhone 6s, Apple Watch, and Apple TV.

Microsoft has updated its Word, Excel, PowerPoint, OneNote, Outlook, and Translator applications to take advantage of enhancements to the iPad Pro tablet, and to the latest iteration of software for the smartwatch -- WatchOS 2.

Apple's new iPad Pro is aimed more at business professionals -- the kind of buyers Microsoft wants. It comes with a 12.9-inch diagonal display, an A9X chip, and a price of $799, though the flagship model with WiFi, cellular, and 128GB of storage starts at a hefty $1,079.

In this case, Microsoft is fulfilling its promise to begin opening up more of its software to other platforms, including Apple's, as well as to Google Android. The idea is to move where the users are instead of trying to tie them down to a traditional platform based on Windows on a desktop. 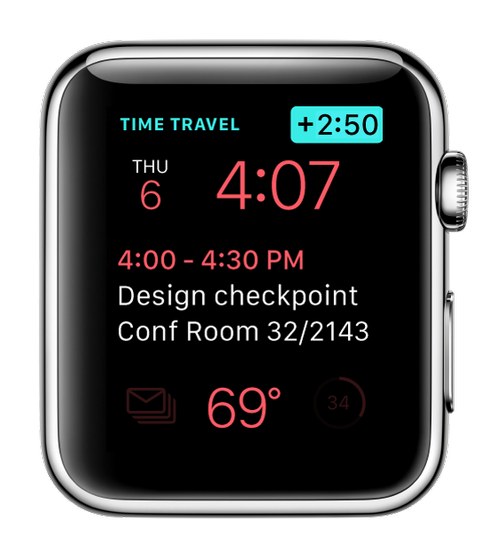 To help, Microsoft is packing in the features.

For multitasking, the Slide Over and Split View features on iOS 9 would let users reference their notes while working on a PowerPoint presentation or jot down a reminder in OneNote while catching up on email. Split View allows the use of two applications simultaneously.

Multitasking capabilities also include using Outlook alongside Word, PowerPoint, or Excel, for, as an example, editing a Word document attached to an email.

New inking tools for Office apps include pens, highlighters, thickness control, and a new color wheel, which would be deployed through Apple's $99 Pencil, a stylus that lets users mark up documents just as they would with pad and pen.

[Read about Skype coming to iOS and Android.]

With Time Travel, users can turn the Digital Crown of the watch to check Outlook calendar appointments for later in the day and for the following day.

In a boon for international travelers, the Translator update comes with a few nifty features, including automatic displays of your current country's common phrases. ("Pass auf!" equals "Pay attention!" in German, for example.)

With Time Travel, users can see phrases for a later time, when it would make more sense to use them, so you don't offer a "Guten Tag" at dinner. A recent or pinned translation can be played back later through the watch speaker.

Last month Microsoft rolled out a new batch of apps for Apple Watch and Android Wear, with the newest wave of wearable productivity apps bringing Outlook, Wunderlist, and Yammer (a quick-notifications service) to Apple Watch; OneNote to Android Wear; and Microsoft Translator to both devices.

Nathan Eddy is a freelance writer for InformationWeek. He has written for Popular Mechanics, Sales & Marketing Management Magazine, FierceMarkets, and CRN, among others. In 2012 he made his first documentary film, The Absent Column. He currently lives in Berlin. View Full Bio
We welcome your comments on this topic on our social media channels, or [contact us directly] with questions about the site.
Comment  |
Email This  |
Print  |
RSS
More Insights
Webcasts
Key technology trends in 2021 - Making these technologies work for your business
Zero Trust for a Work-From Home World
More Webcasts
White Papers
Why Add Security to Your Skill Set and How to Do It
How Hyatt Eliminated Bot Attacks Without Impacting their User Experience
More White Papers
Reports
Building the SOC of the Future
Assessing Cybersecurity Risk in Todays Enterprises
More Reports
Copyright © 2021 UBM Electronics, A UBM company, All rights reserved. Privacy Policy | Terms of Service