With Designer and Morph, Microsoft PowerPoint users now have expanded and simplified design options to give their presentations a more polished and cinematic effect.

Microsoft is bringing PowerPoint slides and presentations to a new level of sophistication with the addition of features such as a cloud-powered recommendation engine and smart animation technology.

The two new PowerPoint tools, called Morph and Designer, announced by Redmond in a Nov. 13 blog post automate the creation of slides and are designed to help users create polished slides and motion effects with a few steps.

Designer lets users create high-quality slides by dropping an image into the presentation. It then provides the user with several design ideas. 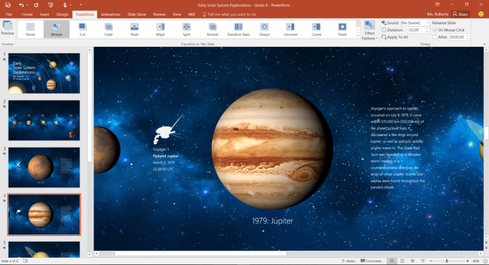 The tool, which was built in collaboration with professional graphic designers who helped develop more than 12,000 creative blueprints, will be expanded to work with additional slide types in the coming months, Microsoft said.

Designer applies cloud intelligence to analyze and identify the most compelling portion of images to determine which blueprints work best with the content.

For example, if the visual contains a natural scene, Designer can zoom, crop, and frame it. However, if the image contains a chart, it focuses in on the relevant region to ensure the important data is highlighted. Designer then selects from the more than 12,000 blueprints to provide multiple layout options to help users make the most of their image.

Morph creates cinematic motion by animating between slides, going beyond animation of regular text or images to animate 3-D shapes or be applied at a word or even character level, including text wrapping.

Users simply duplicate slides that they want morphed together, move the objects based on how they want them to animate, and click the Morph button under Transitions.

"PowerPoint Designer and Morph are new intelligent tools that work for you by automating the creation of slides and presentations, helping everyone get more out of Office," Kirk Koenigsbauer, corporate vice president for Microsoft's Office team, wrote in a blog post.

Exclusively available to Office 365 subscribers, the two features are available first in PowerPoint 2016 for Windows desktop and Windows Mobile. Microsoft said it plans to start rolling them out to other platforms in the coming months.

Microsoft also announced the launch of Office Insider, a program that allows Office 365 Home, Office 365 Personal, and Office 365 University subscribers to opt in to pre-release builds of Office 2016 for Windows and gives users access to the latest features and innovations on the platform.

Additionally, Microsoft said it is planning the launch of new capabilities and improved usability across Office 2016 for Windows, including personal finance templates in Excel; new sharing options across Word, PowerPoint, and Excel; and online video embedding in OneNote.

[ Microsoft's Surface Pro 4 is out. Should you upgrade? ]

Earlier in the week Microsoft announced a partnership with online file-sharing service Box to deliver an application for the Windows 10 operating system that will make file sharing across different Windows devices a lot easier.

The integration lets users work on Microsoft Office files directly from the app and get updates on changes with the recently updated Windows notification center.

Nathan Eddy is a freelance writer for InformationWeek. He has written for Popular Mechanics, Sales & Marketing Management Magazine, FierceMarkets, and CRN, among others. In 2012 he made his first documentary film, The Absent Column. He currently lives in Berlin. View Full Bio
We welcome your comments on this topic on our social media channels, or [contact us directly] with questions about the site.
Comment  |
Email This  |
Print  |
RSS
More Insights
Webcasts
People Are The Most Important Part of Autonomous SOC
Cybersecurity's Next Wave: What You Should Know
More Webcasts
White Papers
Why Add Security to Your Skill Set and How to Do It
451 Cloud Confidence Report
More White Papers
Reports
The State of DevSecOps Report
The State of Cloud Computing - Fall 2020
More Reports

I'm so glad to see Microsoft moving PowerPoint capabilities from the traditional bullet-point slide to the more multimedia presentation and information platform. PowerPoint is so limiting in it's ability to arrange ideas. That, in turn, has limited many meeting attendees to thinking only in linear bullets rather than creatively and abstractly. These, and future changes, will help PowerPoint move past it's historical bad reputation and become a truly useful tool for helping share complex and abstract ideas.
Reply  |  Post Message  |  Messages List  |  Start a Board
Editors' Choice
Hot Topics