Microsoft has launched a contest to find its next HoloLens app idea. The winner will be involved in the process of seeing their app become reality.

Microsoft is accepting ideas for its next HoloLens app in a contest announced Dec. 2 called "Share your Idea." The winner will have the opportunity to see their idea become (augmented) reality.

HoloLens is an augmented reality headset designed by Microsoft and unveiled during the Windows 10 debut event in January 2015. The gear enables its wearer to see and interact with holograms overlaid on physical objects.

Participants have until Jan. 11, 2016 to submit their ideas. Microsoft will provide information on the development aspects of HoloLens, and help identify use cases for the headset, so they can better understand which ideas will work best.

As they ponder ideas for the new frontier of augmented reality, Microsoft suggests participants consider whether their apps exercise the many capabilities of holograms. These include the option to shrink or grow, interact with gesture and voice commands, or emit sound.

Contest submissions will be shared on the Share Your Idea website. The community will be able to view, comment and vote on their favorites during the contest, whether or not they submit an idea.

After the January deadline, the development team will narrow down its submissions pool to three finalists and put them up on Twitter for a final vote. The winning idea will be built as a HoloLens app by the developers, designers and artists employed at Microsoft.

The contest winner will be closely involved with the app development process and participate in "weekly build reviews, Q&A sessions, and more," according to the website.

Once the app is created, Microsoft plans to open source the code so developers can build from it. At its product launch for Windows 10 devices in October 2015, Microsoft announced a HoloLens developer kit will be available for $3,000 in the first quarter of 2016.

While developers are playing the waiting game, Microsoft employees who are interested in developing for HoloLens have been given the opportunity to work with the augmented reality headset from home. 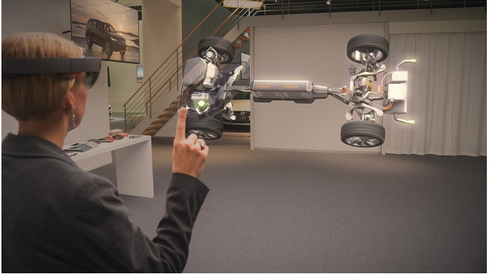 Microsoft has made some major strides with HoloLens since its January debut. The company recently announced a partnership with Volvo, through which it will use HoloLens to create a futuristic car-buying experience.

By bringing HoloLens into the auto showroom, Microsoft and Volvo hope to integrate "mixed reality" into the shopping process. With HoloLens, Volvo can show cars it has not yet manufactured, and customers can use the headset to browse different features on vehicles they might purchase.

This is all positive news, but it's worth noting there is a negative update on the HoloLens front. Microsoft has eliminated 60 employees on its Israeli HoloLens team, reported TechCrunch. The reason behind the job cuts is to decrease HoloLens development in Israel and bring it back to the United States.

Kelly Sheridan is the Staff Editor at Dark Reading, where she focuses on cybersecurity news and analysis. She is a business technology journalist who previously reported for InformationWeek, where she covered Microsoft, and Insurance & Technology, where she covered financial ... View Full Bio
We welcome your comments on this topic on our social media channels, or [contact us directly] with questions about the site.
Comment  |
Email This  |
Print  |
RSS
More Insights
Webcasts
Managing Your Enterprise Collaboration Platforms
Leveraging Infrastructure as Code to Streamline Security & Operations
More Webcasts
White Papers
The Buyer's Guide to Next Generation Cloud Security Posture Management
GRC Buyer's Guide - 5 Steps to Success
More White Papers
Reports
Future Proofing Your Network for 5G
2021 Digital Transformation Report
More Reports