Add Minnesota's state-run MNsure website to the list of troubled health insurance exchanges. The site launched October 1, but it's plagued by problems that Minnesota Governor Mark Dayton is pinning largely on software from IBM.

In a five-page letter sent to IBM CEO Virginia Rometty on December 13 and made public by the governor's office on Friday, Dayton detailed 21 specific problems tied to IBM's Curam software. "Your product has not delivered promised functionality and has seriously hindered Minnesotans' abilities to purchase health insurance or apply for public health care programs through MNsure," Dayton wrote. "I request that you immediately deploy whatever people or resources are needed to correct the defects in your product that are preventing Minnesotans from obtaining health insurance through MNsure."

IBM did respond immediately, meeting with state officials and sending dozens of employees to St. Paul to fix the site in mid December. In a statement issued on Friday, IBM said the majority of the concerns about its software had been addressed, and it noted that it's providing onsite services and technical resources -- at no cost to the state -- that go beyond the scope of its contract.

[Want the details on a failed commercial website running on IBM and SAP software? Read "Inside Avon's Failed Order-Management Project."]

"IBM is just one of several subcontractors working on this project," said IBM spokesperson Mary Welder in a statement. "The prime contractor, Maximus, Inc., has overall responsibility for the MNsure system including integration and testing of all the components prior to October 1."

Like other states choosing to run their own health insurance exchanges, Minnesota was under the gun to get its health insurance exchange site up and running before the end of the year in order to meet the coverage mandates of the Affordable Care Act (also known as Obamacare). The problems experienced on MNsure have included lost applications and inaccurate assessments of eligibility for financial assistance.

Maximus, of Reston, Va., is the lead contractor on the $46 million project, while IBM’s Curam software determines each applicant's eligibility for Medicaid and state and federal subsidies and tax credits. Acquired by IBM in 2011, Curam software is designed specifically for health and social program management, and IBM says it's used in more than 80 government projects around the world. 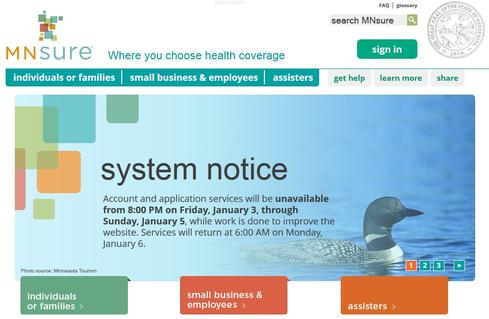 Minnesota's MNsure health insurance exchange site was down over the weekend as work continued to address technical problems.

IBM has been involved in a number of troubled government projects in recent years, including a welfare administration system overhaul that failed in Indiana in 2009, a health department payroll system project gone bad in Queensland, Australia, in 2010, and an unemployment compensation system abandoned by Pennsylvania in 2013.

In some of these cases IBM has portrayed itself as the deep-pocketed scapegoat for problems that went beyond its contract or control. In Queensland, for example, IBM said the project failed in part due to the state's business processes and data-migration efforts, and it pointed out that its fees of $25.7 million accounted for less than 2 percent of the $1.2 billion the state said it would cost to fix the system.

IBM is one of four technology providers on the MNsure project, but IBM said it's working closely with the other suppliers and with state agencies to fix the problems that remain. "We are providing on-site services and technical resources beyond the scope of IBM's contractual responsibilities to assist the State in resolving the remaining issues as quickly as possible," the company stated.

According to Republican State Representative Greg Davids, the letter from Dayton, a Democrat, was simply an attempt to shift blame away from his administration.

"For weeks now, Minnesotans have received conflicting information from MNsure about whether they have coverage, what coverage they have and how many more hoops they have to jump through to obtain coverage," Davids told the St. Paul Pioneer Press. "Enough is enough -- what happened to 'the buck stops here'?"

Yes, and the public sector operates quite differently in terms of the freedom a CIO has to choose contractors. GM can pick the best partner for the job, period. A gov IT exec needs to navigate a truly broken procurement system. Still, agree with Rob, it's bad form to go public like that.
Reply  |  Post Message  |  Messages List  |  Start a Board

Chris, I agree, shifting responsibility to the outsource contractor is dodging responsibility.  But it probably deserves mentioning: The CIO doesn't always hold all the calls at the table, so one needs be careful about adoping Syzgenda's philosophy too literally.
Reply  |  Post Message  |  Messages List  |  Start a Board

It just seems to me that, rather than take responsibility for fixing the site, the Minnesota governor is trying to relieve himself of all responsibility. And he's not pointing the finger at the prime contractor but at the biggest name subcontractor: IBM. From what Doug says, IBM's software was indeed at the root of the problem, or was one significant part of the problem, but outing IBM while it's trying to make good is bad form. It's not like IBM ignored the governor's letter. It's throwing resources at the problem. And where's the prime contractor in all of this?
Reply  |  Post Message  |  Messages List  |  Start a Board

Curam Software, the IBM unit deeply involved in this deployment, was headquarted in Ireland before it was acquired in 2011. Do you have racial/nationalistic slurs you also want to heap upon Irish people, WakjobDunfor?
Reply  |  Post Message  |  Messages List  |  Start a Board

This got me thinking about how now-retired General Motors CIO Ralph Syzgenda, one of the world's biggest buyers of outsourcing, always said execs can't outsource the responsibility, and he'd hold business unit CIOs accountable if the outsourcer they picked failed: "Every time you pick someone, you bet your job here," Szygenda said in our 2002 profile. "That's the way the marketplace is set up."

Multiple Minnesota news outlets broke this story on Friday -- the Star Tribute, MinnPost.com, Pioneer Press, etc. -- and none mentioned any letter to Maximus, a Reston, Va.-based firm that is working on MNsure under a federal grant. It is clear that IBM Curam functionality was part of the problem. The StarTribute reported that in late November, state and county officials were forced to double-check up to 40,000 applications to determine if people were incorrectly denied premium subsidies or coverage on public programs. About 1,000 consumers were ultimately notified that they were denied tax credits they should have gotten. Curam software determines eligibility for coverage, subsidies, tax credits, etc.
Reply  |  Post Message  |  Messages List  |  Start a Board

Doug, do you know if Minnesota's governor sent a similar letter to Maximus, the lead contractor? If he didn't, there may be something to the notion that he may be looking for a deep-pocketed scapegoat.
Reply  |  Post Message  |  Messages List  |  Start a Board
Editors' Choice
Hot Topics