Oracle Co-CEO Mark Hurd said the current IT on-premises operating model is unsustainable and much of IT operations will move to the cloud in the next 10 years.

Corporate revenues have stagnated, profits are not much better, and IT spending is in decline. That's according to Oracle co-CEO Mark Hurd, who used his keynote address at Oracle OpenWorld Monday to paint this less-than-cheery picture of the market forces and economic stress that is squeezing the C-suite, and how Oracle intends to help organizations gain some breathing room in this environment.

Perhaps that's been on Hurd's mind, too. Last month his company reported Q1 revenue that fell short of analyst projections, hit by slower software license sales as organizations shifted to cloud. And yet the company's small cloud division saw revenues grow by 29% for that quarter. The theme was repeated throughout Hurd's keynote.

For instance, Hurd noted in his keynote that organizations are cutting in areas that don't generate revenue, such as IT. They need to invest in the future of the business and services that drive revenue -- for example, creating digital products for customers.

Hurd pointed to longer refresh cycles for IT infrastructure and organizations running on applications that are an average of 20 years old. 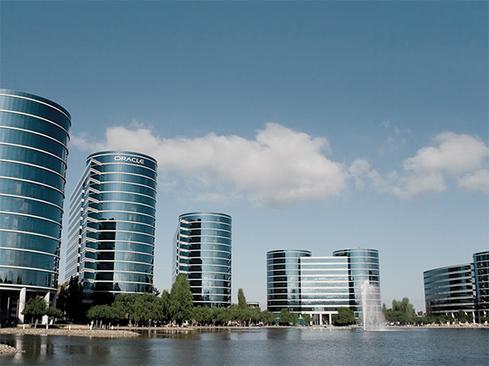 These big transitions and others are driving Oracle to shift its long-term planning to embrace the cloud. Hurd said the current on-premises IT operating model is unsustainable. That's an opinion echoed by others watching the space.

"His assertion that the on-premises IT delivery model is unsustainable is true, but it is ironic that Oracle's on-premises software products account for a large share of the technical debt that companies are dealing with," Paul Hamerman, vice president and principal analyst for business applications at Forrester Research told InformationWeek.

GE CIO Jim Fowler, fresh off his appearance at AWS re:Invent a few weeks ago, was one of a handful of C-suite executives from Oracle's customer companies who joined Hurd on stage. Other customers appeared via prerecorded video to talk about how Oracle is helping drive digital revenue-growing business.

Fowler repeated his previous pledge to move 70% of workloads to the cloud by 2020.

Hurd said Oracle was uniquely positioned to help companies achieve the move because it's the only company to offer a hybrid model (both on-premises and the cloud). Many of Oracle's announcements today in conjunction with Oracle OpenWorld delivered on that vision. Oracle announced new Oracle HCM Cloud capabilities, an expanded database cloud portfolio, Fusion Middleware enhancements for consolidation of on-premises and cloud, and analytics visualization cloud capabilities, to name a few.

These all are part of Oracle's plan to be a central part of the cloud market today and 10 years from now.

With that in mind, Hurd offered the following five predictions of where the industry will be in 2025:

"Oracle's focus has shifted away from traditional on-premises competitors, like SAP and Infor, and now seems primarily intent on competing with pure-play cloud providers like Workday and Salesforce," Hamerman said.

Jessica Davis is a Senior Editor at InformationWeek. She covers enterprise IT leadership, careers, artificial intelligence, data and analytics, and enterprise software. She has spent a career covering the intersection of business and technology. Follow her on twitter: ... View Full Bio
We welcome your comments on this topic on our social media channels, or [contact us directly] with questions about the site.
Comment  |
Email This  |
Print  |
RSS
More Insights
Webcasts
Getting SASE: What Every Enterprise Should Know
End to End Automation: A Game Changer for Improving Workforce Efficiency
More Webcasts
White Papers
2021 Data Breach Investigations Report (DBIR)
Cyber-Resilience Is a Must Have in the Next Normal
More White Papers
Reports
2021 Digital Transformation Report
Proven Success Factors for Endpoint Security
More Reports
Copyright © 2021 UBM Electronics, A UBM company, All rights reserved. Privacy Policy | Terms of Service