Oracle late Thursday reported double-digit cloud growth and modest hardware gains in the company's fiscal fourth quarter ended May 31, but it fell slightly short of expectations for on-premises software sales and profitability. Executives said the miss was attributable to the company's success in the cloud, where it now places itself as the second-largest software-as-a-service (SaaS) provider.

"We're focused, like a laser, on becoming the number-one company in the cloud," said Oracle CEO Larry Ellison in a conference call with financial analysts.

Oracle is already the dominant SaaS provider in categories such as marketing, ERP, and human capital management, Ellison said, and added that the company's salesforce is focused on overtaking Salesforce.com in CRM and extending the company's lead over Workday in HCM and ERP.

Oracle changed its financial reporting practices to break out SaaS and platform-as-a-service (PaaS) revenues, for database and Java-development services, separately from software revenues and cloud infrastructure as a service (IaaS). SaaS and PaaS revenues were $322 million for the quarter, up 25% year over year, and $1.12 billion for the year, up 23% over fiscal year 2013.

Oracle CFO Safra Catz said the company's SaaS and PaaS revenues are approaching a $2 billion run rate. Salesforce.com, the leading cloud provider, had revenues of $4 billion in its 2014 fiscal year ended January 31. Both Salesforce and Workday have reported faster cloud growth rates than Oracle in recent quarters, but seven-year-old Workday finished its fiscal year 2014 at just $468 million in revenue. 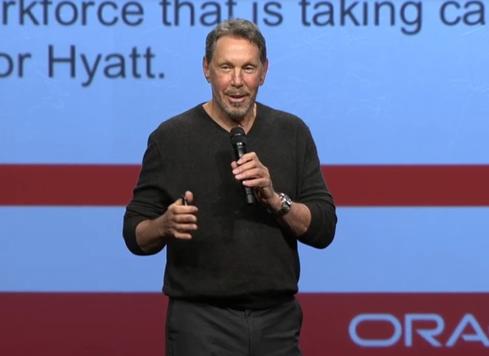 Oracle's comparatively small IaaS business, for cloud compute and storage services, was flat at $456 million for the full year. This is where Oracle competes with the likes of Amazon Web Services, but Ellison dismissed it as a low-margin category that Oracle operates "for the convenience of customers" choosing Oracle SaaS and PaaS offerings.

News outlets including Bloomberg have reported this week that Oracle is in talks to acquire Micros, a maker of CRM systems and other software for retailers, restaurants, and hotel chains. Financial analysts put the value of that deal at $5 billion, and Micros's $1.2 billion in revenue would bring growth to Oracle's on-premises software business.

But Ellison, Catz, and Oracle president Mark Hurd focused almost entirely on Oracle's cloud prospects during Thursday's call. Discussing Oracle's position as a supplier to other cloud vendors, Ellison said that "most cloud companies are based on Oracle database," noting that Salesfore.com is "based entirely on Oracle database" and that SAP's SuccessFactors also runs on Oracle. (An SAP spokesperson followed up to say that SuccessFactors "has migrated the majority of its key internal systems to SAP Hana.")

Seeing a "huge opportunity" and citing healthcare software supplier Cerner as an example, Ellison predicted Oracle will see a wave of software vendors using its multi-tenant 12c database to move their wares to the cloud. And because Oracle can supply all the hardware, middleware, and applications the company needs to run a comprehensive cloud, Ellison predicted the company can run those services highly profitably.

"We buy electricity and buildings, but we make everything else ourselves," he said.

Oracle turned in its second straight quarter of hardware systems revenue growth, with a 2% increase over the prior-year quarter to $1.4 billion, though hardware system revenues were flat for the full year at $5.3 billion. Catz hailed it as a success given that "all our major [hardware] competitors shrank."

Yes, you're right, Doug. Good technology is being acquired and Oracle is no slouch, for that matter, at converting applications to the cloud. But I still think the major application effort of the future is going to start on a platform in the cloud and be composed of many cloud services -- PaaS composed of many software -as-a-service features, with Docker-style deployment. We might be talking future custom applications versus standard, baseline business applications. Just don't know how many "standard business applications" there will be in the future.
Reply  |  Post Message  |  Messages List  |  Start a Board

Micros is no cloud vendor. See my story on that deal, which will see Oracle buy a mini me -- lots of software maintenance revenue, little new software sales next to nothing in cloud (unless you call hosting cloud). As for Oracle, as I reported, both Salesforce.com and Workday have higher growth rates, but Oracle's scale does help it. 25% growth for a $2 billion business stands up against 75%+  growth for Workday's $500 million business. But it won't keep pace with Salesforce.com's 30% growth in its $4 billion business.
Reply  |  Post Message  |  Messages List  |  Start a Board

Not true organic growth in the cloud. Oracle simply buys a few cloud companies every year and then says we are growing by XYZ% year over year. That looks like an illusion while the likes of Workday and Salesforce seem to be capturing core ERP business and building everything around it. As Workday and Salesforce build it out from bottom up, it will be difficult for these acquired-n-patched-up companies to compete with comprehensive ERP suite with strong backbone. After Micros & few other deals this year, Oracle will claim it is bigger than Salesforce. But Salesforce is building out a strong platform that will eventually eat away at Micros business that they currently don't own such as retail and hospitality business.
Reply  |  Post Message  |  Messages List  |  Start a Board

Charlie, I think you're forgetting that Oracle -- like IBM and SAP -- is not just cloud washing legacy applications, its also acquiring SaaS businesses. Eloqua, RightNow, BlueKai, Taleo, and Responsys are just a few examples -- before you get to the company's Fusion Apps. At SAP they point to acquisitions including Ariba, Hybis, and Success Factors. So what's this "below the surface" stuff you're refering to and would you say you just can't buy your way into the cloud?
Reply  |  Post Message  |  Messages List  |  Start a Board

When we say Oracle has turned the corner on cloud, I think that corner looks like one on the street in front of Apple headquarters, Infinite Loop. The next few years will show there's a big difference between putting legacy applications in the cloud and building applications for the cloud. Not that Oracle doesn't have a great future in applications... but there's more going on below the surface here than can possibly be captured in an Oracle application roadmap. Ten years from now, Oracle will still be pulling in buillions and still rounding that corner.
Reply  |  Post Message  |  Messages List  |  Start a Board

Most cloud companies are based on Oracle databases? What about Google? How about Facebook?

I don't know if I can believe that statement. Sure, maybe Fortune 500 companies looking to move to the cloud might use Oracle. But huge cloud companies usually make their own systems from scratch.
Reply  |  Post Message  |  Messages List  |  Start a Board

Despite Oracle's cheery assessment of its cloud fortunes, its stock is getting hammered today because Wall Street cares more about revenue and profits. The latter is driven by new software sales, 25%, and software updates and support revenue, 47%, while cloud, including SaaS, PaaS, and IaaS was only 4% of revenue in FY 2014. Hardware products and support accounted for 14% of revenue.
Reply  |  Post Message  |  Messages List  |  Start a Board

Doug, any mention from Ellison on the much-touted 100 cloud apps from about 18 months ago? I remember at the time that it seemed like Oracle's first direct actions toward a cloud ecosystem ... but not a lot of mention since. Oracle big wigs have been big on telling (rather than showing) on the cloud, so I'd be interested to see how they're moving on that former big app splash (particularly given Ellison's previous stance on the cloud fad). (you wrote about it here)
Reply  |  Post Message  |  Messages List  |  Start a Board
Editors' Choice
Hot Topics