Salesforce.com's biggest announcement of Dreamforce '13 is Salesforce1, but is it a branding exercise or a game changer?

Salesforce1 is the big story of Dreamforce 2013, but just how real is it and what will it do for Salesforce.com customers?

Unlike Dreamforce announcements of years past, Salesforce1 is shipping upon announcement, available in the form of dowloadable mobile apps. But there's more work to be done if it's going to live up to its billing as a "next-generation platform" that will connect partners, employees, customers, and customers' customers through any device with "state-of-the-art, consumer-grade functionality."

It's tough to boil the facts out of a few whirlwind, buzzword-packed keynote presentations. But Q&A sessions with Salesforce executives and interviews with customers and partners helped us fill in some of the fuzzier aspects of the platform. So here's a closer look at what it brings and what it promises.

As we've reported, Salesforce1 is a unifying, mobile-friendly, API-rich wrapper around everything Salesforce.com offers. The company is mobilizing everything, pointing to a Gartner forecast that 90% of enterprise applications will be mobile-accessible as well as desktop-accessible by 2017. Today that figure stands at closer to 20%, so Salesforce1 is, first and foremost, an effort to deliver better out-of-the-box smartphone and tablet apps while also making it easier to develop custom mobile apps.

[ Want more on the importance of application programming interfaces? Read APIs: Why You Need A Strategy Now. ]

Benioff confessed that the company's first attempt at "next-gen" mobility, Salesforce Touch, was a "spectacular failure." But what Salesforce learned from that effort, he said, was that it needed many more application programming interfaces (APIs) to expose the company's many services and capabilities. Salesforce co-founder Parker Harris said the company was determined to provide those APIs without forcing customers to recreate or change things like custom objects, custom fields, or VisualForce custom interfaces created years ago but still in use.

Salesforce services, customizations, reports, dashboards and other parts of the ecosystem that weren't accessible before on mobile devices are now "just there" in a new Salesforce1 Mobile App, according to Benioff. This broadly-capable new app replaces the Chatter Mobile app (and Benioff says the company has been secretly beta testing Salesforce1 under the "Chatter" badge for weeks). Salesforce also introduced at Dreamforce new Sales Cloud, Service Cloud, and Marketing Cloud mobile apps said to be built on Salesforce1's new APIs and mobile capabilities.

Salesforce1 serves five constituents: developers get "10 times more" APIs; partners get new tools to make their apps mobile; end-users get the all-new mobile apps; administrators get a new "Salesforce1 A" mobile admin app for provisioning (and freezing) end users; and customers get what Salesforce describes as a more cohesive and connected experience across the Salesforce ecosystem -- including acquired bits like Heroku, ExactTarget, Buddy Media, and Radian6. 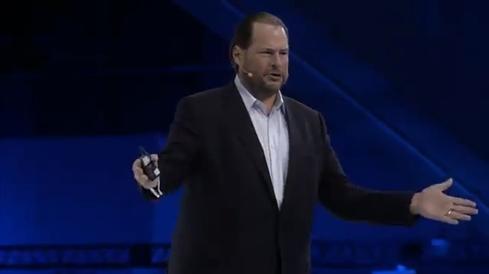 Reasons to like Salesforce1
It's refreshing that Salesforce1 is shipping today in the form of the new mobile app and admin apps available in the Apple and Android app stores. All those new APIs are also accessible to developers today, providing granular access to Salesforce services. In recent years there has been a gap of a year or more between Dreamforce announcements and product availability.

State-of-the art, consumer-grade smartphone and tablet capabilities are rare in the enterprise applications arena, so Salesforce should be lauded for "hitting the reset button," as Benioff put it, after it was clear Salesforce Touch was a failure. It took more than a year to rewrite the Salesforce API layer, and continuous API improvement will be an ongoing task.

The Salesforce1 platform and all those APIs aren't just for mobile apps. They'll also provide links for desktop, laptops, and connected devices.GE jet engines, GE locomotives, and even Philips Sonicare toothbrushes were mentioned by Benioff as "Internet of Customers" opportunities.

Salesforce.com operates very differently than most other companies I cover. It keeps most of the leaders it picks up from acquired companies, for example, and these leaders remain in charge of their business units. The leaders of IBM's acquired companies tend to split, and Oracle and SAP have mixed records on this front at best.

Benioff is also more immersed in scoping out and personally using state-of-the-art technology than any CEO I've encountered. Sit in on a Q&A and it's quickly obvious that he's a student of technology leadership and innovation. He's constantly trying to bring the best ideas into Salesforce.com -- not as an add-on but as part of the DNA of the company.

As this article points out, it's hard to create connective tissue between very different technologies -- like Force.com and Heroku, for example -- but Salesforce1 is an attempt to unify that's just getting underway.
Reply  |  Post Message  |  Messages List  |  Start a Board

It's interesting to see Salesforce.com, the great cloud disruptor, deal with the same legacy software problems we've always seen. Cloud and mobile don't make the complexity go away. But credit to Salesforce for pushing this agenda and making a mobile platform such a high priority. It's fighting the right battles.
Reply  |  Post Message  |  Messages List  |  Start a Board
InformationWeek Is Getting an Upgrade!