The set of hardware modules, software, and cloud services aims to provide developers with a faster path to market for apps that support the Internet of Things.

Meet Your IT Workers Of The Future
(Click image for larger view and slideshow.)

The Internet of Things (IoT) tends to be discussed as a line of consumer products and marketed toward individuals interested in a high-tech lifestyle. But Young Sohn, president and chief strategy officer of Samsung Electronics, emphasized it as a trend that benefits businesses during his keynote presentation at IoT World in San Francisco on Tuesday.

The company introduced three hardware modules that device-makers can use to create Internet of Things (IoT) products: ARTIK 1, a tiny module with a 9-axis motion sensor for low-end mobile devices such as beacons, activity bands, and fitness trackers; ARTIK 5, a slightly larger module for smarthome hubs, high-end smartwatches, drones, and IP cameras; and ARTIK 10, a module for devices that require high-performance processing such as home servers, smartphones, and media hubs.

The ARTIK family of devices is supported by a software stack that obviates the need to write low-level drivers for devices. 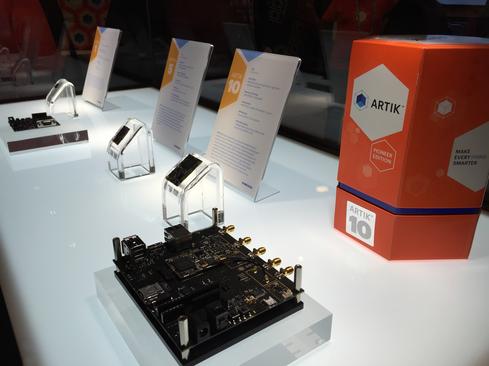 "Smart things will make our lives better," said Sohn. His message echoed that of Samsung Electronics CEO BK Yoon at CES in January. Yoon said that IoT has the potential to transform societies and economies through openness and connectivity.

Citing the way IoT devices can help with healthcare management, Sohn suggested people could benefit from a dashboard that would let them monitor their health as if they were watching the oil level in a car.

"This is where we need to go," Sohn said, noting that IT will have a growing opportunity to contribute to this goal.

Sohn also acknowledged a variety of challenges that will inform how connected technology gets deployed, such as shifting demographics, urbanization, and climate change. And he stressed that IoT devices must be secure.

"At Samsung, we believe every possible device should deliver the best possible security and privacy," Sohn said.

The service is free for developers at this time and is intended for data aggregation and analysis, but not data storage.

Thomas Claburn has been writing about business and technology since 1996, for publications such as New Architect, PC Computing, InformationWeek, Salon, Wired, and Ziff Davis Smart Business. Before that, he worked in film and television, having earned a not particularly useful ... View Full Bio
We welcome your comments on this topic on our social media channels, or [contact us directly] with questions about the site.
Comment  |
Email This  |
Print  |
RSS
More Insights
Webcasts
The Experts Guide to Ransomware Response
Multi-Cloud Data Management for Modern Applications
More Webcasts
White Papers
Protection Strategies for a Cyber-Resilient Organization
Global software company contracts with CBTS for Virtual CISO
More White Papers
Reports
The State of CCPA 2021
Gartner Market Guide for Insider Risk Management Solutions
More Reports

Samsung's Young Sohn is right, the Internet of Things is about a whole lot more than networked thermostats talking to personal fitness wristbands or the bathroom scales upstairs. He offers a genuflection to business uses but he still conceives of it as primarily a consumer Internet of Things. We've yet to really explore how quickly business will prompt the Internet of Things to start listening to business goals and serving new business models.
Reply  |  Post Message  |  Messages List  |  Start a Board
InformationWeek Is Getting an Upgrade!