SAP accelerates its transition to cloud services, raising subscription revenue forecasts and rolling back profit expectations as it invests in cloud growth.

The shift was clear Tuesday as soon-to-be sole CEO Bill McDermott said the company would "make the courageous move to transition the company to the cloud."

Where competitors such as Salesforce.com, Workday, and NetSuite are pure-play cloud vendors, SAP made clear its cloud will combine software-as-a-service offerings like SuccessFactors and Ariba with private-cloud delivery of the SAP Business Suite -- the so-called "core" company applications.

Reaching this goal will come at a cost. Acknowledging that cloud investment will affect the bottom line, McDermott moved back SAP's forecast of reaching a 35% profit margin by 2015. Instead that goal will be reached in 2017.

"We're moving the 35% target down the road two years so we get the market share we deserve," McDermott said.

Of course pure-play cloud vendors will stand in SAP's way, but co-CEO Jim Hagemann-Snabe asserted SAP is outgrowing these competitors. "In line-of-business, HR, sales, procurement, and finance, we are growing faster than pure-play cloud players like Salesforce.com and NetSuite," Snabe said.

Reaching or exceeding €3 billion in cloud revenue by 2017 will be no small task and will undoubtedly require additional acquisitions. But McDermott said future cloud growth would be "primarily" organic while possible deals would be "tuck-in" acquisitions.

"We have been opportunistic where we see we can move the company forward with a solution that would be better bought than built," he said. 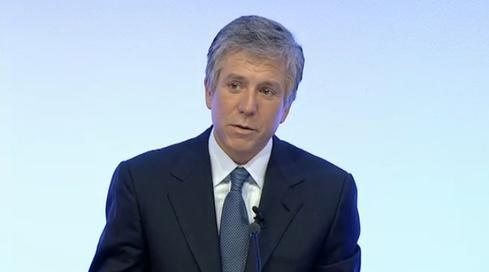 SAP's strong cloud growth over the past year was achieved for the most part through the acquisitions of SuccessFactors and Ariba for $7.7 billion. In 2013 SAP spent an estimated $1 billion to add Hybris, an e-commerce vendor that realizes at least part of its $150 million in annual revenue from the cloud.

With Tuesday's announcements, SAP seemed to push the Hana in-memory platform to the background by emphasizing that everything the company does will run on the technology. It will be the engine running everything SAP offers in the cloud and it will continue to be an alternative to traditional databases like Oracle, DB2, and Microsoft SQL Server for customers running the SAP Business Suite on-premises. But SAP is no longer offering separate growth projections for Hana because "as an integral part of SAP solutions it becomes more complicated to allocate a separate revenue number for Hana," said SAP spokesperson Jim Dever.

It's an artful move away from the Hana hype just as Microsoft and Oracle are gearing up to introduce in-memory options for their flagship databases in 2014. McDermott spun the change in emphasis as a mark of success: "Hana is now a serious brand that we're not having to push as hard as we used to."

So get set for McDermott's simplified SAP. Of course it will be mobile first, he promised, and it will offer "beautiful" new Fiori user interfaces. We'll also be reminded that Hana is there running behind the scenes and available as an option for on-premises deployments. But the big emphasis for the next four years will be everything cloud.

We welcome your comments on this topic on our social media channels, or [contact us directly] with questions about the site.
Comment  |
Email This  |
Print  |
RSS
More Insights
Webcasts
Keys to Better Cyber Risk Assessment
SASE: The Right Framework for Today's Distributed Enterprises
More Webcasts
White Papers
How to Avoid the Challenges of Cross-Platform Data Access Governance
Data-Driven Vulnerability Remediation with Vulcan Cyber - A Case Study With Snowflake
More White Papers
Reports
We Need Your Input: Trends in Workforce Optimization
Protection Strategies for a Cyber-Resilient Organization
More Reports

I interviewed Oracle co-president Mark Hurd on Thursday, and he had a similar message about the cloud: We're all-in. It's absolutely the future of Oracle applications. No hedging. I'll be writing about that interview with Hurd later in the week.
Reply  |  Post Message  |  Messages List  |  Start a Board

There's a new guy in charge at SAP, but you might recognize him as Bill McDermott. Tuesday's conference call seemed like a send-off for co-CEO Jim Hagemann-Snabe as McDermott congratulated him on 20 years of service and gave him a big hug. JHS won't be joining the company's Supervisory Board until May, but McDermott's well wishes seemed like a goodbye. Snabe will still be co-CEO, technically, during the next quarterly conference call in April, but company sources couldn't say whether he will be on that call.

Then there's the matter of McDermott himself. Is it me, or did he look different? Was it the hair? It's usually perfect, but it looked a little tousled on today's call. Maybe it's the weight of responsiblity now that he's soon to be the sole CEO.
Reply  |  Post Message  |  Messages List  |  Start a Board
InformationWeek Is Getting an Upgrade!

How to Submit a Column to InformationWeek InformationWeek Staff 4/9/2021
White Papers
CPRA: The Simple Guide
How to Avoid the Challenges of Cross-Platform Data Access Governance
Annual Cybercrime Report
Data-Driven Vulnerability Remediation with Vulcan Cyber - A Case Study With Snowflake
Identify Threats 82% Faster: The Value of Threat Intelligence with DomainTools