SAP executive board member Vishal Sikka unexpectedly resigns, signaling a shift in SAP strategy. What does it mean for Hana platform?

In a surprise move, SAP announced Sunday that Executive Board Member Vishal Sikka has stepped down and will leave the company effective immediately.

Sikka, the company's top technology leader, was the leading advocate of SAP's Hana in-memory platform. He was also the protégé of SAP Supervisory Board Chairman Hasso Plattner, Hana's earliest proponent and inventor. Sikka's departure marks a shift in what has been an ongoing debate within SAP over the company's future strategic direction, according to analyst R "Ray" Wang, founder of Constellation Research.

"Vishal and Hasso's favored approach was to build versus buy and develop great platforms that would lead to great apps -- innovate over execute," said Wang in an email interview with InformationWeek. "Other board members felt it was more appropriate to acquire versus build, focusing on apps over platform and execution over innovation."

The management shake up comes as Bill McDermott is expected to be voted in as sole CEO by May 21. That's also when current co-CEO Jim Hagemann Snabe will step down to join SAP's Supervisory Board. Several sources close to the company said Sikka had been angling to become co-CEO upon Snabe's departure.

"Vishal was also fighting to take the Hana platform into open source," said one source.

SAP underscored the importance of the Hana platform in a statement, citing strong adoption stats and insisting that the in-memory platform's roadmap "is in full effect." Meanwhile, the company announced the appointment of two new Executive Board members: Robert Enslin, president global customer operations, and Bernd Leukert, head of application innovation. 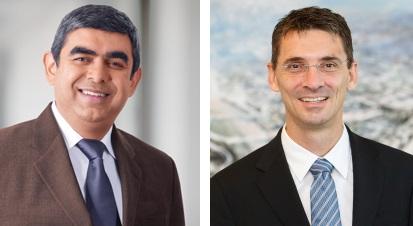 Given that Leukert's depth is in applications and that he is now the highest-ranking technology executive, it's another sign that SAP will focus more heavily on apps and cloud delivery rather than platforms, where IBM, Microsoft, and Oracle dominate the market.

"Leukert has been doing everything other than the platform," said Wang at Constellation Research. "He's a seasoned SAP executive who knows apps, and he's not somebody Vishal groomed as a successor."

With the likes of NetSuite, Salesforce.com, and Workday growing quickly while on-premises application sales have flattned, pressure is growing on SAP and rival Oracle to show results in the cloud. And where cloud computing is concerned, platform decisions are often invisible to the customer.

SAP also announced two appointments to its Global Management Board, a body created in 2012 to provide advisory and decision-support functions for the Executive Board. The two new board members are Helen Arnold, an 18-year company veteran who will become chief information officer, and Stefan Ries, a company HR veteran from 2002 to 2010 who will return to the company to lead global human resources.

Doug Henschen is Executive Editor of InformationWeek, where he covers the intersection of enterprise applications with information management, business intelligence, big data and analytics. He previously served as editor in chief of Intelligent Enterprise, editor in chief of ... View Full Bio
We welcome your comments on this topic on our social media channels, or [contact us directly] with questions about the site.
Comment  |
Email This  |
Print  |
RSS
More Insights
Webcasts
Optimizing App Performance in the Cloud
Nip Ransomware in the FUD: Detecting Attacks Pre-Encryption
More Webcasts
White Papers
Why Add Security to Your Skill Set and How to Do It
2021 SANS Cyber Threat Intelligence Survey
More White Papers
Reports
The State of Threat Detection and Response
Assessing Cybersecurity Risk in Todays Enterprises
More Reports

That may be a great idea for a spinoff business, but SAP is all about apps and needs to focus on the move into the cloud. Oracle president Mark Hurd called this one right recently at the InformationWeek Conference: "If I was the other company [meaning SAP], I'd be very focused on getting my applications to the cloud." The cloud battle, he said, is not about the underlying platform.
After four years, Hana has established plenty of mindshare, but the marketshare is barely a dent in the market shares of IBM, Microsoft and Oracle, who dominate the database business. If you want to be a disruptive startup or open source company, better to focus on just that business. SAP has bigger fish to fry.
Reply  |  Post Message  |  Messages List  |  Start a Board