SAP is hoping to give football fans some idea of what its technology is all about through the SAP Stats Zone, an interactive exhibition set to appear at the corner of 42nd Street and Broadway from Jan. 29 through Super Bowl Sunday.

SAP is one of eight NFL sponsors bringing interactive exhibits to Super Bowl Boulevard, a 13-block stretch of Broadway from 34th Street to 47th Street that will be temporarily closed off to vehicles and filled with football-related exhibits. The NFL is hosting a league apparel shop at Macy's Herald Square, an autograph and concert stage at 39th Street, and a field-goal kicking challenge on Times Square, among other exhibits. SAP's Stats Zone will be joined by sponsor exhibits from Papa John's Pizza, Bridgestone tires, Pepsi, Snickers, GMC, McDonald's, and Microsoft's Xbox One.

SAP's Stats Zone will have to stand out amid the glitz of Times Square, which presents quite a challenge, according to Ben Riches, an executive with GMR Marketing, the firm that helped SAP design and build its 40-foot-by-45-foot display.

"Our strength is that we have real data from social analytics, and it will help fans become smarter about the Super Bowl," Riches said.

The exhibit is powered by SAP analytics software, NetBase sentiment analysis, and the Hana in-memory platform, but the focus will be on football, not the technology. The exterior of the display includes giant LED scoreboards that will scroll through stats on 20 different topics related to the Super Bowl. Head-to-head comparisons will show fan passion -- as expressed across social networks and the Internet -- for the Denver Broncos and Seattle Seahawks.

A season-long analysis shows positive and negative sentiment for each team tracked throughout the 20 weeks leading up to the Super Bowl. Passion for Denver, for example, hit a season high when it came back against Kansas City in week 13 (see image below).

Another display shows which teams the majority of fans are rooting for state by state across the country. It's pretty obvious which way Colorado and Washington are leaning, but fans will see trending sentiment from Hawaii to Maine and in the Super Bowl host states of New York and New Jersey. 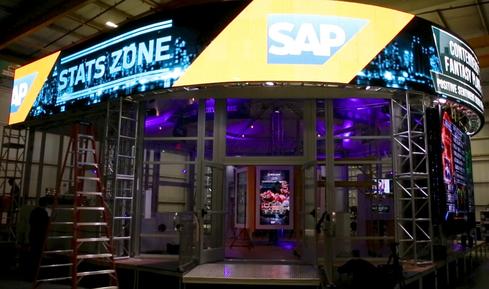 SAP Stats Zone under construction in a warehouse in Bethpage, NY.

Tracking the hottest topics throughout Super Bowl week, a word tag cloud display will show the biggest buzzwords cropping up in the social sphere. For example, early analyses show that 65% of fans are hoping it will snow during the game. The latest sentiment scores will appear when the Stat Zone goes live on the 29th, but they're also accessible at SAP.com/superbowl for those not visiting Times Square in person.

Displays inside the Stats Zone will include an interactive NFL Archive Quiz game that will promote the NFL Game Rewind feature on NFL.com. A Super Bowl Character Creator display lets kids (and adults) create their own player stats, digitally placing their face inside a helmet, and share the resulting image via email.

Playing off of SAP's sponsorship of fantasy football on NFL.com/fantasy, the Stats Zone will also feature head-to-head player matchups statistically analyzing various aspects of player performance. There was no word on whether Seattle Seahawk Richard Sherman -- he of the controversial post-game interview -- will be one of the featured players. 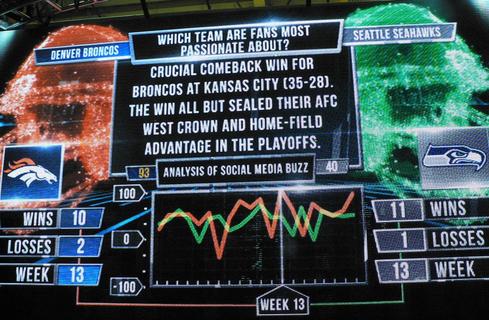 If you ask average tourists on Times Square what they know about SAP's ERP, CRM, or HCM applications, you're likely to get blank stares. SAP is hoping the Stats Zone, like the NBA.com/stats site it developed with the NBA, will make the company's technology more accessible.

"Over the last two years, SAP's sports sponsorships have changed focus," explained Dan Fleetwood, group director of global sponsorships at SAP. "We're trying to talk to the fans and humanize the brand instead of talking in 1s and 0s."

Interop Las Vegas, March 31 - April 4, 2014, brings together thousands of technology professionals to discover the most current and cutting-edge technology innovations and strategies to drive their organizations' success, including BYOD security, the latest cloud and virtualization technologies, SDN, the Internet of things, Apple in the enterprise, and more. Attend educational sessions in eight tracks, hear inspirational and industry-centric keynotes, and visit an Expo Floor that brings over 350 top vendors together. Register for Interop Las Vegas with Discount Code MPIWK for $200 off Total Access and Conference Passes.

IBM has been marketing to the "consumer" community for a long time. I think SAP is following in the footseps of IBM, which has been all over tennis, golf, and, until last year, football. They're after business leaders and wanna-be business leaders, not the beer-swilling types who paint themselves green and hold up signs and foam fingers.
Reply  |  Post Message  |  Messages List  |  Start a Board

North Carolina's the most talked about team in Iowa?

I think pro sports leagues are going to have to do more of this kind of data sharing, and providing interactive and visualization tools that get people talking about the game. For one thing, fantasy leagues thrive on stats. You're going to need to back up your trash talking with data visualizations.
Reply  |  Post Message  |  Messages List  |  Start a Board

I'm hoping we'll see more and better visualizations starting January 29, but if you go to the link for NFL Fan Visualization http://global.sap.com/campaigns/superbowl-2014/index.html#section_1 and scroll down a tad to "get started," you'll see some of the interesting analyses. For example, state-by-state fan support seems to fall roughly along red-state for Broncos, blue-state for Seahawks lines, but move the slider to go back in time.

Another #fail, though: you have to "wait patiently" for "Real-time" results. Hope that's NetBase lag time and not an example of Hana "real-time" performance!
Reply  |  Post Message  |  Messages List  |  Start a Board

I guess that's the problem of providing such negative stats while also being a Super Bowl sponsor: You don't want to rock the boat too much.
Reply  |  Post Message  |  Messages List  |  Start a Board

I decided to take a look, Rob. While the main site page is attractive, I wasn't able to find that information, unfortunately.

You get dumped off to a yawner of a blog post: http://scn.sap.com/community/business-trends/blog/2014/01/18/welcome-to-the-smarter-side-of-super-bowl-xlviii

If sentiment for the Denver Broncos hit a season high when it came back against the Kansas City Chiefs in week 13, then sentiment for the Seattle Seahawks must have hit a season low after Richard Sherman's trash talk following the NFC Championship Game. I wonder if SAP tracked that negative sentiment and is making it public.
Reply  |  Post Message  |  Messages List  |  Start a Board

I talked with SAP CEO Bill McDermott about that point a few months ago -- why SAP wants/needs to become a consumer brand. It has a lot to do with the younger, hipper, technically astute employee SAP wants to attract to the company. SAP's reputation is as a first-class developer of critical but "boring" B2B apps (my words, not his). SAP wants to be seen as playing in hotter verticals, including professional sports.
Reply  |  Post Message  |  Messages List  |  Start a Board

Is this mostly an investor relations strategy, to make the company look more pervasive and important?
Reply  |  Post Message  |  Messages List  |  Start a Board
InformationWeek Is Getting an Upgrade!