SAP CEO Bill McDermott promises to help customers simplify their technology landscapes using SAP Hana Enterprise Cloud. But is this the kind of cloud that most companies seek?

SAP CEO Bill McDermott kicked off the company's annual Sapphire Conference in Orlando, Fla., on Tuesday promising to help customers simplify their technology landscapes. It was a brave, and some would say incongruous, promise coming from a company known for its complicated enterprise applications.

The irony wasn't lost on McDermott, who acknowledged that SAP's technology has been "too complex." The SAP way to "run simple," as this year's Sapphire theme extols, is to move to the SAP Hana Enterprise Cloud.

SAP's cloud simplifies in two ways, McDermott reasoned. First, you won't have to deal with hardware and systems-management issues. Second, you gain performance and simplification advantages because, as the name suggests, this cloud runs on the Hana in-memory platform, which compresses data and eliminates separate transactional and analytical infrastructure layers. SAP itself runs on this cloud, and it collapsed its data footprint from 11 terabytes down to 2 terabytes, according to McDermott.

The question is, is this the kind of cloud that most companies are looking for, and are the simplifications and performance gains promised by Hana enough to lure customers?

Introduced last year, the SAP Hana Enterprise Cloud is actually a managed services environment. In other words, it's hosting of SAP's existing software, not a public cloud that delivers multitenant application services, a la NetSuite, Salesforce.com, or Workday. Hosting has been available for years, but the incentive to do it in SAP's cloud is to gain the turbocharging and simplification of Hana.

One bit of new news at Sapphire 2014 is the introduction of SAP Simple Finance, an evolved subset of SAP financial capabilities optimized to run on Hana. It's available on premises, but it's now an added incentive for customers to move to the SAP Hana Enterprise Cloud. 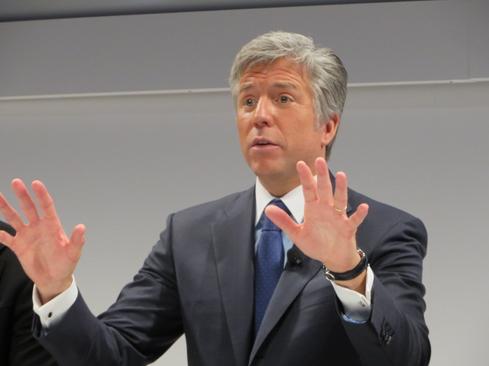 Simple Finance doesn't displace the existing Business Suite finance apps, but it's said to simplify and modernize key workflows, introduce new interfaces, and strip out antiquated code. If you already have SAP's finance apps, you can move to Simple Finance at no extra charge -- for the app. If you're not using Hana, you'll have to license or subscribe to the platform.

Another bit of news at Sapphire was the announcement that Fiori, SAP's consumer-style, mobile-ready applications and interfaces, is now available at no extra charge. SAP introduced Fiori last year as an extra-cost option, but that didn't fly. The change in policy comes after an outcry from customers who complained that those paying steep maintenance fees should be entitled to modern interfaces.

It turn out Fiori apps and interfaces aren't that easy to install, so SAP's original Fiori strategy was shortsighted, according to enterprise software consultant Frank Scavo of Strativa. SAP stands to make more money by giving these apps and interfaces away and recovering the cost through consulting and implementation service fees.

As for Simple Finance, think of it as an added incentive to move to SAP's Hana-powered cloud. And it's just the first of many optimized feature sets to come. SAP execs revealed that the company's entire Business Suite will be "Simplified" by the end of this year.

The questions for would-be customers of these Simple offerings will be many. Will you lose (and possibly have to recreate) any functions or customizations available in your legacy application? [Author's note: SAP is insisting, Day 2 here at Sapphire, that customizations will carry forward on the new Simple apps.] How much time and effort will be

Charlie, SAP's Hana Enterprise Cloud platform is a managed-service, hosting environment on Hana. It's private cloud, so it's possible to carry forward your customizations. Where SaaS vendors get their economies of scale from providing a single service that users can configure, SAP says its economies are gained through Hana, which offers columnar compression and the elimination of separate infrastructure for transaction processing and analytical processing. That's the story and they're sticking to it. The example shared in the story is SAP's own deployment, and the claim that an 11-terabyte system previously required to run SAP's own ERP footprint became a 2-terabyte footprint with Hana. If true, that's a pretty significant gain in efficiency.
Reply  |  Post Message  |  Messages List  |  Start a Board

Excellent questions, Charlie. Let's get some clarity on that.
Reply  |  Post Message  |  Messages List  |  Start a Board

If you can carry all your customizations into the SAP Hana Enterprise Cloud, that sounds like managed hosting to me. You get your own copy of the application running remotely, and your customizations somehow will appear in it, probably through a remote scan and upload. That's not software as a Service, and SaaS was the only term in the cloud lexicon that was a candidate to be used with this offering. There's nothing wrong with your own remote copy of Hana Enterprise Cloud. You just won't realize the efficiencies and savings of a multi-tenant SaaS architecture. Among other things, your copy has to run all the time; you won't be able to start and stop it at will. Or possibly I misunderstood something. Would SAP like to dispute that?
Reply  |  Post Message  |  Messages List  |  Start a Board

Exactly, Doug! It's very easy to say a company's products are going to be simple, not quite that easy to make it real especially when those products have a reputation for being the polar opposite. While McDermott got points for publicly recognizing the widely known point that SAP's producs have been complex, he'd better have some compelling user stories to share 12 months from now.
Reply  |  Post Message  |  Messages List  |  Start a Board

I spoke to a Uniliver exec -- a global SAP user -- and he said of McDermott's "simple" message, "that's brave coming from SAP... I'm going to use that in my discussions with SAP CRM execs." Uniliver has taken several years to consolidate more than a dozen ERP systems into four regional deployments. A project to implement new mobile sales apps, aided by Infosys, has taken 2 years. Make no mistake: SAP's technology is complex. That won't change quickly.
Reply  |  Post Message  |  Messages List  |  Start a Board

I was also at the show, standing among some users and partners, who voiced enthusiasm for McDermott's message. While several said it's premature to know how well the message will translate into reality, they admired his honesty and the refreshing tone of his presentation. His announcement that Fiori will now be free was greeted with applause, even in a viewing area removed from the central stage.
Reply  |  Post Message  |  Messages List  |  Start a Board
InformationWeek Is Getting an Upgrade!