The biggest Microsoft news of this week came from its annual Build conference, which was held this week in San Francisco. A series of lengthy keynotes updated developers on new features and changes to Windows 10, Power BI, Azure, Office, Skype, and other Microsoft products and services.

There were a couple of noteworthy updates before Build 2016 kicked off March 30. We learned that Office 365 is gaining enterprise users along with messaging service Slack, and that Microsoft's massive Surface Hub communication tool started shipping March 29.

At this year's Strata + Hadoop World, Microsoft announced new services to make analytics and big data processing more accessible to data scientists. These include preview versions of R Server for HDInsight and Spark for HDInsight, the general availability of Azure Data Catalog, and the ability to deploy popular big data apps with HDInsight without any code or scripting.

The first Build keynote started with Windows 10. Terry Myerson, EVP of Microsoft's Windows and Devices Group, informed us that Windows 10 has had 270 million active users in eight months, and announced that a Windows 10 Anniversary Update will arrive this summer.

If Microsoft sticks to the original launch date, we can expect the update to be released on or around July 29, 2016. When it is, it will have new inking capabilities across apps, a more deeply integrated and helpful Cortana, and the option to use biometric authentication for logging in to apps and websites in Microsoft Edge.

In an effort to replace traditional pen and paper, Microsoft is adding Windows Ink, a digital hub for access to inking tools and to recently used apps that prioritize the pen. Cortana will also recognize handwritten words like "tomorrow" on sticky notes and prompt users to create appointments.

The company also announced that the bash shell from Canonical's Ubuntu will run as a native interface on Windows 10. The two companies created the Windows Subsystem for Linux, which incorporates all the Ubuntu user-mode code into Windows 10. It's a big deal for developers, who will not have to recompile code to run on Ubuntu-on-Windows.

March 30 marked the shipping date for HoloLens, which will soon start arriving for developers and enterprise partners. Build attendees saw how the augmented reality headset will be used to teach medical students, as well as a demo of Galaxy Explorer, the winning project of Microsoft's "Share Your Idea" competition.

The idea of "conversation as a platform" was a key theme of the first day's keynotes. CEO Satya Nadella emphasized the importance of teaching computers conversational understanding and personal preferences, so they can be more helpful in everyday life. 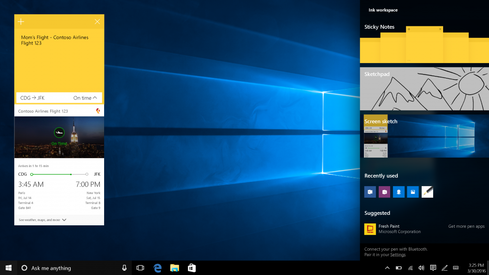 Microsoft will continue working on Cortana, which will be available from the PC lock screen. It will be able to respond to commands like "send Chuck the PowerPoint I worked on last night." The company is also integrating intelligent bots into Skype chats, so users can do things like plan trips and book calendar appointments from Skype. Developers now have access to Bot Connector and Bot Builder so they can connect existing bots and create new ones.

On day two of Build 2016, Microsoft announced that it's integrating Xamarin into all versions of Visual Studio: Enterprise, Professional, and Community. Ten days prior to the March 31 announcement, Redmond officially closed its acquisition of the mobile development company.

Developers can use Xamarin in Visual Studio to create and test iOS, Android, and Windows apps in Visual Studio using C#. The Xamarin Test Cloud can be used to test code across several devices simultaneously, save test videos, and drill down into specific problems.

There were also several Office updates for the developer crowd. Microsoft is broadening the capabilities of the Microsoft Graph, improving the responsiveness of apps that use Office data by providing notifications via Graph, and bringing add-ins to Office for Mac.

On the data front, we learned about the public preview of a new Azure service called Power BI Embedded, which enables developers to leverage Power BI to bring interactive data visualizations into their apps.

Kelly Sheridan is the Staff Editor at Dark Reading, where she focuses on cybersecurity news and analysis. She is a business technology journalist who previously reported for InformationWeek, where she covered Microsoft, and Insurance & Technology, where she covered financial ... View Full Bio
We welcome your comments on this topic on our social media channels, or [contact us directly] with questions about the site.
Comment  |
Email This  |
Print  |
RSS
More Insights
Webcasts
People Are The Most Important Part of Autonomous SOC
Nip Ransomware in the FUD: Detecting Attacks Pre-Encryption
More Webcasts
White Papers
Osterman Research: Cyber Crisis Response - Fit For Today's Threat Landscape?
Definitive Guide to Endpoint Privilege Management
More White Papers
Reports
Key Strategies for Managing New Risks in Cybersecurity
How Data Breaches Affect the Enterprise (2020)
More Reports