Workday reports an 82% increase in subscription revenues for HR and financials applications as it takes big customers live on its cloud-based apps.

Workday still qualifies as a comparatively small startup company, but it's slugging with big boys SAP and Oracle. On Monday, Workday reported double-digit gains in revenues in its third fiscal quarter as high-profile customers, including Thomson Reuters, Sanofi, Diageo, and Morgan Stanley, went live on its cloud-based applications.

Workday's revenue for the three-month period ended October 31 was $127.9 million, up 76% from the prior-year period and more than $10 million ahead of financial analyst expectations. Subtracting services revenues, subscription income was up 82% from the prior-year quarter to $93.9 million. The company projected fourth-quarter revenue of $133 to $138 million, ahead of the $128.9 million figure Wall Street was expecting.

Workday is pouring money raised in its $685 million 2012 IPO into product development and hiring sales and support staff, so it is far from profitable. Nonetheless, the non-GAAP loss of 12 cents a share was better than the 17-cents-per-share-loss that Wall Street expected.

Two-thirds of Workday's 550 customers are now live on its cloud apps, reported company co-founder and co-CEO Aneel Bhusri. The vast majority of those customers use the company's mature human resources applications, but Bhusri reported progress on the company's cloud-based financial-management suite, which it has been developing over the last three years. Workday added 10 financials customers in the third quarter and now has 25 customers overall.

"We're ramping up our financials functionality quickly and we have another wave of bigger companies coming online," Bhusri said.

As the financials product matures, Bhusri said Workday will move into the Fortune 1000 market, where the company is winning sales with its HR suite. The cloud-based HR suite is most often deployed as a replacement for legacy Oracle PeopleSoft and SAP systems, Bhusri reported. 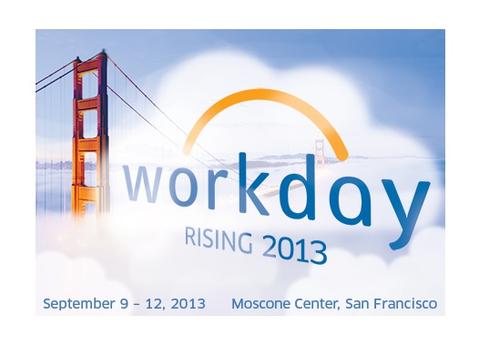 Workday is counting on a new revenue stream from a recruiting application set for launch in the spring of 2014. The application complements the HR suite and answers cloud-based competition from Oracle Taleo and SAP SuccessFactors. The company is also developing a Workday Student app for the higher-education market that it plans to bring online starting next year.

In recent months Oracle and SAP seem to have intensified their focus on cloud growth, and they're more often citing instances of beating Workday in competitive deals. SAP reported a 79% increase in cloud subscription and support revenue to $520 million in its third quarter ended September 30. That's against a reported base of approximately 6,000 SaaS customers, putting the average quarterly revenue per customer at about $87,000.

By contrast, Workday can boast of having deeper relationships with a much smaller customer base. The company's average revenue-per-customer across 550 customers exceeded $230,000 in the third quarter, making it clear it's winning deep commitments to using mission-critical applications in the cloud.

We welcome your comments on this topic on our social media channels, or [contact us directly] with questions about the site.
Comment  |
Email This  |
Print  |
RSS
More Insights
Webcasts
Building the SOC of the Future: Next-Generation Security Operations
ROI and Beyond for the Cloud
More Webcasts
White Papers
How to Prioritize Risk Across the Cyberattack Surface
The 2020 Duo Security Trusted Access Report
More White Papers
Reports
The State of Threat Detection and Response
The Drive for Shift-Left Performance Testing
More Reports

Average revenue-per-customer calculations are not an exact science. For example, when Workday first started out, it gave discounts for paying three-year subscriptions in advance as a way to fund its growth. Now that the company has gone public it has plenty of cash and payments in advance are much closer to one year. That front loading obviously raises the per-customer avarage. Still, the gulf between Workday and other SaaS firms is pretty wide. Salesforce.com, for example had about $1 billion in revenue across around 100,000 customers, so that averages to around $10,000 per customer, per quarter -- clearly an indication of a less-substantial technology footprint and lots of small-company customers.
Reply  |  Post Message  |  Messages List  |  Start a Board

Any of you eyeing Workday for financials? What is propelling you forward -- or holding you back?
Reply  |  Post Message  |  Messages List  |  Start a Board

Workday's quarter is a sign that companies will take standard, everyday apps as SaaS, whenever they can get them. And they want their supplier to have grown up in the cloud, not backed up to it.
Reply  |  Post Message  |  Messages List  |  Start a Board
Editors' Choice
Hot Topics