8 MOOCs Transforming Education
(click image for larger view and for slideshow)
Steve Jobs was a member of the billionaire dropout club, the fraternity of technology entrepreneurs who never graduated from college but showed through the companies they created that there are other ways to learn.

With "Jobs", the Steve Jobs biopic opening Friday, the Degreed alternate credentialing service is calling attention to a series of "case studies" it has created on the lives of remarkable people, including Steve Jobs, Hillary Clinton, Mark Cuban, Clayton Christensen and Oprah Winfrey.

Degreed aims to be a site where lifelong learners can compile all their formal and informal educational credentials, from university degrees to Coursera or Khan Academy courses to books they've read. A university degree is still worth more than taking a MOOC, and some universities and degrees count for more under Degreed's point system, but everything counts. Once you've assembled a profile, you can publish it so everyone can see how smart you are and how you got that way.

[ There's a difference between educational resources that are open and those that are merely free. Read more at In Shadow Of MOOCs, Open Education Makes Progess. ]

Given Jobs' legendary confidence, it's hard to imagine he would have seen the point in signing up for this service had it been available to him as a young man, but in principle he is just the sort of person who could have benefited from a service that allowed him to pull together scattered credentials. In the 1970s, Jobs spent six months as a student at Reed College before dropping out (although he continued to audit classes that interested him for another year and a half). Unlike Bill Gates or Mark Zuckerberg, he didn't immediately go from dropout to CEO – he started as an electronics technician, squeezing in a trip to India (wouldn't you like to see a badge for mysticism and psychedelic drugs?) before going on to co-found Apple. 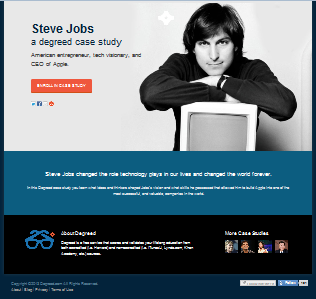 Degreed CEO David Blake said a common reaction once people understand the kind of educational biography they can build on the site is, "I wish I could see the education of some of these thought leaders." Maybe someday a world-changing leader's profile will be available on Degreed, but meanwhile, the case studies are a way to seed that, Blake said. He cited the recent "smart is sexy" speech by Ashton Kutcher, the actor who plays Jobs in the movie, as evidence that the time is ripe to make the connection with all the different ways you can get educated.

The fact that we typically sum up our education as equating to the last degree we earned is a shame, Blake says. "We skip decades of our lives. It's such a missed opportunity."

Degreed's thought leader case studies are collections of links to articles and videos, and once you check off that you've read or watched them, the system will give you points toward your total. To be clear, the point totals for such passive experiences are low.

"We don't want to overstate what it does mean," Blake said. "But suppose you've voraciously read The Economist for two years -- that's a valuable signal that doesn't exist in the marketplace right now."

The formula for weighing the different types of learning is still a work in progress, as is the automated system Degreed is developing to automatically import college transcripts. For a sense of proportion, Blake's own profile shows 3,366 points for his degree from Brigham Young University, 93 points from Udacity, 12 points from Coursera, and 10 points from Lynda.com. Overall, he has more than 4,000 points, reflecting credits for reading, conference attendance and other experiences.

"I think Steve Jobs and other voracious learners would be very interested in what we're doing," Blake said.