Teambox, as a task-oriented, cloud-based social collaboration tool, is a flexible option for collaborative learning and other campus projects.

Inside Eight Game-changing MOOCs
(click image for larger view and for slideshow)
The higher education market is emerging as one of the best success stories for the social collaboration and project coordination tool Teambox.

"We deliberately built a platform of collaborative tools that applies to any vertical, but we've gotten particular traction in a couple and education is one of them," said Teambox CEO Dan Schoenbaum. Founded in 2008 and headquartered in Barcelona, Spain, Teambox has established a U.S. headquarters in Redwood City, Calif., and is working to capitalize on the interest in social task management tools. Teambox provides social profiles and comment streams in a manner similar to Facebook-for-business products like Yammer, but it is organized around projects rather than discussion groups. Teambox can be used for file sharing but also integrates with cloud file sharing services like Dropbox and Box. As a result of a partnership announced in December, Teambox also bundles in 15 gigabytes of Box storage. Those integrations are available with a paid subscription. Teambox also provides free accounts for up to five users and five projects.

While there is nothing education-specific about the Teambox product, the nursing program at Western Wyoming Community College uses Teambox to support online learning, rather than its learning management system, Blackboard.

"We're using Teambox where others would use an LMS," said David Bodily, assistant professor of nursing and architect of the online program for nursing. That choice was driven partly by the non-traditional, flipped classroom structure of the nursing program, which clashed with an LMS approach "fundamentally designed for the sage on the stage," he said. Rather than fitting his instruction into a structure imposed by an online tool, he wanted something flexible enough for him to configure however he wanted, Bodily said. "An LMS is very much not that." The social collaboration features in LMS products have gotten stronger since he first looked at them, but he still doesn't see them as the equal of Teambox in that respect.

Most of Teambox's other customers in higher education are using it for behind-the-scenes applications. Penn State University's Agricultural Sciences program adopted Teambox to support a strategic planning project, and it has since been picked up for use by other departments.

Aaron Pompei, director of multimedia strategy and development at Savannah College of Art and Design, has been using Teambox to support the production process for video lectures to be included with online courses. The school's Virtual Lecture Hall program started in 2005, and as it has grown "we had a growing need for project management," he said.

In particular, he needed a very flexible tool for coordinating projects between faculty, staff, and the students who do most of the actual production work. "The thing is, we're never going to be in the same place at the same time, except when we're on production," Pompei said. The university's information technology department did have other project management tools available under enterprise licenses, but nothing that could easily be made available to students as well as university employees, he said.

Teambox was a good fit because it wasn't as complicated as many other project management tools, which tended to be "far too robust," but it was still more sophisticated than task management products designed primarily for individual users, Pompei said.

Pompei said he has also looked at Yammer, "but I haven't found a use for it." Meanwhile, Teambox provides some of the basic social networking functions -- such as the ability to @mention other users Twitter-style as a way of bringing them into a discussion -- that help it meet student expectations for how software ought to work, he said. Projects and discussions can also be categorized with social media-style tags so they are easier to track or find in a search.

Teambox went through an IT review before it was approved for use, and it is finding other uses at the college; for example, within a collaborative learning center and a careers and alumni relations team, Pompei said. 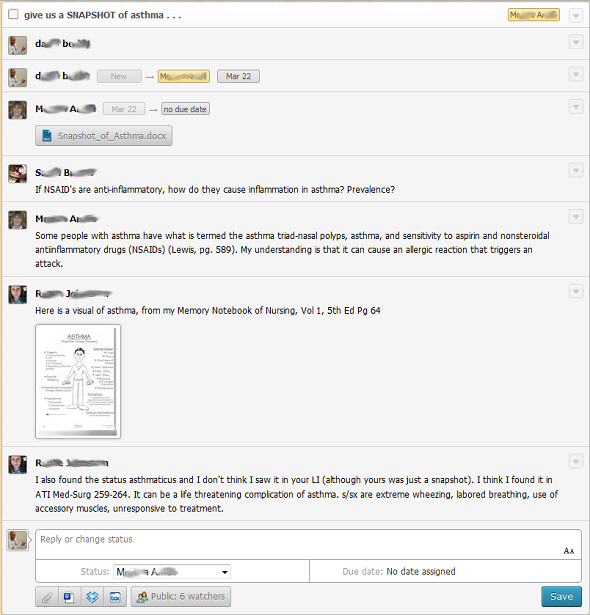 Nursing students at Western Wyoming Community College use Teambox to collaborate on coursework (student names obscured).
We welcome your comments on this topic on our social media channels, or [contact us directly] with questions about the site.