HTC has layered its own UI, called Sense, on top of the Google-backed Android in order to take advantage of gesture controls, widget support, and quick-launch icons.
Marin Perez
Contributor
June 24, 2009 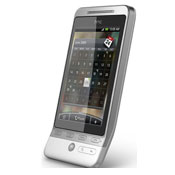 HTC is quickly becoming the leading manufacturer of Android devices, as it unveiled Wednesday its third smartphone with the Linux-based operating system.

The HTC Hero has a 3.2-inch capacitive touch screen, but it won't have the same Android user interface that comes with devices like the T-Mobile G1 or the upcoming myTouch 3G. HTC has layered its own UI, called Sense, on top of the Google-backed Android in order to add gesture controls, widget support, and quick-launch icons for things like e-mail, Facebook, Twitter, or other Web-based applications.

Part of HTC's success with its Touch line of smartphones is because of the unique TouchFlo 3D UI that's built on top of Windows Mobile. With a slew of Android phones expected to be released over the next few years, HTC said its UI could be an important differentiator.

The Hero also one-ups Apple's iPhone 3GS by giving users the ability to use Adobe's Flash technology while browsing the Web. HTC's smartphone is the first Android device that can use Flash, but the technology is expected to be widely available across the platform later this year.

"Adobe Flash is an important core technology for people interacting and experiencing the Web; it is only natural to be offering it on the new HTC Hero first," said John Wang, chief marketing officer for HTC, in a statement.

The Hero can use EDGE, 3G, or Wi-Fi to stay connected on the go, and the handset will have the "Chrome Lite" browser that comes with Android. The smartphone also has GPS, Bluetooth 2.0, a microSD slot to expand the memory, and a 5-megapixel camera that can record video.

The Hero will be available in European markets in July, and it's expected to hit North America later in 2009. HTC did not say what carriers it would come to, and it did not give an expected retail price.