Analytics and business intelligence consumers want easy-to-use products that make data access and data analysis a self-service proposition. This is a key finding of our just-released 2014 InformationWeek Analytics, Business Intelligence, and Information Management Survey. It's not surprising, because ease of use and self-service have been high on the wish list in our annual survey for the last four years. It's also no surprise to see vendors associated with ease of use gaining ground.

Which analytics and BI products are you using, planning to use, or evaluating?  We've put this question to survey respondents every year, so we can track changes over time. The biggest gainer in current or planned use compared to last year's results was Tableau Software while the biggest slides were seen by Actuate, IBM Cognos, and MicroStrategy.

As in past years, survey respondents were qualified as being involved in determining the need, recommending, specifying, or authorizing or approving the purchase of data analytics, business intelligence, or statistical analysis software. Among this year's crop of 248 qualified respondents, 13% say they're using and 6% say they're planning to use Tableau Software (see chart below), a vendor known for data-visualization software that has a reputation for being easy to use. That's a 5-point overall increase from our 2013 survey, in which 8% of 417 respondents said they were using and 4% said they were planning to use Tableau.

Keep in mind that this data is not a direct reflection of market share, as our research doesn't track software revenue or licenses (something that Gartner and IDC both measure). The two other gainers in this year's survey are Microsoft and SAP, which saw modest, 2-point increases in current and planned use. 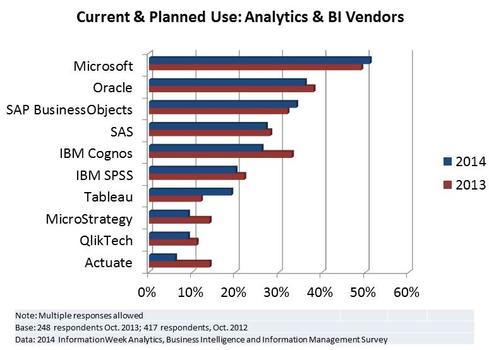 IBM last month promised self-service data access and analysis through Project NEO, which it describes as bringing data discovery to the masses. Currently in IBM's labs, NEO lets users drag and drop data sets from a library into an analysis. A built-in ontology engine automatically reconciles disparate data without requiring complicated data-mapping exercises. NEO also supports natural-language query, so users can ask questions in plain English, such as: "Show me the top sellers by region." NEO also promises a rich selection of suggested data visualizations from which users will be able to explore. It all sounds like just what users have been asking for, but it won't be released until mid 2014, according to IBM.

Software cost and ease of deployment play a role in how quickly companies can embrace new products (here's where Tableau's low-cost desktop software has an advantage), but the fastest-growing vendors and the biggest market share gainers in recent years -- Microsoft, QlikTech, Tableau, and Tibco Spotfire -- have been the companies that have focused on ease of use, self-service, and data visualization. The handwriting has been on the wall for at least four years, so it's kind of late in the game to be changing product reputations.

In other findings in our 2014 InformationWeek Analytics, Business Intelligence, and Information Management Survey, 59% say data quality problems are the biggest barrier to successful analytics or BI initiatives, 44% say "predicting customer behavior" is the biggest factor driving interest in big data analysis, and 58% list "accessing relevant, timely or reliable data" as their organization's biggest impediment to success regarding information management. For complete survey results, including 22 charts and detail on current and planned use of software from 14 leading vendors, download the free report (registration required).

Read carefully. Actuate was up five points from 2012 in the 2013 survey but then slid 8 points from the 2013 result to the 2014 survey. As stated, we don't view a 2-point swing as significant, but an 6-point+ swing is, indeed, statistically significant.

Given the numbers of responses, results toward the bottom of the top-ten list -- we listed 28 vendors in our survey and shared results for the top 14 -- are more sensitive than for the top-five vendors that have many more users.
Reply  |  Post Message  |  Messages List  |  Start a Board

The biggest gainer in current and planned use in our 2013 survey (the one published in late 2012) was Microsoft, up 6 points from the previous year's survey, while SAP BusinessObjects was the biggest loser, down 7 points. Tableau was up 1 point, Actuate was up 5 points, IBM Cognos was up 2 points and MicroStrategy was down 1 point from from the 2012 to 2013 survey.

Returning to the 2014 survey results, InformationBuilders and TibcoSpotfire are tied with Actuate for the #10 spot at 6% combined current or planned use, but that's rounding to whole percentages. Actuate had the highest number of repsponses among the three. That said, InformationBuilders had the highest number of respondents reporting "current" use (at 5%, versus 3% for both Tibco Spotfire and Actuate). Download the report for complete details. Links are above.
Reply  |  Post Message  |  Messages List  |  Start a Board
InformationWeek Is Getting an Upgrade!