5 Resolutions For Better BI in 2012 - InformationWeek

"Pervasive BI" has been a much talked-about goal for business intelligence vendors and practitioners alike for more than five years. The idea was that BI tools weren't being deployed and used widely enough to promote fact-based decision making. As I see it, it's time to give up the dream of pervasive BI and move on to a better goal.

The pervasive BI push was tied to research that showed that BI adoption rates were stuck at about 25% -- meaning that at companies using BI, on average only about a quarter of employees actually had access to the tools and interfaces. Some vendors, notably Microsoft, blamed rival's expensive and hard-to-use tools. Others blamed practitioners and their cultures; if only these firms would form BI centers of excellence and get the tools into the hands of more employees, users would naturally give up on reflexive, gut-feel decision making and rely instead on the numbers. From numbers-driven decisions, better outcomes would naturally flow.

Our just released InformationWeek "2012 BI and Information Management Trends Report" shows that the quest for pervasive BI remains elusive as ever. (You can download this report for free if you're a registered user of InformationWeek.com -- and if you're not yet registered, you can do so at no charge.) Likewise, Cindi Howson's recent Successful BI report shows adoption rates remain stuck at around 25%.

As I see it, low adoption rates are a symptom of the underlying problem that too many BI products are too complicated, expensive and separated from actual work to become a part of day-to-day decision making. In fact, I'm increasingly convinced that pervasive BI is a vendor licensing pipedream, and that BI and analytic tools and interfaces alone won't get us to better outcomes. Instead of worrying about adoption rates (just one possible measure of success), I propose five keep-it-simple resolutions to focus on BI software usability, manageability, and deployment approaches:

Make sure it's easy to use. Complexity has long been among the top complaints about BI software, and it's still right up there. When presented with 15 possible answers to the question "what are the barriers to adopting BI products enterprisewide?," 45% of respondents cite "ease-of-use challenges with complex software/less technically savvy employees." The choice is a close second to "data quality problems," an information management challenge cited by 46% of respondents.

Next year I'll strike the "less technically savvy employees" part of that response. If the iPhone, iPad and many smartphone and tablet apps have taught us anything, it's that very sophisticated software can also be made to be easy to use. Going forward, "poor user training" should not be an excuse for low software adoption rates or failed pilot projects. If prospective users can't begin to make sense of unfamiliar interfaces without training, let that be your first warning sign that the software is too complicated.

If you're already invested in a product that new users find hard to use, it's up to your developers to come up with simplified dashboards or interfaces that can deliver meaningful insights in an easily digestible way.

Make sure it's easy to deploy. Asked to cite the most important features to look for when purchasing a BI product or selecting a vendor, 63% select "ease of implementation" as the top choice among 13 possible answers. It's pretty amazing that a deployment characteristic outclassed usability criteria such as "fast data exploration, query and analysis capabilities." I'm guessing that more than a few of these respondents have been badly burned by BI deployments or upgrades gone wrong.

How can you ensure that a BI product is easy to deploy? Start by insisting on multiple references, and be sure to talk to the people who were involved in deployments of the product and version you're vetting. If you're an existing customer considering an upgrade, it's easy enough to check out what fellow customers are saying in user group forums. In fact, many online and social-network forums are operated by independent user groups, and you're even more likely to hear the unvarnished truth there.

Make sure it's affordable. The response "software licenses are too expensive" actually placed sixth on list of barriers to enterprisewide BI deployments, so cost isn't everything. But as shown in the chart below excerpted from the "2012 BI and Information Management Trends Report," our respondents cite Microsoft as the most widely used BI software supplier by far, tapped by 46% of respondents, planned for use by an additional 7%, and being evaluated by another 15%. That's no surprise given that Microsoft includes its BI software as part of other products, which tells me that affordability matters more than people might let on. 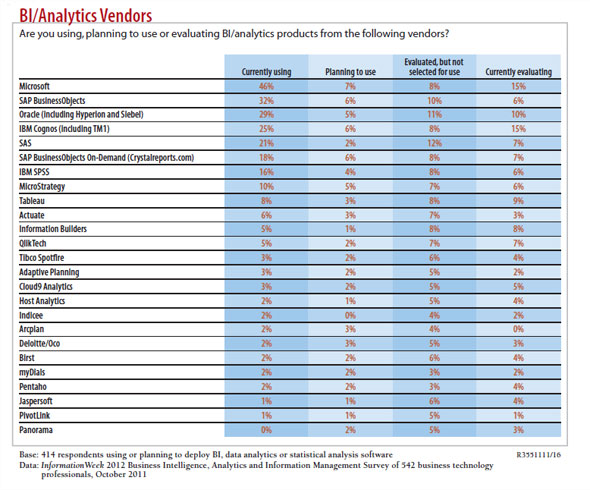 Hi Doug. Re: Affordability
You really should be pointing out the connection between affordability to TCO. All too often companies fail to look past license cost and consider TCO. As Gartner rightly point out, ongoing support and administration of BI counts for 75% of TCO, which is why Microsoft and some open-source BI vendors have considerably higher TCO than some others I won't mention...
Reply  |  Post Message  |  Messages List  |  Start a Board
Editors' Choice
Hot Topics