Artificial intelligence, robotics, and wearables are among the many tech innovations percolating in Fidelity Labs, the Boston-based tech incubator for Fidelity Investments.

Artificial intelligence, robotics, and wearables are not typically the first things that come to mind when considering the worldwide operations of a financial services firm like Fidelity Investments. Yet these are among the many tech innovations percolating in Fidelity Labs, the Boston-based incubator for Fidelity Investments.

Such labs may be commonplace in technology companies that live and die by their product innovations. And innovation labs might become more commonplace in the next five years as a wide range of industries attempt to keep ahead of technological change. So, perhaps what's most surprising about Fidelity Labs is not that it's new, but that it's been in operation since 1998.

Fidelity Labs employs 80 people worldwide in incubation spaces in the US, China, and Ireland. It was founded by the company's chairman, Edward C. "Ned" Johnson III, who was concerned that day-to-day technology operations were keeping the company from exploring new ideas, said Hadley Stern, VP of Fidelity Labs, in his presentation at the InformationWeek IT Leadership Summit on Tuesday. The IT Leadership Summit is one of several workshops being held this week during the Interop New York IT Conference and Expo.

[Make sure you know about this growing outsourcing region. Read 15 Surprising Facts About Indian Outsourcers.]

"We run proof of concepts, pilots, and incubators," said Stern. "Anything that's unclear, whether it will come into the customer base or to the enterprise, we're looking at it."

Fidelity Labs has strategic partnerships with MIT and the Design Thinking practice at Stanford University, according to Stern, who emphasized that Fidelity Labs' innovation efforts include ample opportunities for customers to evaluate its offerings and test out the labs' hypotheses.

To test out such a hypothesis, Fidelity Labs brings customers and non-customers alike to one of its incubation spaces. "They're not focus groups," Stern explained. "We're bringing in people for a structured dialogue and conversation around a particular hypothesis. We're using techniques of design thinking to uncover unmet needs." 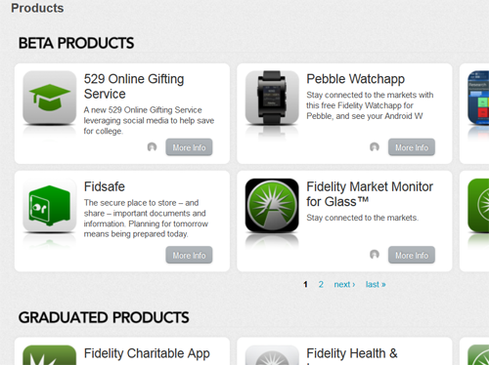 Depending on how the hypothesis holds up, the organization then creates a prototype for interested customers to test. For the document-storing hypothesis, Fidelity Labs spun up FidSafe, currently in incubation mode. The goal is to eventually launch FidSafe as a product offering, Stern said.

The ideas emerging from Fidelity Labs are not solely focused on meeting the needs of external customers. For instance, Stern said work is being done on using gamification to motivate Fidelity Investments' 6,000 phone reps worldwide. In addition, video is being evaluated as a tool for customer service reps to communicate with customers.

Internal collaboration is crucial to the work being done at Fidelity Labs, according to Stern, who notes that the group works closely with all areas of the business. "We don't do any of our work in a vacuum. We have a steering committee, and we communicate with them on what we're exploring and get input from them on what we should be exploring. We're very coordinated between our different tech groups. We are not able to do our stuff on our own; we involve a lot of other groups."

Each project has a customer co-development team composed of a visual designer, a developer, a product manager, a design thinker, and a business coach leader, said Stern. "They're the ones shaping developments that they're going to put in front of customers. They're co-located in an incubation space room together with partners, and that's where customers come in."

In addition, Fidelity Labs runs global seminars every six weeks on business and tech topics to help disseminate information about its work throughout the company. Internally, the organization uses lean startup methodologies and agile development practices to achieve its goals. "Innovation sounds sexy and interesting," said Stern. "But it's actually very painful once you have to go do stuff. Software is software, QA is QA. It's different because you're doing different things, but it's not that radically different."

Do you work at an organization that has an innovation lab? If so, what are the benefits and drawbacks of such an approach? Do you wish your company had such an operation? If so, what would be the first prototype you'd like to see? Tell us all about it in the comments section below.

Susan Nunziata leads the site's content team and contributors to guide topics, direct strategies, and pursue new ideas, all in the interest of sharing practicable insights with our community.Nunziata was most recently Director of Editorial for EnterpriseEfficiency.com, a UBM ... View Full Bio
We welcome your comments on this topic on our social media channels, or [contact us directly] with questions about the site.
Comment  |
Email This  |
Print  |
RSS
More Insights
Webcasts
Monitoring Critical Cloud Workloads
Disaster Recovery/Business Continuity in the New Normal
More Webcasts
White Papers
Must-Read Research: Why Sustainable 5G Networks are a 150-Year-Old Problem
Bandura Threat Intel Integrations Infographic
More White Papers
Reports
The State of Malware Threats
Cortex XDR Rides the Forrester Wave as a Leader
More Reports

@PedroGonzales if you're right, there may need to be a mindshift from "can't afford to" to "can't afford NOT to"
Reply  |  Post Message  |  Messages List  |  Start a Board

@PedroGonzales: What's most remarkable to me is how they're inviting in customer feedback at various stages as they work through some of their ideas. Going forward, eliciting this kind of customer involvement in the development of new products and services is going to play a huge role in the success or failure of companies in just about every industry sector I can think.
Reply  |  Post Message  |  Messages List  |  Start a Board

@jastroff: Many of the questions raised by attendees at this session did indeed run along the lines of "how do you do this," and "where does the funding come from." In this particular case, it's clear the chairman was behind the endeavor, and it seems that level of support is absolutely necessary in order for an innovation lab of this scope to exist in any organization.

Thanks for your experiences--what was your favorite part about working in the innovaiton lab?
Reply  |  Post Message  |  Messages List  |  Start a Board

@Jastroff: Those are the two key components of success for any kind of innovation lab endeavor: support from the highest ranks of the copmany, and a diversity of disciplines working together to share ideas. Sounds like an incredible experience. Though I'd also imagine with such a group of creatives there might have been some bit of herding cats involved. Was it challenging to get everyone focused and working on common goals?
Reply  |  Post Message  |  Messages List  |  Start a Board
InformationWeek Is Getting an Upgrade!