Microsoft has acquired Wand Labs with the intention of improving messaging apps and bots with enhanced natural language technology.

Microsoft has confirmed its acquisition of messaging app company Wand Labs. Financial terms of the transaction were not disclosed.

Wand Labs is focused on developing new technology for messaging apps. It was founded in 2013 with the goal of leveraging mobile scale, natural language, and third-party services so users could access and share authorized services and devices.

[Microsoft's mobile strategy is a flop. How will it face the future of smartphones?]

"The work we've been doing with predictive assistance and delegated authority is at the leading edge of a broader technology shift that is redefining the information industry," wrote Wand CEO Vishal Sharma in a June 16 blog post on the acquisition.

Wand's work on the future of messaging makes Wand a natural fit for Microsoft, which has been increasing its focus on improving communication, particularly for intelligent agents and cognitive services.

David Ku, corporate vice president of Microsoft's Information Platform Group, explained how the work being done at Wand Labs closely aligns with Microsoft's goals of building the future of communication technology. He wrote on the Microsoft blog:

Wand Labs' technology and talent will strengthen our position in the emerging era of conversational intelligence, where we bring together the power of human language with advanced machine intelligence -- connecting people to knowledge, information, services and other people in more relevant and natural ways.

The people and technology at Wand Labs will join Microsoft's Bing engineering and platform team as part of the acquisition. There, they will continue building on the messaging technology currently integrated into Microsoft services.

In addition, Wand Labs' service will shut down as part of the deal.

This purchase marks Redmond's latest effort to improve its conversation-as-a-platform strategy. While Microsoft highlights Bing as the focus of this particular acquisition, the technology at Wand Labs could also enhance services like Microsoft Azure, Office 365, and Windows. 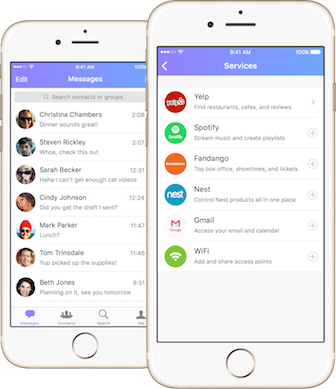 At this year's Build conference, CEO Satya Nadella explained Microsoft's efforts to develop new communication tech. He introduced the concept of "conversation as a platform," which will serve as the foundation of how people will interact with technology and one another. The future is not "man vs. machines," he said, but "man with machines."

"We want to take the power of human language and apply that more pervasively to all the computing interfaces and computing interactions," said Nadella. Microsoft's vision will require people to teach computers human language, conversational understanding, and their personal preferences so tech can play a bigger role in everyday life.

The future of conversation will involve three actors: People, personal digital assistants, and the bots that will serve as apps that converse with people and perform tasks.

It will be interesting to see how the acquisition of Wand Labs influences projects Microsoft is currently working on. The company announced a new Cortana app collection, for example, as part of its Windows 10 Anniversary Update slated to launch next month. Skype bots were recently launched for Mac and web use.

If the Wand team is joining Microsoft's Bing division, there's a chance it will work on the Bing Concierge Bot reportedly undergoing development. As indicated by a (now removed) job posting on Microsoft's website, the bot will communicate with users across a variety of chat platforms including Skype, SMS, Messenger, and WhatsApp to perform tasks for users.

Kelly Sheridan is the Staff Editor at Dark Reading, where she focuses on cybersecurity news and analysis. She is a business technology journalist who previously reported for InformationWeek, where she covered Microsoft, and Insurance & Technology, where she covered financial ... View Full Bio
We welcome your comments on this topic on our social media channels, or [contact us directly] with questions about the site.
Comment  |
Email This  |
Print  |
RSS
More Insights
Webcasts
Making Cybersecurity Work in Small and Medium-Sized Businesses
5 Steps to Solving Modern Scalability Problems
More Webcasts
White Papers
The Insecure State of Microsoft Teams Security
Research Report: Evaluating Your Organization's Cybersecurity Readiness
More White Papers
Reports
The Malware Threat Landscape
The Future of Multi-Cloud Networking 2020
More Reports