Despite licensing cost increases, early-mover customers give upgrade to Microsoft's flagship database the nod on affordability compared to Oracle and IBM offerings.

Talking to SQL Server 2012 early adopters, it's clear that cost considerations usually clinch the choice of the database, whether it's used in transactional or data warehousing deployments. And that's despite the fact that SQL Server 2012 will be more expensive than its predecessor when deployed on high-end servers because Microsoft has changed its licensing approach.

"We've added a lot of high-end data-center management capabilities, so we're moving to the standard industry practice of charging per core rather than per processor," said Eduardo Rossini, a Microsoft VP of SQL Server Marketing. Data center and cloud capacity is now widely measured per core, so it makes sense to charge that way, Rossini told InformationWeek.

Under the new licensing terms, customers using high-end servers with 8-core and 10-core processors will pay about twice as much to license SQL Server 2012 Enterprise Edition than they paid per processor for SQL Server 2008 R2 Enterprise Edition, according to an analysis by Directions on Microsoft (and republished by Microsoft Certified Professional Magazine). There's a cost break for many customers now using SQL Server 2008 R2 Datacenter Edition, but costs are still higher for SQL Server 2012 deployments on 4-processor, 8-core and 4-processor, 10-core servers.

Even with these changes, Rossini says Microsoft's flagship database remains less expensive than either Oracle Database or IBM DB2. For Microsoft and the SQL Server 2012 early adopters we spoke to, comparisons inevitably turned to Oracle's market share-leading commercial database.

"If we can provide the same level of service [with either database], the choice is always Microsoft SQL Server," said Balitsky, who added that about 80% of the city's transactional workload now runs on SQL Server versus 20% on Oracle.

It's all about cost, Balitsky explained, noting that Oracle Database deployments are about 40% higher than comparable Microsoft SQL Server deployments. What's more, Oracle DBAs earn 30% to 40% more than SQL Server DBAs in the Virginia Beach area, she said, and it's difficult for her department to justify the higher salaries. Virginia Beach recently migrated Tow Tracker, an internally developed .Net application used to track the towing of illegally parked automobiles, onto SQL Server 2012.

A former Oracle consultant, Balitsky said Microsoft SQL Server has "come a long way" over the last seven to eight years, with "huge advancements in 2005, 2008, and again in 2012." Nonetheless, Balitsky said the two products still aren't yet comparable and she believes the city will continue to use both databases. The city's geospatial mapping system, for example, still runs on Oracle. Microsoft has stepped up SQL Server geospatial data support in recent releases, but Balitsky said the city has made too many investments in its Oracle-based deployment to make a switch. 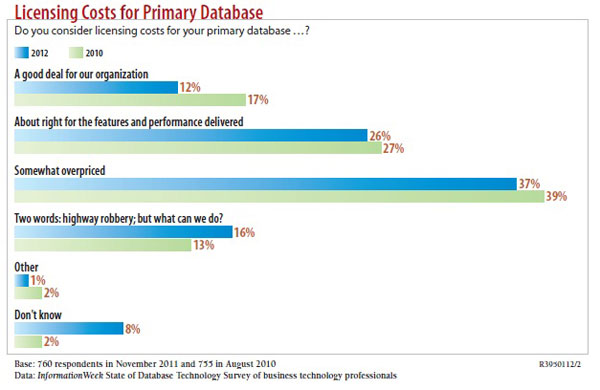 As shown in our recent "InformationWeek 2012 State of Database Technology" report, IT professionals are generally satisfied with their databases, but they put cost considerations dead last among five attributes. On a scale of one (very dissatisfied) to five (very satisfied), 760 survey respondents gave database "features" a mean average score of 3.9; "performance, security, and scalability" scores of 3.8; and "licensing cost and terms" a 3.1. And as shown above, a majority (53%) characterize database licenses as either "somewhat overpriced" (37%) or "highway robbery" (16%).

I've revised this article to remove "double-digit annual" from the description of Microsoft's BI market share gains. Indeed, Microsoft has seen double-digit gains in BI marketshare over the last five years, but it has not seen such gains every year. In 2009, for instance, Microsoft had a 8.1% market share gain, the largest of any vendor that year, according to IDC figures. But in the very latest data available, Gartner numbers for 2011 published just last week (April 2) show Microsoft BI market share was flat from 2010 to 2011 at 8.7%. Thus, Microsoft held steady as the fifth-largest BI vendor (in terms of revenue) after SAP, Oracle, SAS, and IBM, respectively. -- Doug Henschen
Reply  |  Post Message  |  Messages List  |  Start a Board
Editors' Choice
Hot Topics