MongoDB had already announced plans to include the WiredTiger storage engine with its coming 2.8 release, currently available in beta and expected in general release early next year. The company said that adding the technology to its portfolio and its veteran senior executives to its engineering team will help it address performance constraints that have always limited the use of its database.

In contrast to MMAP, WiredTiger supports more granular, document-level locking for optimized writing efficiency. WiredTiger is also more efficient than MMAP in harnessing the power of large, multi-core servers. That means customers using this alternative will be able to support bigger apps with less hardware, according to Kelly Stirman, MongoDB's director of products.

"A lot of the applications that companies are building today try to take a fire hose of data and index it and query it efficiently," said Stirman in a phone interview with InformationWeek. "Those apps need really fast, efficient writes."

In competitive bids for such apps, Cassandra is usually MongoDB's biggest competitor, according to Stirman. Cassandra was inspired by Amazon Dynamo, which was developed by the retailer first and foremost to accept database writes at high scale no matter what. Accepting writes is what enables customers to place items in virtual shopping baskets and then pay for their goods. The DynamoDB cloud service inspired by Dynamo and Cassandra favor write performance over consistency and read performance. (WiredTiger is used with separate AWS cloud services, not DynamoDB.)

MongoDB will continue to offer MMAP, which will gain more granular locking in the 2.8 release, but it's still best suited to read-intensive use cases where information doesn't change a lot, such as content-management, customer-lookups, and caching apps. 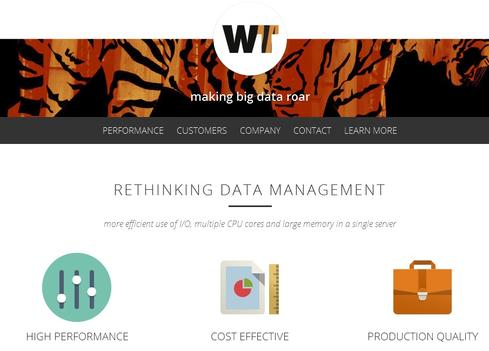 Stirman predicted that MongoDB 2.8 and subsequent releases will blow away old performance and scalability concerns. "Before we had workarounds to improve performance [with MMAP], but with WiredTirger, we won't have any of the old limitations," he said. "We'll be able to scale dramatically, and you'll see much stronger performance."

Joining MongoDB from WiredTiger will be co-founders Keith Bostic and Dr. Michael Cahill. Bostic was a founder of Sleepycat, which developed the open-source Berkeley DB key-value-store database before it was acquired by Oracle in 2006. Bostic will become a senior staff engineer at MongoDB. Cahill will become MongoDB's director of engineering.

"Our focus at WiredTiger has been to rethink data management and create high-performance software that solves the challenges of the world's most demanding applications," said Cahill in a statement from MongoDB. "Joining [MongoDB's] vast community is a huge opportunity for WiredTiger to more broadly benefit organizations of all sizes, in all industries, around the globe."

MongoDB will continue to develop the WiredTiger storage engine and offer it to other software vendors. Meanwhile, the MongoDB database might eventually support "dozens of different storage engines," said Stirman, citing in-memory engines, a Hadoop file-system engine, and SSD options among the possibilities. "The rest of MongoDB is all the same, including security features, query language, index support, and everything else, but you'll be able to pick the storage engine that gives you the best balance of capabilities for your application."

The terms of the WiredTiger acquisition were not disclosed.

Doug Henschen is Executive Editor of InformationWeek, where he covers the intersection of enterprise applications with information management, business intelligence, big data and analytics. He previously served as editor in chief of Intelligent Enterprise, editor in chief of ... View Full Bio
We welcome your comments on this topic on our social media channels, or [contact us directly] with questions about the site.
Comment  |
Email This  |
Print  |
RSS
More Insights
Webcasts
Building Asset Management into Your Enterprise Security Strategy
Data Center Network Operations (NetOps) Reimagined
More Webcasts
White Papers
IDC Market Share: How the Network Is Used to Unmask the Adversary
The 2021 Threat Hunting Report
More White Papers
Reports
The State of Endpoint Security
The Infoblox Q4 2020 Cyberthreat Intelligence Report
More Reports

As noted, the leaders from WiredTiger were also leaders at Sleepycat, where Clodera's chief strategy officer, Mike Olson, was CEO. Sleepycat sold to Oracle in 2006. According to Curt Monash, the database guru's database guru, Olson recently had nothing but good things to say about his former collegues now with WiredTiger. I should note that Cloudera and MongoDB have an alliance of sorts -- basically they've agreed to be mutually supportive, to avoid trompling on each other's turf, and to be consistent in educating customers on the respective benefits and use cases for Hadoop and NoSQL databases.
Reply  |  Post Message  |  Messages List  |  Start a Board
InformationWeek Is Getting an Upgrade!