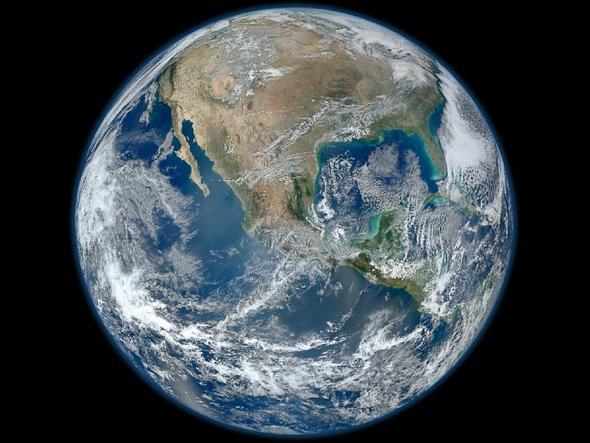 All five instruments on NASA's new Earth-observing satellite, Suomi NPP, are now operating, giving the space agency new capabilities for monitoring our planet and collecting data for weather forecasting. The data also has a secondary role: It's used to create highly detailed, composite images of the Earth.

One such image released by NASA in January has been viewed nearly four million times on Flickr, making it one of that site's most-viewed images ever. Remarkable for its fine detail and beauty, the image is a manifestation of NASA's most advanced satellite imagery and visualization technologies.

The newest Blue Marble images are composites of bird's eye views of Earth captured by the Visible Infrared Imager Radiometer Suite (VIIRS) on board the Suomi NPP (for National Polar-orbiting Partnership) satellite, launched in October 2011. NASA announced on March 7 that Suomi NPP's five instruments have been activated. The mission represents a partnership between NASA, the National Oceanic and Atmospheric Administration (NOAA), and the Department of Defense.

NASA has been photographing Earth for more than 50 years. The first grainy black-and-white photos were beamed back in April 1960 from NASA's Television InfraRed Observation Satellite, or TIROS-1, which carried two small cameras, one for capturing wide views of the Earth (from 450 miles away) and the other for more detailed views. Over three months, the satellite took 23,000 images, which were used mainly for weather forecasting.

In 2000, NASA used data visualizers to compile an image of Earth's western hemisphere using NOAA data. Two years later, the space agency produced a more detailed, "true color" rendering of Earth's surface by stitching together four months of satellite observations of land, the oceans, sea ice, and clouds. Then, in 2005, NASA created "Blue Marble: Next Generation," a year's worth of observations taken mostly by the Moderate Resolution Imaging Spectroradiometer (MODIS) on board the Terra and Aqua satellites.

With its latest Blue Marble images, NASA has gone a few steps further. The Suomi satellite flies 512 miles above the Earth, but the perspective is as if taken from 7,918 miles. NASA was able to "step back" from the planet by stitching together images taken during six orbits of the Earth and creating a single composite image. The swath of Earth's surface covered by each pass of the satellite is about 1,865 miles wide.

What's next? Robert Simmon, a data visualizer and designer for NASA's Earth Observatory who created some of the earlier Blue Marble images, says he plans on making a new version based on a single day's VIIRS data that illustrates the scattering of light in the atmosphere. Image credit: NASA