Oracle reported better-than-expected financial results for the latest quarter, and in a conference call with financial analysts Wednesday, CEO Larry Ellison predicted that its flagship 12c Database, a growing portfolio of engineered systems, and cloud software subscriptions will drive growth in the year ahead.

Results for the fiscal second quarter of 2014, which ended Nov. 30, were highlighted by a 2% revenue increase from a year earlier to $9.3 billion and earnings of 69 cents per share. Wall Street had been expecting $9.2 billion of revenue and income of 67 cents per share. The gains came against a strong prior-year quarter, and sales were flat overall. New software licenses and cloud software subscriptions revenue was unchanged at $2.4 billion. Hardware systems revenue, including product sales and support, was unchanged at $1.3 billion.

Looking ahead, Ellison and Oracle president Mark Hurd said sales of the 12c database, introduced this summer, have only just begun to kick in. That database's multi-tenancy support will appeal to cloud vendors, but the feature will also support database consolidation among Oracle's bread-and-butter enterprise customers, they predicted.

"Most of our big customers have found tens of ways to configure Oracle 8, 9, 10, and 11, and they have multiple operating systems and multiple hardware platforms, so there's an opportunity to simplify and standardize those environments," Hurd told analysts.

The idea of deploying 12c on Exadata, Oracle's leading so-called engineered system, is to manage and maintain many database instances centrally on a single appliance. "Our customers spend a fortune managing tens, hundreds, thousands of different Oracle environments and versions, and they have to patch them, upgrade them, and back them up," Ellison said. "We can simplify that and make that a more reliable and less expensive process by using the multi-tenant option on top of Exadata."

Ellison also touted a 12c In-Memory Option that was pre-announced at Oracle Open World with no roadmap or release dates. It is a competitive response to SAP's Hana platform and Microsoft SQL Server 2014. The latter includes an In-Memory OLTP feature and is set for release in the first half of 2014.

Ellison offered the first real insight into the release date. "People will start playing around with it in the second half, and as we get around to this time next year, we'll see good growth being driven by the in-memory option."

Hardware sales continued a now years-long slide by dropping 3% in the quarter, but Ellison said the sales shift away from low-margin, commodity servers is "more or less completed." Higher-margin engineered systems now account for roughly 30% of hardware sales.

Looking beyond Exadata and Exalogic, Ellison said smaller engineered systems, including the low-cost Oracle Database Appliance (ODA) and a new Oracle Virtual Compute Appliance, will drive growth in 2014. "These lower-cost engineered systems go after the mass and price-sensitive parts of the market. We expect to sell a lot of engineered systems with a complete suite of machines, not just the well-known high-end Exadata machines."

The Virtual Compute Appliance combines low-cost commodity servers running Linux with open-source Xen-based virtualization software and is "very aggressively priced," according to Ellison. The Oracle Database Appliance is $60,000 for the hardware, versus $200,000 for a 1/8 rack Exadata. What's more, Exadata requires storage-management software that costs an additional $180,000. ODA starts with 18 terabytes of disk storage and an 18-TB storage expansion shelf, bringing total capacity up to 36 TB. 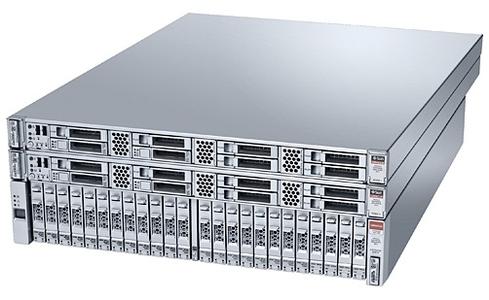 On the cloud computing front, the company reported that Oracle Fusion subscriptions increased 35% in the quarter, and Hurd and Ellison detailed efforts to challenge both Workday and Salesforce.com. Hurd said the cloud business has "hyper-growth-like" characteristics, and he noted mobile, social, and analytics capabilities built into the cloud apps. "We think these are core differentiations specifically versus Workday."

Breaking with the IT-centric selling of the past, Ellison said that Oracle sales teams increasingly engage with line-of-business executives and go head to head with "a new generation of functional specialists" in the cloud.

The numbers in Oracle's SEC filings of late have reflected anything but hyper growth, so anything even approaching double-digit gains in 2014 would be a remarkable achievement. Oracle co-president and CFO Safra Catz projected third-quarter growth of between 2% and 12% for software and subscription revenue and between 1% and 9% for the hardware division. Somewhere in the middle of those ranges lies a realistic expectation.

We welcome your comments on this topic on our social media channels, or [contact us directly] with questions about the site.
Comment  |
Email This  |
Print  |
RSS
More Insights
Webcasts
How to Effectively Analyze Security Data
5 Steps to Integrate SAST into the DevSecOps Pipeline
More Webcasts
White Papers
Cyber Security in Healthcare
Global Threats: A Combat Guide for Rising Cyber Attacks
More White Papers
Reports
Endpoint Security 2020: The Resurgence of EPP and the Manifest Destiny of EDR
2019 State of Privileged Access Management (PAM) Maturity Report
More Reports

"Low cost hardware appliances" from Oracle. I'm still struggling to put those two phrases together. The multi-tenancy feature of Oracle 12C software may prove to be the real money-maker, rekindling new license revenue. The way multiple database systems can use one core Oracle 12c system on a time-shared basis is likely to decrease a few sales in the short run, followed by an explosion of new uses in the long run. It's a great consolidate your databases, expand your database use play.
Reply  |  Post Message  |  Messages List  |  Start a Board

Interesting arguement Oracle has here. I guess they're counting on hardware sales they didn't previously get with engineered systems, but on the software side, I would guess it's more of a wash. If you consolidate a bunch of separate database instances, don't you end up cutting off lots of maintenace revenue? I guess the new sale compensates and has it's own maintenance stream, but with per-CPU pricing, you would think they're robbing Peter to pay Paul to some extent.
Reply  |  Post Message  |  Messages List  |  Start a Board
Editors' Choice
Hot Topics

How Startup Innovation Can Help Enterprises Face COVID-19 Joao-Pierre S. Ruth, Senior Writer,  3/24/2020
White Papers
Cyber Security in Healthcare
Best Practices for the Three Phases of Azure Migration
Maximize the Security and ROI of Your Azure Environment
Power Your Business With the Right Azure Strategy
Are you leveraging all the benefits of cloud computing?