In-memory performance without compromises -- that's what Oracle CEO Larry Ellison promised Tuesday in a Webcast in which he announced that the long-awaited Oracle 12c In-Memory Option will be generally available in July.

Oracle is delivering in-memory database capabilities years behind SAP's Hana platform and months behind Microsoft's In-Memory OLTP option for SQL Server 2014, but Ellison insisted "other in-memory databases came out sooner because we had a different set of goals."

Most in-memory databases "begin and end" with speeding analytical queries, Ellison said, without naming names. "We wanted to do that, but not compromise transaction processing."

Describing Oracle's architectural approach at length, Ellison said the in-memory option sticks with Oracle Database's longstanding row data approach to ensure support for "all" existing applications without changes. The in-memory option adds a columnar analytical store cached in RAM and duplicated on at least two nodes for redundancy. Ellison said the columnar store typically speeds analytical queries by 100 times and as much as 1,000 times. 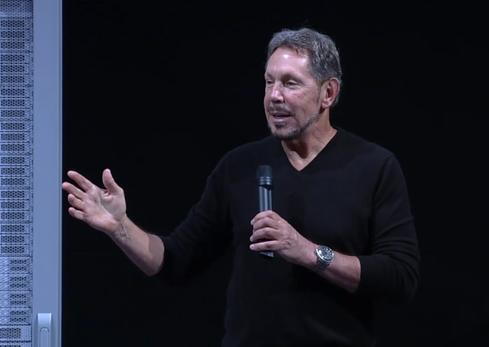 How can the database store data two different ways and still be faster, Ellison asked rhetorically. "We speed everything by dropping analytical indexes," he explained. "The transactions run faster because there are fewer indexes to update, and the column store does not have to be logged."

There are many nuances to be explored in just how indexes can be dropped without changing existing applications, but those questions did not come up during a brief question and answer session. Ellison also explained at one point that customers "simply choose the tables and partitions they want held in memory," to which a Twitter tweet asked, "What happens if a query joins tables in-memory and tables on disk?"

Stressing transactional performance, Ellison also highlighted availability and recovery features and asserted that other in-memory systems "just stop" when systems run out of memory -- another example of a non-specific accusation designed to sow seeds of fear, uncertainty, and doubt in the minds of customers considering other in-memory options.

Oracle 12c in-memory is not designed to handle all data in-memory, only active data, Ellison said, so it will be much more efficient and affordable than systems designed to run entirely in memory. On this score, Ellison was clearly leveling the charge at SAP Hana, though again he didn't name names.

Oracle is delivering 12c sooner than expected, and it's promising a lot without the pain of changing applications or migrating data, says Ellison. More than a dozen testimonials from customers including Yahoo, Land O Lakes, Thales Raytheon Systems, Mitsubishi, NetSuite, and others backed up the performance claims.

Our follow-up coverage will dig into the details to explore whether there are compromises Ellison didn't discuss.

Doug Henschen is Executive Editor of InformationWeek, where he covers the intersection of enterprise applications with information management, business intelligence, big data and analytics. He previously served as editor in chief of Intelligent Enterprise, editor in chief of ... View Full Bio
We welcome your comments on this topic on our social media channels, or [contact us directly] with questions about the site.
Comment  |
Email This  |
Print  |
RSS
More Insights
Webcasts
Disaster Recovery/Business Continuity in the New Normal
The Experts Guide to Ransomware Response
More Webcasts
White Papers
Top Serverless Security Risks and How to Mitigate
Ransomware Security Breach Summary: Food Production
More White Papers
Reports
The State of Cybersecurity Incident Response
Dark Reading Report: Battle for the Endpoint
More Reports