9 comments
Comment Now
The Windows 10 rollout has officially begun. Here are five reasons we're excited about the OS, and a few concerns for its future. 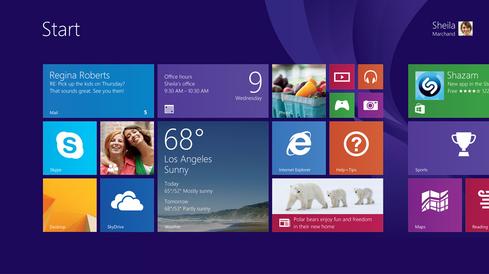 Why It Matters: It's Not Windows 8

Nobody -- not consumers, businesses, or developers -- liked Windows 8. The interface revamp, which proved frustrating to anyone hoping for familiar laptop or desktop functionality, was enough to encourage most people to stick with predecessor Windows 7.

There's a touch of Windows 8 influence in the new OS, as Microsoft decided to combine features from both Windows 7 and 8 in the Windows 10 design. The desktop is reminiscent of Windows 7, but the Start menu (which is back at home in the lower left-hand corner) consists of Live Tiles you'll recognize from Windows 8. These provide access to a customizable collection of apps, including Mail, Calendar, News, Photos, Music, Weather, and the Windows Store. Instead of taking up the full screen, the tiles don't pop up until you access the Start menu via the Windows button.

Windows 10 is generally better designed for desktop use. Windows 8 was optimized for touchscreens, a tremendous mistake that left PC users navigating tablet mode with a mouse and keyboard. The fresh design accommodates PCs and tablets with modes for each type of device; hybrid products, such as the Surface, can transition between the two by adding or disconnecting a keyboard.

The bottom line: if you're running Windows 8 and hate it, do yourself a favor and go for the free upgrade. Chances are, you won't be worse off.

I got all excited after I updated my desktop. Now on to the laptop.  Not so excited anymore. Laptop is kaput.  Waiting for Lenovo to replace the machine.
Reply  |  Post Message  |  Messages List  |  Start a Board

A good number of PCs inside companies with Volume Licenses still come pre-loaded with Windows so there isn't much that should be different in those cases.  I haven't heard anything from my Microsoft reps on this but have had no trouble upgrading a handful of test boxes so I don't think that Microsoft is making the rules different in this case.  As long as you already have Win 7 or 8 installed they want you on Win 10.
Reply  |  Post Message  |  Messages List  |  Start a Board

I don't believe people on Volume Licensing will be getting Windows 10 as home users will. I don't even think they will be getting the free upgrade either. Kelly might know that better though.
Reply  |  Post Message  |  Messages List  |  Start a Board

Problem with Windows 8 - Metro/Modern didn't work for old folks at home or younger people at work who weren't using tablets - too much like Apple to those of us who HATE Apple - last gift from Steve "I'll tell you what you want and you'll like it" Balmer. Problem with Windows 10- wasn't one until Microsoft started telling us 10 will be the last Windows. Not a smart move because I don't to buy the last of anything.
Reply  |  Post Message  |  Messages List  |  Start a Board

I've installed on a few machines already, the UI improvements are enough that I would tell Win 7 users to jump over 8 and go to 10 now.  Anyone who was using Win 8 will adapt quickly so the upgrade there will be very smooth for them.   I'm seeing now on home PCs that the update is automatically downloading and inviting users to upgrade.  That's a pretty bold move on Microsoft's part and luckily either they aren't pushing that on volume licensed PCs or the domain registration is preventing that little feature.  I think a lot of IT groups would lose their minds if that happened inside their corporate network.
Reply  |  Post Message  |  Messages List  |  Start a Board

The July 29 rollout will be limited to Windows Insiders

I'd like to point out that Build 10240 is the RTM. I've been playing around with this Build for a few days now. As the author says: "a work in progress". Nonetheless, I will recommend Windows 10 to pretty much everyone with Win 7 or 8,
Reply  |  Post Message  |  Messages List  |  Start a Board

The continual overhyping of Win10 greatly amuses me since MS heavily borrowed from Linux for its "new & improved" features.  For years, Linux users have enjoyed the "innovations"  MS now touts for Win10.
Reply  |  Post Message  |  Messages List  |  Start a Board

"Nobody – not consumers, businesses, or developers – liked Windows 8. "

Well not at first, it was a very big step going from Windows 7 to 8 but 8.1 eased a lot of that frustration.  The problem is people want new things but they have limits on what you can change.  Microsoft pushed the Modern UI too hard and nearly died on that hill.  I think another of the article's points comes in to play here the PC market is shrinking.  People are carrying computers with them everywhere they go, there is a different expectation and software companies have to keep that in mind.
Reply  |  Post Message  |  Messages List  |  Start a Board
Editors' Choice
Hot Topics